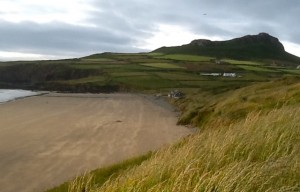 When the clattering helicopters, and the ominous motorcades with chunky black president-carriers much bigger than we used to have gone, the Wales of that very tempting Welsh Government video remains.

President Obama is unlikely to return before the third week of January, 2017, when, under the constitution, he has to leave the Oval Office. (He would do better to wait until the spring, when Wales can be quite glorious.) But the land of poets and castles and rugby posts and estuaries and warm welcomes everywhere is open to the rest of us.

The Welsh Government film contained all the visual triggers, from the mountains to the Welsh rugby team walking out at the Millennium Stadium. But, interestingly, it also engaged the services of the Welsh diaspora, of which I’m a very minor member, with a “come back and look in” undertone.

President Obama would certainly have recognised Damian Lewis, who, as  a very American Sgt Brodie in Homeland, briefly became an American congressman. He described himself as a “London Welshman”. And his wife Helen McCrory gave us an invitation to visit Wales. She was born in London to a Welsh mother and Scottish father. On the very night the president and 60 world leaders were dining in Cardiff Castle, her searing Medea was being broadcast live from the National Theatre to cinemas across the US, and the world.

The “Where shall I start?” question is redundant in Wales.  Step over the border, and you’re there. You could certainly begin just beyond the Severn Bridge. Monmouthshire and the Wye Valley may not be “Deepest” Wales, but, to my eyes, it is as much authentic principality as Conway or Carmarthen. After all, you wouldn’t call Gloucestershire on the other side of the bridge “only just England”.

When I lived, and went to school, in the south, and my parents didn’t have a car, Wales felt awfully big. North Wales was further away than London. Mid Wales, not much better. It didn’t help that they closed most of the railways, so, today, you have to go up through England to get from, say, Cardiff to distant Llandudno.

Some railways did survive through the west and the centre of Wales, which is hard to believe when Dr Beeching’s axe was so sharp. And now, to coincide with the big focus on Wales, they are being promoted as they never were in the old days, as an important part of tourism, where you park your car and see Wales through a train window.

The Show Me Wales Rail Trails project is promoting three of Wales’ most scenic railways – the Conwy Valley Line in the north; the Cambrian Lines through the centre, then curling up and down the west coast; and the Heart of Wales Line. The last of these, 121 miles to the South Wales coast between Shrewsbury and Swansea, is one of the few regular journeys in southern Britain that qualify for the description “epic”. This is an account of the journey I took on it.

The railways connect all four sides of Wales, from Conwy in the north to Swansea in the south and from Shrewsbury in the east to Aberystwyth on the Cardigan Bay Coast. Indeed you access all three lines from Shrewsbury, which must make it the most important gateway town, for Wales, in England.

This promotion comes from MWT, an organisation represents 600 tourism and hospitality businesses in Wales. MWT is encouraging businesses – hotels, guest houses, bed and breakfasts and tourism attractions along the routes – to offer discounts to visitors who arrive by train.

MWT is developing a Show Me Wales Trails app, suggesting itineraries, things to do and places to visit. The trails include the Wales Coastal Path, Offa’s Dyke Path, and Glyndwr’s Way. I walked part of Glyndwr’s Way recently.

Join the first two together, and you have an all-encompassing 1027 mile walk around the entire country, which, if you take out small islands, is said to be the first in the world.