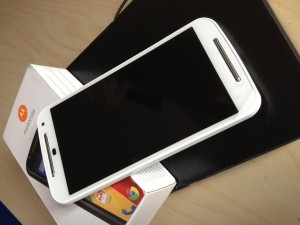 Motorola, the company that gave the world the first mobile phone, has come up with what could be the world’s most affordable smartphone. The new Moto G, an upgrade to the original model released in 2013, was unveiled last week (September 2014) – it costs £144 ($179.99) – along with some other intriguing items in the company’s new product range, among them a classically-designed watch which is also and (possibly) computer the world’s most discreet wireless earbud.

In the early 1990s, before technology began to move at warp speed, I walked the banks of the River Thames to research a book.

What I needed on that trip was a camera, a tape recorder to make notes, and a portable radio to listen to while I walked.  So I carried these as three, bulky, separate, and expensive non-digital items.  In those days the intrepid expeditioner couldn’t imagine doing it any other way.

We had modest expectations from our technology, and Moore’s Law, operating from a very slow starting point, was bringing barely perceptible advances. The very idea that, well within 20 years, we would have a single, pocket-sized device that did all those things, and so much better, and would also allow me to telephone and message the world, plot my position to within a few metres, and research anything of interest I saw on my way, would have been quite preposterous. And the notion that I could be dictating my book with precision on this same thing, as I walked?  Pure science fiction.

This is a leisurely preamble to introduce a new smart phone I have just acquired, the second generation Motorola Moto G, but it might be instructive, particularly to younger readers who take these devices utterly for granted. (It is also a reminder of how rapidly things can develop, and who knows what unforeseen technological benefits await us in the next 20 years – my hopes are in health, in the car and in the home.)

You are surely saying: Hang on, smart phones aren’t exactly new. You’ve been able to do all these things for some years now.

So we have. I’m embarrassed to admit that I have racked up a considerable bill since I acquired my first smartphone, on expensive monthly contracts for a device, as useful as it was, that I would have considered simply too expensive to buy up front. So, like most people, I blanked out the financial implications, and carried on paying those monthly charges.

The Moto G Is different. It is a smart phone of a very high order and specification, yet it costs just £144. (Unlike the new Apple iPhone, it was available in the UK the day it was announced, September 5, 2014.) If I only use it for those three functions in my  introduction, I am already making a considerable saving, in a highly convenient single package. I can then pay what I decide for as much data – emails, texts and web searches – that I need. I can download apps to perform many more functions, from checking the weather to monitoring my heart rate.  And, of course, I’m dictating my book is as I go. I still marvel at that.

Motorola Mobility has been nimbly re-establishing itself in the market since Google sold the smartphone business to Chinese company Lenovo earlier in 2014. Google had acquired Motorola Mobility in 2012. It was spun off from parent company Motorola, the early trailblazer in the mobile phone sector. (Google holds onto most of the Motorola Mobility patent portfolio.)

It was a major force in the industry, the first company to introduce the cellular phone. It pioneered the “flip phone” and  the “clam phone” in the mid-1990s, and came back in the mid-2000s with the RAZR, before several years of financial difficulty.

The Moto G, based on a pure Android platform, was one of the first fruits of the new company, brought out late in 2013. It quickly became the best selling smartphone in Motorola history. Nine months on, the latest version, known simply as the “new”, has a larger 5-inch display (replacing the previous 4.5-inch one) and weighs 149g. It measures 11.3mm from the front of the screen to the thickest part of its gently curved rear panel. Gorilla Glass 3 protect the screen from scratches. It has a quad-core 1.2GHz Snapdragon 400. “Performance initially seems quite stellar for the specs,” said one early reviewer.

The main camera is 8 megapixels (up from 5), with a wider, f/2 aperture, which should make shots in low light sharper. The front camera is 2 MP. (Do people using them for anything other than selfies?) There are other tweaks  and upgrades, such as the addition of a microSD slot, which supports cards up to 32GB. It’s available in single and dual-SIM versions.

The Moto G has two speakers. Its batteries should keep the phone running for a full day. Its preloaded Migrate app lets the user pull in personal data from an old phone, including iPhones. Voice Actions lets you make a Google Search, navigate to a destination, make notes, set an alarm, and send an email or text with just your voice.

To return to the price, Motorola makes the point that smartphones are expensive. In 2013 the average price was $337. A top-tier smartphone might cost well over $500. To its credit it acknowledges that less well-off people, and as the UK comes out of recession that includes many of us, should be able to aspire to these things too. Yet until recently this remarkable device has been beyond them. 70% of mobile phone users in the world, Motorola notes, are using phones that can’t unlock the “full potential of the mobile Internet” .

The company says it wants to radically transform the mobile industry by making quality smartphones much more widely available. At £144 ($179.99), the G becomes very attainable. (To put that cost into perspective, in the mid-1990s an early laptop computer with primitive specifications would cost almost £1000.)

When the deal was signed, Motorola said it had set its sights on bringing mobile Internet to the “next 100 million people” and it saw Lenovo as the perfect partner to help achieve that goal.

Don’t think of Motorola as simply a purveyor of inexpensive smart phones. Its new Moto X holds its head up at the stylish end of the market, selling from £419.99. Customers will be able to customise the look of their Moto X, through the online Moto Maker ordering portal, in a wide selection of colours and patterns, and have their signature or motto engraved on it.

The company launched one genuine innovation at its UK presentation, held appropriately at the Hoxton Hotel, close to East London Tech City (Silicon Roundabout) last week. It is the Moto 360, a “wearable”, in effect a classically-designed watch which is also a computer, connected by Bluetooth to a smartphone. Glance at it to see updates, or issue voice instructions. It includes a pedometer and heart rate monitor. The 360 starts at £199.00. (It will be available from O2, Tesco, Amazon and John Lewis from early October.)

Will the next new item, the Moto Hint, finally make the mobile phone Bluetooth earpiece a desirable fashion item? Motorola says the Hint is the smallest and most discreet “wireless earbud”. It gives users complete control of the phone. Moto Hint will work with any phone.

Something I would have found useful on many occasions this year is the Power Pack, a small battery that provides instant back-up power. You attach it to your keys or keep it in your pocket or bag. Along with the Hint and the 360, it is not available in the UK yet.