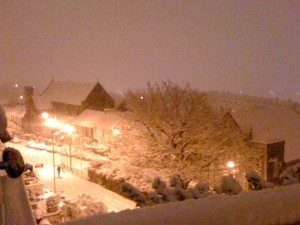 Dickens started our passion for Christmas books, but who has time for the whole of Pickwick Papers, unless you just read the snowy, seasonal scenes? A Christmas Carol is a possibility, but, weighed down with Victorian sentimentality, it lends itself to cinematic or theatrical adaptation rather then a comfy read in an armchair.

I turn to the accessible children’s stories, easy to devour over a glass of mulled wine and a few mince pies.

One of my favourites, The Story of Holly and Ivy, was originally set in Aylesbury, my local town, and I think it still belongs there despite the change made in later reprints, which placed the story in Appleton.

My favourite of all Christmas stories, A Child’s Christmas in Wales, surely belongs in  Swansea, the hometown of its author Dylan Thomas. The city is not referred to by name, although there are geographical hints, such as the two men with pipes striding down to the sea.

No matter, because that is how Dylan wrote it. In The Story of Holly and Ivy, it was someone’s change of mind. The author or the publisher? You can’t add to the magic of Dylan’s story by naming Swansea. But you can detract from the magic of Holly and Ivy by taking Aylesbury out.

I wrote the article below after a visit to Dylan Thomas’s house in Cwmdonkin Drive.

Oh, and Swansea can be as white as Lapland in December, as the picture shows.

In the deep repose of an old Welsh front parlour in Cwmdonkin Drive, furnished for the early years of the last century, before the days of TV and radio, I conjured up the ghosts of Christmases past.

I could see the Uncles in my mind’s eye, jolly ruddy-faced men tentatively holding their cigars at arms’ length “as though waiting for the explosion.

“Then the Aunties in the scullery, busy with tureens, flushed with a surreptitious tipple. And upstairs in his cramped bedroom, a small boy sifting through his presents—“the useless and the useful.” That boy was Dylan Thomas. This was his home, and these very rooms inspired his “A
Child’s Christmas in Wales.”

It’s now possible to stay in the setting for that perfect piece of seasonal nostalgia (bring your own uncles and aunties for your own re-enactment, if you like), something which so many of us return every year, along with “It’s a Wonderful Life” and “The Snowman”. And, when you are there, perhaps
commune with the muse that inspired Dylan, who was one of the great 20th-century
poets writing in English despite his reputation as a liquor-fuelled hell-raiser.

5 Cwmdonkin Drive, the solid, semi-detached house on the steep hill in
genteel west Swansea, one of the most important addresses in British literature, is
safe for posterity. A local couple, dismayed at its poor condition
71 years after the Thomas family moved out, restored it to the home
Dylan would have recognised in the 22 years he lived here. It’s available for stays,  and open to visitors when there are no guests.

I climbed Dylan’s famously steep “chilly, glinting hill” from “A Child’s
Christmas”, up from the broad sweep of the bay and, pausing for breath,
glanced back to his “carol singing sea.” I knocked at number 5. Geoff Haden
opened the front door and drew me instantly back into the tumultuous months
of late 1914 when D.J Thomas and his heavily pregnant wife Florence moved
into their brand new house.

A scattering of casual domestic particulars immediately fixed the house in
its time – stair rods on the stair carpets, a glimpse of lino in the
parlour, some hefty Welsh dressers. But the most striking detail was the
bold, and it turned out entirely authentic, burgundy paint in the stairway.
This vivid alcoholic hue must have been etched into the passionate poet’s brain
from early babyhood.

With its mix of the new, the second hand and the hand me downs, this is how
the house must have been as the Thomases prepared for the birth of their
son in the front bedroom in October 1914. But Geoff and Anne Haden are not
creating a museum, where people shuffle through the rooms behind ropes,
muttering reverentially. Dylan would have found the idea ludicrous. The
house they have remade is to be stayed in, and enjoyed, as a living monument
to a man of words.

“We wind the clock back to 1914,” said Geoff. “There is no TV,
radio or telephones. And mobile phones have a terrible signal here too, so
everything conspires against you communicating with anybody other than the
people you are with.”

Geoff is a Swansea man himself. He attended the same school as Thomas,
five years after he died after a session of heavy drinking in New York City
in 1953. He and Anne felt their city had neglected its famous son. When
he was alive, strait-laced Swansea seemed uneasy about its association with the vagabond poet. (That was corrected in 2014, with comprehensive celebrations for the centenary of his birth in Swansea and London and many other places.)

Beyond the city his fame was more assured. John Lennon put him on the front
cover of the Sgt Pepper album cover. And President Jimmy Carter opened the
Dylan Thomas Centre in Swansea in 1995. “We invited him to the opening of
the house, and he sent us a note of good luck.” Bill Clinton, another Dylan
fan, did not reply.

The couple first saw the house in 2004, around the 50th anniversary of
Dylan’s death, when it was briefly open to visitors. There had been a number
of private owners since Thomas’s parents sold it in 1937, Dylan having moved
to London a few years earlier. “I was horrified,” said Geoff. “It looked
like a rundown student bedsit.” The couple resolved to rescue an important
piece of literary heritage.

(Purists may argue that Thomas never lists the address of the boy’s house in
A Child’s Christmas. Nor does he identify the child as himself. But there
is no doubt that Dylan set the charming fantasy, first published in
Harper’s Bazaar in 1945, in and around his own home. Take away the
meteorological hyperbole – severe Arctic winters are rare in South Wales –
and the clues in the story are compelling. Not least the reference to Swansea’s  Mumbles Road.)

They negotiated a 30 years lease with the owner, a local solicitor, who must
give them first option to buy if he decides to sell. Apart from a few
original fireplaces and doors, nothing remained, so the Hadens scoured the
auction rooms, second-hand shops and antique stores of the locality. They
issued media appeals for furniture and fittings from the first part of the
20th century, and gradually filled the house with authentic period detail.

They found beds and mirrors, a Swansea-made piano, and an old bath on legs,
now expertly re-enamelled. People donated old Welsh blankets, a mangle
for the washroom, and a little push lawnmower. They tracked down an original
cooking range for the kitchen, where the Aunties gathered (it cleverly
covers a modern cooker, to make life easier for guests). They rebuilt the
wash room in the backyard, where Auntie Hannah sang “like a big bosomed
thrush.” There used to be a gate here, where Thomas’s father would escape to
the pub. So they put it back, although it doesn’t open as houses have been
built since behind the property.

Internally the shape of the house is much as it was, with only a few doors
moved and walls altered. The Hadens restored doors and walls to their
original positions. Craftsmen repaired and revived period details, such as
sash windows. Tiles in the original pattern were found in the local DIY
superstore. Authentic period light switches were sourced in
Australia, and were delivered in days.

Crucially the walls had not been re-plastered, a process that would have destroyed the original decoration. The builders stripped them down and discovered traces of the paint applied in 1914. A local paint store made an exact match. So the shade of burgundy in Mr and Mrs Thomas’s bedroom and on the stairs, the pea green on the landing, and buttercup yellow in Dylan’s sister’s room, were exactly as they were when the house was new.

“We were surprised at the brightness of the colours,” said Geoff. “Somebody came in
and said they were too modern. But that’s exactly how they were in 1914,
when this was a `modern’ house.”

The large high-ceilinged front bedroom retains the original fireplace that
would have warmed the arrival of Dylan on October 27th 1914. Geoff Haden
believes the growing boy would have moved from room to room to write his
poems and short stories, including “And Death Shall Have No Dominion”,
written here when he was 19. But the real emotional thunderbolt strikes in
Dylan’s own cramped bedroom. He described it as so small he had to come out
of it to turn around, and so cold he had to stand against the airing
cupboard for warmth.

The room has the only gas lamp in the house. And so, on December 25, some
lucky person will be able to turn the gas down, snuggle into the single bed,
say some words to the “close and holy darkness” and sleep.