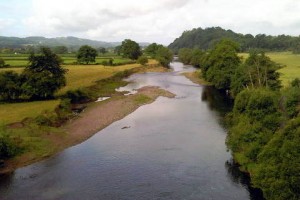 Follow the M4 all the way to the end, and you come to green and pleasant Carmarthenshire. I took a trip to the historic county in West Wales. My don’t miss list includes a mighty ruined castle, one of Britain’s finest botanical gardens, a top bird reserve, a Roman gold mine and a famous poet’s waterside home.

This county full of history now has a 21st-century masterpiece. The National Botanic Garden of Wales opened in 2000 on a stretch of ancient parkland. Its startling centerpiece is the world’s largest single-span glasshouse (designed by Norman Foster). Glistening on a hill like a giant raindrop, it doubled as a colony on Mars in a recent Doctor Who episode. Inside they conserve rare plants from regions with a Mediterranean climate.

The garden as a whole offers a wonderful ramble through a mosaic of lakes, streams, marsh, woodland, meadows and formal gardens. There’s even a national nature reserve. I found Wales’s rarest tree, Ley’s whitebeam, grown here from a cutting. Only 17 survive in the wild. www.gardenofwales.org.uk

This big county’s varied attractions range from the Dolaucothi Roman Gold Mines, to the Pendine Museum of Speed, where the world land speed record was set on the seven mile long beach in the 1920s. Add in Carmarthenshire’s five castles, and you’ll probably need a car. But there are green public transport options. The  railways include the Heart of Wales Line – milk churns, Bernard Cribbins look-alike porters from the Railway Children, and racing pigeons in baskets wouldn’t look out of place. This epic route provides easy riding into some splendid landscape. From Llandeilo I explored north to the little market town of Llandovery, next to the Brecon Beacons. Then to the handsome county town of Carmarthen, on the coast-hugging line from Llanelli. www.heart-of-wales.co.uk

The turbulent poet Dylan Thomas lived at many addresses with his wife Caitlin. But he was happiest in his “seashaken house on a breakneck of rocks” – the Boat House in Laugharne. It was here, his last address before his drink-fuelled death in New York in 1953, where he wrote Do Not Go Gentle into That Good Night, one of the most quoted of modern poems. The house, overlooking a serene tangle of inlets west of Carmarthen, is restored inside to look much as it would have in the Thomases’ time. There’s an exhibition of his work and life throughout. (www.dylanthomasboathouse.com). Then I called at the Owl and the Pussycat tea rooms for tea and an excellent slice of bara brith (Welsh fruit loaf).

King of the castles

Is Carreg Cennen castle, high on a 325ft crag on the western flank of the Brecon Beacons National Park, the ultimate romantic ruin? This is one of the citadels Edward I built in the 1200s to terrify the Welsh. After backing the wrong side in the Wars of the Roses, it was partly demolished in 1462. But the castle is still a commanding feature, towering above the fields and woods. (Privately owned by the local farm, it is open to the public). I took the steep but well-maintained path to the top, as inquisitive sheep looked on. My rewards for this exertion were a splendid view into the blue beyond; and the delicious cawl (thick vegetable soup) and home-made cake in the cafe on the way back. http://carregcennencastle.com

There was perfect hush in the Heron’s Wing Hide at the National Wetland Centre Wales, Llanelli. We peered through a wooden slat over a quiet lake, jam-packed with rare and splendid waterbirds. The helpful expert next to me pointed out the stars in a whisper. “Look, a little egret. And a black-tailed godwit, and some greenshank.”  The lakes, pools and lagoons on the Burry Inlet is one of the latest, and most remarkable, of Wildfowl and Wetlands Trust reserves that speckle the Britain coast. This one was forged from a land blasted by 200 years of heavy industry. Explore  by canoe, trail the meadering paths by bike, or stay in the warm and spot pink Caribbean flamingos.

Llandeilo is a delightful surprise, 9 miles from the end of the M4, and a stop on the railway up from Swansea. This pretty little town on a steep hill boasts a castle, Wales’ oldest single-span river bridge (with a glorious view down the river Teifi), recently-discovered Roman remains, a church rebuilt by Sir Gilbert Scott, smart specialist shops, and a sprinkling of fine 19th-century houses. It’s a good base for a Carmarthenshire visit. I stayed in The Cawdor, a listed Georgian building in the town centre recently turned into a boutique hotel, with a good restaurant. My big room on the top floor had wooden beams and floors, lots of cosy corners where I could sit and read, a large bathroom (with, ahem, a double shower) and views down into the town and the abundant green fields beyond.