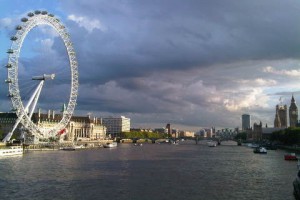 West London is famous for its palaces and parks, trendy shopping and smart eating in Knightsbridge, Kensington and Chelsea.  Gareth selects his personal selection of six things to do to the west of Oxford St.  And the highlights the Kensington and Chelsea Festival, which takes place in October.

Twice an hour the lights go up briefly at the Victoria and Albert museum on one of the world’s oldest and finest carpets. There are many copies of the Ardabil carpet, with its intricate swirl of leaves, stems and flowers, including one in 10 Downing Street, but none comes close to the glory of the original (34′ x 17′), woven in wool and silk in Persia in 1539. Since 2006 it has been rolled out, horizontally, for  the first time since 1892, as the centrepiece to the new Jameel Gallery.

Low lighting is part of a delicate conservation regime to conserve the radiant colours. While you wait for the lights to rise,

catch the superb supporting show of more carpets, ceramics, textiles, metalwork, glass and woodwork, the fruits of 1000 years of  Islamic creativity from around 900 to 1900. Admission free. www.vam.ac.uk

Let New Yorkers boast about Central Park. London has much more ancient bragging rights. Its string of parks, Hyde, Kensington and Green, are scattered like green gems west from the end of Piccadilly. All three are ideal for year-round meandering, (or horseriding, cycling or rollerblading) though a broad latticework of trees and greens, with lakes and birds and boats and endless interest, with the rest of London proud against the horizon.  My top three Hyde Park spots are the Princess of Wales fountain, the  Peter Pan statue and the babble of free speech at  Speakers Corner. Then, coining the line from This Happy Breed, filmed in Hyde Park,  “.. go for a nice cup of tea” at the newly refurbished Dell or Lido Restaurants, down by the Serpentine.

We slipped away from the King’s Road bustle, sauntered down the quiet elegant Chelsea byways to  London’s “Secret Garden.” Founded in 1673, the Chelsea Physic Garden is a magnificent homage to pioneering British horticulture, crammed with 5000 species of high benefit medicinal plants. It stars Britain’s biggest (outdoor) olive tree, and oldest rock garden, made with stones from the Tower of London and Icelandic lava. October’s highlights include the Toothache Tree, now ablaze with orange berries; some fruiting pomegranates; Common Quince laden with its aromatic fruits; and the Blue Enigma, with flowers of an amazingly intense azure. When we ordered our food at the cafe, they let us find a space on the lawn, where the waiters found us. www.ChelseaphysicGarden.co.UK. £6.50 adults

It’s probably the planet’s best known performance venue (100m worldwide watched the Last Night of the Proms) but the Albert Hall is a big comfortable overcoat of a location year-round, with a play list for everybody, from Carmina Burana and the Massed Welsh Male Voice Choirs to the Moody Blues and Bootleg Beatles coming up this year.

I can vouch that a big concert flat-out in that huge space tingles like nothing else. Daily tours show you the pomp and the secret recesses of this proud place.  www.royalalberthall.com

Then take the tour of the nearby Albert Memorial, the prince consort glimmering under his new patina of gold. They take you inside the fence for a close of up of intricate friezes, marble figures and gilded bronze. 020 7495 0916.

Here’s living proof they can build a brand new pub in the fine familiar old style, anywhere. The Thomas Cubitt has all the all oak panelling and warm, wood floors of the hostelries of yore, with three big roaring fireplaces. This Grade II-listed building in the heart of Belgrvia (nearest station Victoria), is a homage to the builder who created nearby Belgrave and Eaton Squares. On my visit they were spilling onto the pavement — a sure sign the landlord is getting it right. We ordered a watercress and baby gem lettuce salad with Stilton, balsamic pears and roasted pine nuts (bar snacks well under £10). We drank Nellie Dene Bitter and Aspalls Cider. There are good wines an cocktails and, for weekenders, all day Sunday Roast. There a full restaurant upstairs

The fourth annual Across the Street, Around the World festival ((4 – 23 October, 2010 www.rbkc.gov.uk/acrossthestreet ) celebrates the cultural diversity and artistic impact of Kensington and Chelsea.

West London supports a diverse and flourishing arts scene: it includes festivals, music venues, galleries, theatres, arts centres. During the festival events commissioned by the Royal Borough of Kensington and Chelsea will draw upon the artistic, filmic and musical heritage of West London.

The festival will be launched on 4 October with reggae poet Linton Kwesi Johnson reading from his own works, and exploring the history of the black community in the borough.

DJs will make a journey through the borough’s music from early calypso to the sounds of broken beat in Portobello Reloaded on 22 October at Inn on the Green. Portobello ReCollection is a 100 metre graphic depiction along Portobello North Wall of the songs, artists and musical trends that have shaped Notting Hill.

The Middle East will fuse with Western classical music in a collaboration between Opera Holland Park and Chelsea Music Academy on 19 October. The best of the Nu-Jazz movement will be showcased at One Night Affair at The Tabernacle on 5 October.

Two events, led by leading black independent film-makers, will debate the impact the area has had on the film industry.  Horace Ové will screen his 1986 film Playing Away and will discuss the influence of black film in West London with director Koltan Lee on 14 October.

Local filmmaker Ronan Pollock debuts Score Against the Law at the Royal College of Art on 15 October. His work looks at the legacy of Caribbean and Moroccan immigrants to Ladbroke Grove from the 60s to the 80s, told via the story of local immigrant football teams.  The Portobello Film Festival will also screen its best films of 2010 on 21 October.