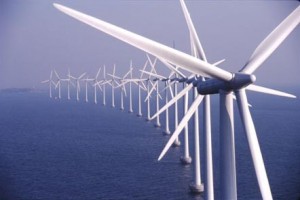 When will we love wind? Photo - sustainabilityninja.com

What are we to make of the biggest windfarm in the world, which opened seven miles (12km) off Foreness Point in Thanet, on the Kent coast this week (Thursday, September 23, 2010)?

The building scheme which has been exercising the media this week is the Commonwealth Games village, and the attendant structurally-suspect infrastructure in New Delhi. That’s been a fiasco, and the BBC, to name just one, has correctly represented the breadth of criticism.

You’d think, then, that a project that will potentially power 200,000 houses, the size of a small city, would draw correspondingly positive coverage. Particularly as the 100 turbine installation is a significant step on the road to reducing the UK CO2 emissions. But the two presenters on the Radio Five Live Breakfast programme seemed to see their role as speaking on behalf of a sceptical nation, or at least that’s how it sounded this side of the radio set.

A spokesman from Swedish energy company Vattenfall, who built the £780m wind farm, was given the heavy treatment — “how much did it cost?” “Did have a subsidy?”

The story was trailed with a “vox pop” from one man who didn’t like it – it sounds like the same (unnamed) person that http://www.bbc.co.uk/news/uk-england-kent-11395964

quoted: “I don’t like them. I look at the (turbines) and I think they’re an eyesore quite honestly.” This was in support of the programme’s line that opinion was divided among local people.

The caption for the photo in the BBC online story was “Some local residents say the wind farm is an eyesore.”

BBC Five Live’s Breakfast  managed to slip in a quick text from somebody who said wind turbines kill birds.

Which, of course they do, along with heavy lorries, plate glass windows, overhead power lines (from coal powered power stations) and any number of everyday features in our landscape.
The trouble with these uninformed and partial texts that they plant an idea in people’s minds, or reinforce a prejudice, which itself isn’t questioned or corrected until some time later in the programme — by which time many people who heard the first text have gone off to work or whatever.

I did a quick search and came up with the following from http://www.rspb.org.uk/ourwork/policy/windfarms/index.aspx;

“How do wind farms affect birds?

The available evidence suggests that wind farms can harm birds in three possible ways – disturbance, habitat loss or damage (both direct or indirect), and collision. Poorly sited wind farms have caused some major bird casualties, particularly in Tarifa and Navarra in Spain, and the Altamont Pass in California. At these sites, planners failed to consider adequately the likely impact of putting hundreds, or even thousands, of turbines in areas that are important for birds of prey. Tragically, killing many hundreds of birds as a result.

If wind farms are located away from major migration routes and important feeding, breeding and roosting areas of those bird species known or suspected to be at risk, there is a strong possibility that they will have minimal impact on wildlife.”

There is a powerful opposition to land wind farms pretty well everywhere in Britain. Perhaps we should be looking more favourably on giant schemes like this that will,  potentially, produce an awful lot of CO2-free power, and place the UK, suddenly and unexpectedly, into a position of a world leader in this particular form of energy production.

And if you think that any big new scheme should approached in a questioning, even sceptical,  frame of mind, particularly when it involves the spending of public money (which this doesn’t), compare and contrast with the near universal praise for any building work to do with the London Olympics, which very much is financed by you and my money.