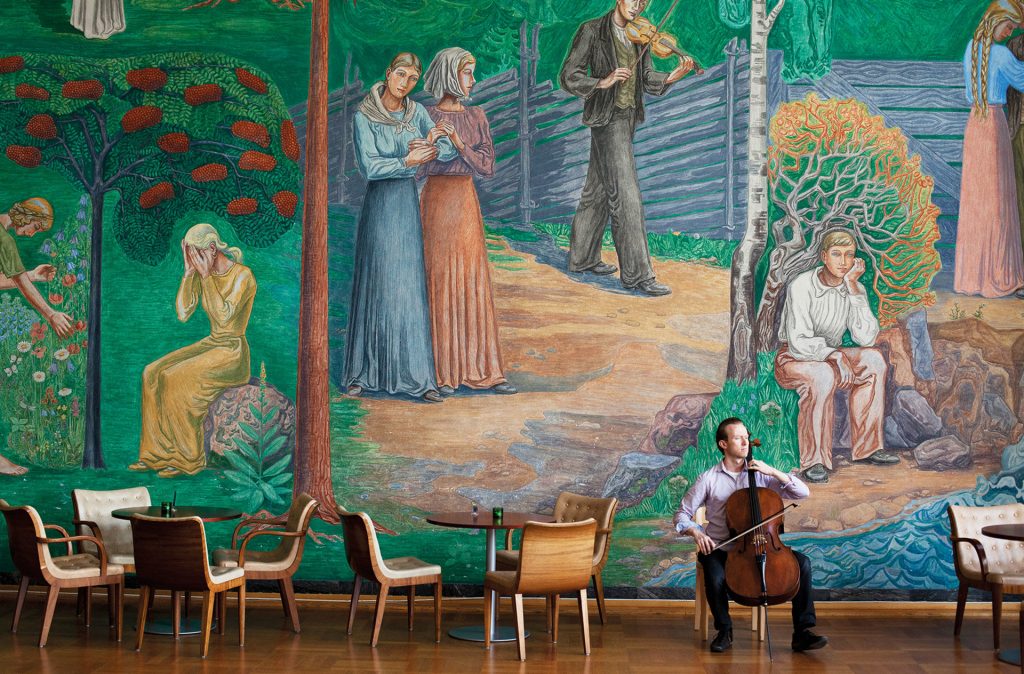 This clean, green city on Sweden’s western shore (Goteborg in Swedish) is a comfortable introduction to Scandinavia. I took a short break. There are canals not so unlike Amsterdam’s, monster cinnamon buns, another of the world’s most exciting young orchestra conductors (the last was Dudamel), bags of Swedish style, and taxi drivers who speak perfect English.

If you want to test how comfortable a green future might be, buy a transport ticket in Gothenburg. Electric buses run on route 55 between Chalmers/Johanneberg Science Park and Lindholmen Science Park, via Avenyn, Brunnsparken and Götaälvbron. The buses run quietly and free from exhaust gases, powered by 100 % renewable electricity.  www.vasttrafik.se. New electric articulated buses are on line EL16, which is part of Västtrafik’s line 16. Regular tickets apply on the buses, but since they are prototypes, they are outside the regular timetable.

In November 2019 a fully electric autonomous Volvo bus made a demonstration run at Keoli’s bus depot outside Gothenburg. The bus drove from its parking lot to a number of different stations within the depot, such as washing, service and charging, before it parked in its parking lot – all while the bus had passengers on board. The demonstration was one of the first in the world

The Gothenburg City Card (available as a physical card or digitally in your smartphone) gives you unlimited use of trams and buses, as well as entry to museums such as the Science and Discovery Centre, Museum of World Culture and the Liseberg, Scandinavia’s biggest amusement park.

I took a city circuit using the tram and the harbour ferry (included in the pass) joining up the many big green spaces. One tram runs (half an hour) direct to the ferry to the islands. The city knows them as the two Archipelagos – the Northern and the Southern. Here the city website describes one of the quieter islands: “On Grötö in the northern archipelago there are only about 100 residents year round, which makes this the island of tranquility. There are no cars and to get to the island you go first to Björkö and then hop on the ferry from there.”

There”s more marvellous music in the Gothenburg Opera House, a striking building on the harbour-front, which opened in 1994. www.opera.se www.gso.se.

On Friday evenings many bars serve free food when you buy a drink. And in another customer-friendly gesture cafes provide a blanket on every seat outside in cold weather, to save on high energy patio heaters. Café culture is rich in this city – try Sweden’s largest (home made) cinnamon buns, kanelbullar, at Kafé Husaren. (“Fika” means having a coffee and cake – a vital pause in the Swedish day.) There’s a lot of bright dining here too. Gothenburg was named Culinary Capital of Sweden for 2012 by the rural government ministry. I enjoyed a one course lunch in a café in the fish market Feskekorka, and dinner in the stylish (bright red seats) and friendly (as most Swedish people are) Familjen Restaurant.The Familjen website speaks of a “extension of a living room…you, as a guest, are part of our family.”

Then visit the Röhsska Museum of Fashion and Design, to understand why style seems to be in the Swedish genes. This is part of the Kungsportsavenyn, known to locals as “Avenyn” (or “the Avenue”).

At one end is the city’s art museum, Goteborgs Konstmuseum (Gotaplatsen, konstmuseum.goteborg.se). As well as a good collection of Nordic art it also houses the Hasselblad Center, displaying photos, and not necessarily by that famous camera, the only one to have been left on the surface of the moon.

The corridor leading to my room in the Avalon Hotel meandered like a British country lane – no, I had not taken too much schnapps. It was lined with a border of synthetic grass. This new hotel’s designers cut down on straight lines as part of their serenity drive, in a successful bid for feng shui certification. My room had a warm and happy décor of light green, red and cream.The concept came out of a world visit the founders made in 2004 to find out the best examples of the “good” hotel, and that includes service.. Classy details included designer furniture, sleek oak walls, travertine stone floors and rain dance shower. And handmade chocolates with my cup of (apparently very efficacious) white tea.

The bathtub jutting into the room doubled as a minispa. (The more energetic can book a room with a mini gym.) This city centre hotel – Best City Building of 2008 – is close to the shops as well as the Rose Garden, in one of the best preserved 19th century parks in Europe, and the Museum of Art. www.avalonhotel.se