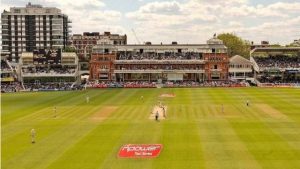 So, was Sunday’s World Cup final at Lords the greatest cricket match ever?

Some are certainly calling it that. Others stop short with “the greatest ODI final ever.” Sky commentator Ashley Giles slipped in a qualifying ” one of the”, but the Sky website (after all, they were the broadcaster) called it the greatest anyway.

Even the New York Times joined in – “Some are calling it the best cricket match ever played. ” But with the limited authority of our own Times giving insightful comment on the US World Series.

One Guardian correspondent went for “That is the most amazing game I have ever seen in my life.” Which must make him younger than 37, or else he would have some memory of the Leeds test match in 1981.

But the “best of all” claim does get solid endorsement from an outlet with real authority. Wisden online’s Phil Walker was unequivocal . “The greatest game of cricket ever played,” he wrote.

I was able to watch much of the game, and the whole of the final two hours live, on Channel 4. And I fully agree that the final stages were deliriously exciting, and the last overs as thrilling as anything you’ll see in sport (although at the very same time a tennis player was winning the longest men’s final at Wimbledon having been two championship points down – which is only happened twice before in the tournament’s history – was pretty gripping too).

But the great game of cricket is 200 years old, and we do it, and so many brilliant cricketers who have played it, a disservice if we can confine our comparisons to games in the modern age, which is increasingly coming to be defined as the 21st century.

It’s a pity if we sometimes overdo the hyperbole, because seeing the England-New Zealand game as the best one-day international ever – let’s drop that ridiculous ” of all time”, when the one-day game only came in in the 1960s – is perfectly valid. Yet even then we have the thrilling, but for the sake of this argument rather awkward, extra detail over that “Super Over” at the end. (This game was the first ODI to be decided by a Super Over.) Until 2007 the game would have been decided after 50 overs, presumably with New Zealand winning, having lost fewer wickets. I would have happily seen England win, having hit had more boundaries – which decided it in the end anyway.

With the super over played for the very first time, this game was unique in the rules. Had it applied to other games in the past, they might have been notched up the excitement scale. But we don’t know, and we can’t make a true comparison.

The problem comes when we try to compare the perfect balance of that game, scores level even after the super over, to over 100 years of test cricket – and we will have to eliminate so many thousands of 3 and 4 day first class matches to make this exercise easier.

So I throw in the three obvious candidates. The first is the 1960 “Tied Test” between Australia and the West Indies in Brisbane. That’s five days play, including, some say, cricket genius Garfield Sobers’ finest innings, the final Australian batsman run out by a direct throw on the last ball. Both teams level on the aggregate of two innings’ scores, with all wickets gone and no time remaining.

And we have 1963, but how can you persuade younger and newer followers of the game that a draw can ever be that thrilling. Yet England and the West Indies played out a drawn test match at Lords, with an ending so dramatic ( the last England batsman coming to the wicket with a broken arm) that the BBC (only one TV channel in those days) broke into the news to give live coverage. This extract is from my book Sobers six hit perfection at Swansea: That was the Day.

‘Colin Cowdrey walked out to bat with his left arm (the leading arm facing the ball) in plaster, broken by a ball from fast bowler Wes Hall, with the West Indies needing to take one wicket to win. “All through the cricket had been keen and thrilling, “ noted Wisden. Ted Dexter hit a mercurial 70 in England’s first innings. Brian Close scored 70 in the second and took blow after blow to his body from Charlie Griffith. Sobers, for once, was quiet, with scores of 42 and 8, and only one wicket. But the climax was remarkable. When the final over arrived any one of four results could have occurred – a win for England, a victory for West Indies, a tie or a draw. “When Hall began his last dramatic over eight were needed. Singles came off the second and third balls, but Shackleton was run out off the fourth. That meant Cowdrey had to come in with two balls left and six wanted.”

“Wesley [Hall] banged them both straight at the stumps,” said J.S. Barker in Summer Spectacular. “Allen stunned the fifth, got his bat somehow to the sixth – and the great match was over with Cowdrey a wryly smiling hero at the non-striker’s end.” Ian Woodlridge wrote: “The game was a palpitating draw. The best Test match I have ever seen.”

The third is the 1981 England-Australia test match at Leeds, which England considered such a lost cause that they prepared to check out of their hotel two days earlier. This is the famous Botham Test ( in truth it was the Botham series) when the swashbuckling batsman struck a brilliant century when all seemed lost.

A day later people listening to the commentary on the radio in their cars on the M1 were punching the air as Bob Willis took the final Australian wickets – and despite Botham, Australia were still favourites to win. I know, because I was one of them.

I offer these somewhat pedantic comments because I believe they are still important. Games do change, and earlier versions become less relevant when it comes to making comparisons. Rugby union is faster, the scores are higher, the players are fitter, bigger and stronger, and it’s pointless to make true comparisons with matches from 50 years ago. It’s not quite the same in football, where it’s the culture and the attitudes that have changed, rather than the way the game is played or the skill level. (But how can you compare Stanley Matthews dribbling a sodden leather ball to the dry pitch players of today?). Perhaps tennis has changed least of all, apart from players being fitter and faster.

But cricket now exists in 3 or 4 forms – 5-day test matches, 3 and 4 day two innings games, a 50 over one day game, the Twenty20 competition, and from next year the 100 ball tournament. How can you make meaningful comparisons across these different versions? We cannot, so we need that qualifying best “one day” game.

My concern is where this might lead, as we talk up the thrills of the one day game. Will younger followers, and those new to the game, even be bothered with a game possibly going to 5 days, and, horror of horrors, then ending in a draw? Less chance of that now, of course, because the game is played so much quicker. Fans expect Ben Stokes and Josh Buttler to belt the ball as furiously against Australia in the test match as in a ODI, and if the game ends after 2 days, who is worrying? We’ve beaten The Old Enemy.

We won’t have to wait long. There’s a five match test series coming up against Australia, and we’ll be able to see how a form of the game that has entranced people for well over a century can attract all those new followers who were so inspired last Sunday. And who knows, this series might even produce another candidate for the “greatest game ever”.