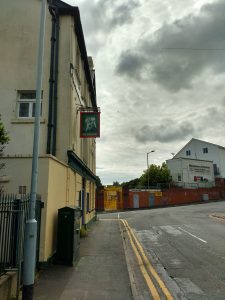 This is the second of a number of extracts I shall be publishing in August in the lead up to the 50th anniversary of the day, Saturday, August 30, when Garfield Sobers became the first player in the history of cricket to hit every ball of an over for six. It’s taken from my e-book Sobers six hit perfection at Swansea: That was the Day

The full book of that afternoon is available on Amazon.

In those long schoolboy summer holidays, then university vacations, there was always the cricket. St Helens had been a refuge since my earliest youth. Sitting in a cricket ground for seven hours, with time to read during lunch and tea (in the long form of the game that predominated then) was a rare indulgence, a prolonged escape from the “real” world.

My love for cricket came from my father, a Swansea boy. Like all true Welsh fans he would switch sports quite seamlessly with the changing seasons, from rugby in the winter (in his case, Swansea RFC) to cricket, following Glamorgan, in the summer. There was no question of preferring one sport to the other. His passion for rugby and cricket was in equal measure, and all consuming. (Unlike today, there was rarely any overlap. Rugby finished and cricket started in April; and vice versa in early September.) And so was mine.

Appropriately the BBC commentator that famous day, Wilfred Wooller, epitomised this entirely equal commitment. He was both a rugby international, and former captain of Glamorgan. Alan Rees was another who excelled in both codes, playing for Wales and Glamorgan in the 1960s. He appeared briefly as a substitute in this 1968 game. (Rees never played for England, but came on as a substitute in 1968 in the test match against Australia at Headingley and took a fine catch of the bowling of Fred . He also has the dubious accolade of being only the second player in county cricket to be given out for having “handled the ball”. The offence no longer exists. It was integrated into the Law on obstructing the field when the Laws of Cricket were rewritten in 2017.)

In cricket Swansea was the place for the remarkable.  There seemed to be “something about Swansea.” The ground is very near the sea, and the sandy, quick-drying pitch was said to respond to the incoming tide, to produce fascinating matches and some notable results. Glamorgan had beaten the Australians only three weeks earlier in that 1968 summer at this very ground, reducing them to 86 for six at the end of the first day. On another day I saw the same batsman claimed by the same bowler twice in a day of tumbling wickets.

There are many examples of big hitting at the ground. As a cricket-going schoolboy, I was lucky enough to see some of them. The elegant Pakistani Majid Khan, who rained sixes down on the members’ enclosure one quiet Thursday morning in 1967 in an innings of 147 in 89 minutes. Majid was the son of Dr. Jahangir Khan, who famously killed a sparrow in flight while bowling against MCC for Cambridge University in 1936. Majid struck 13 sixes, hitting Roger Davis, who was to “catch” Sobers in that famous over, for five sixes in one over. His cousin is Imran Khan,  former Pakistan cricketer and now politician.

I saw Australian spin bowler Tom Veivers smite six after six one August Bank Holiday evening, while his partners fell like skittles the other end, when Glamorgan beat Australia for the first time in 1964.

I remember a firestorm from Eddie Barlow – slaughtering the Glamorgan attack for 10 glorious minutes, and then out. (Or so it had seemed. To my amazement I now find he scored only 17, but it felt like a lot more at the time.)

The nonchalant hook shot over his shoulder for six by a West Indian in 1963 here remains one of the most thrilling strokes I can recall.

Then there was the regular Don Shepherd whirlwind. The big hitting tail-ender seemed to believe the bat was only invented to be swung in a big arc somewhere towards mid off. I sat through many of his exhilarating cameos.

John Arlott chose the slow bowler and end-of-innings hectic hitter in his “England XI”, made up of those who were never thus honoured. He wrote in Wisden Cricket Monthly: “The first bowling place must go to Don Shepherd of Glamorgan, who took more wickets (2218) than anyone else who never played Test cricket. Monumentally accurate, he spun the ball hard and his extra yard of pace made him highly effective on slow turning wickets too sluggish to suit the usual type of finger spinner. It is inexplicable that he was never chosen for England.” [My theory is that the selectors rarely ventured to the more distant grounds such as Swansea, preferring to base their analysis of the player on his performance when he visited Lords or the Oval, where it may have been hard for him to reproduce the bowling figures on his home ground.]

Shepherd was playing that famous day. By a coincidence the TV commentator was also in Arlott’s team.

“The side lacks a truly great batsman capable of dominating a match; so much rests upon the captain who must, surely, be Wilf Wooller. In 1948 his driving captaincy lifted Glamorgan from the ruck of the counties to the Championship; he twice performed the double [100 wickets and 1000 runs in a season] and was a superb close fieldsman.”

When Glamorgan won the County Championship in 1948 Wisden ascribed it to “his dynamic leadership, which brought the fervour of Welsh rugby to the cricket fields of England”.

Already, and at a young age, I had those memories, so it really didn’t matter what that grey August afternoon [of the Sobers’ six sixes] would produce.