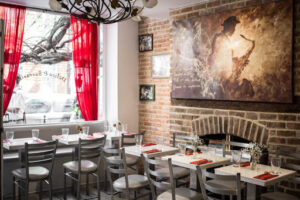 Avoiding meat and dairy is  one of the single biggest ways to reduce a person’s impact on the Earth. But if people resolve to cut down on the meat they eat, or give it up altogether, how attractive, or even palatable, are the alternatives? In one New York restaurant an inventive chef is creating a plant-based haute cuisine which she believes is so convincing, she doesn’t have to change the names on the menu.

The 368-page Net Zero Strategy outlining the official UK plans to take the country to net-zero carbon emissions left out any recommendation for individuals to cut meat consumption in order to reduce emissions.

Earlier in 2021 a government research paper had suggested people should “shift dietary habits” towards plant-based foods. But the paper was deleted soon after publication by the Department for Business (Beis).

Beis said the paper was academic research and not official policy.

“We have no plans whatsoever to dictate consumer behaviour in this way. For that reason, our Net Zero Strategy contained no such plans,” it said.

The Behavioural Insights Unit wrote the document. The unit – also known as the Nudge Unit – is a social purpose company, partly owned by the Cabinet Office, employees and Nesta, an innovation foundation – “We bring bold ideas to life to change the world for good.”

15 percent of global carbon dioxide emissions come from animal agriculture. The government’s own National Food Strategy suggests a 30 percent reduction in meat consumption by 2030 in order to hit climate targets.

We are still not doing enough to reduce meat consumption, despite urgent calls in recent scientific reports.

Britons have cut their meat consumption by 17% over the past 10 years, but they will have to do twice as much, and soon, to meet targets set out in the government-commissioned National Food Strategy earlier in 2021.

Cutting back on meat would lead to health improvements as well as the environmental benefits of sustainable food production, most notably through cuts in CO2 emissions from animal husbandry.

A seminal report in 2018 stressed the need for swift action. In the West beef consumption needed to fall by 90% and be replaced by five times more beans and pulses. Combining data from many countries to assess the impact of food production on the global environment, this was the most thorough study to date, published in the journal Nature.

But if people resolve to cut down on the meat they eat, or give it up altogether, how attractive, or even palatable, are the alternatives?

Plant-based substitutes for meat are now widely available, in supermarkets, fast food outlets and on pub menus. And committed carnivores can be reassured that the fake meat on sale does, in many cases, come close to the taste of the real thing, even if it may take some research before they find something they like.

How long, though, before convincing non-meat “meat” is commonplace in good restaurants, produced by a real chef, working on the premises?

I came across a review of a New York restaurant, where an inventive chef is creating a plant-based haute cuisine which she believes is so convincing, she doesn’t have to change the names on the menu.

Delice & Sarrasin describes itself as a 100% vegan restaurant, so there shouldn’t be any doubt that the coq in the Coq au Vin never crowed in a farmyard. There is the full disclosure description on the menu – “Chicken leg (pea protein) braised with pinot noir and herbs de provence, carrots, mushrooms, shallots and onions.”

He describes the crabcakes, made from dehydrated lemon peel, yellow bell pepper and seaweed, marinated in soy sauce, with wheatflour providing the crust, as ” beyond reproach in approximating to the ‘mouth feel’ of the real thing”. 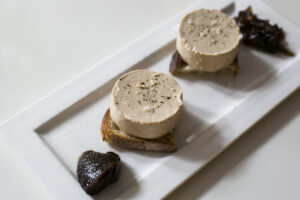 The pâté, made from tahini, cashews, garlic, onion cloves, ginger, nutmeg and cardamom, and served with home made fig jam and sourdough bread, is ” fruitier nuttier and silkier”.

For the escargot, the head chef uses, instead of real molluscs, “thinly sliced oyster mushrooms, glazed with white wine, cooked in a sauce of pulverised cashews, coconut, garlic and parsley.”

He writes that chef Caron “does not wish to alienate the omnivorous; she has tactfully sprinkled her menu with all the animalic terms – salmon, brie, duck.”

Avoiding meat and dairy is  one of the single biggest ways to reduce a person’s impact on the Earth. Meat production is a major contributor to global heating and land degradation, while eating lots of red and processed meat has been linked to a greater risk of developing cardiovascular disease, type 2 diabetes and certain types of cancer.