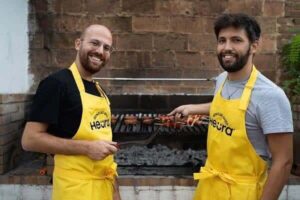 It was a potent photo opportunity, a “pork” sausage and a chorizo brought to market in a place so deeply imbued with the ritualistic killing of the alpha male of world livestock.

Heura’s co-founder and CEO Marc Coloma has an ambitious and uncomplicated vision. The company’s latest additions to a fast-growing world market in plant-based, and laboratory-produced, protein products, will help usher in a world “in which animals are with us not for us”. The tides are shifting and the plant-based protein movement are part of making animal-based meats obsolete, he said.

The launch coincided with an appeal by 50 animal protection, environmental and food justice organisations from around the globe calling on the upcoming COP26 climate change conference to publicly recognise the catastrophic impact animal agriculture has on the planet.

“If we are serious about avoiding climate catastrophe, world leaders must implement strategies to change our global food system to one that significantly reduces industrial animal agriculture,” said Julie Janovsky, vice president for farm animal welfare of Humane Society International, one of the signatories.

The animal agriculture industry contributes an estimated 14.5% – 16.5% of global greenhouse gas emissions, about the same as the emissions from the transport sector. Around 88 billion animals are raised and slaughtered for food each year. As well as addressing a major component of greenhouse gas emissions, the shift to alternative protein sources, by reducing livestock numbers, could free up land for crop production, cut soil erosion, and relieve pressure on under pressure water supplies. And address, and in time potentially eliminate, all the associated welfare issues.

Heura is one of a number of companies making still small yet meaningful inroads into this huge global market, and changing the public’s perception of meat.

Set up by two food activists – the other is Bernat Añaños –  in 2017, Heura was already one of the two most popular plant-based meat brands in Europe. It recently launched its products in the UK. (The UK is an important plant-based meat market, expected to reach £1.1 billion by 2023 – Mintel figures.) The company’s range includes 100% vegetable Mediterranean Chicken Bites and the Original Burger.

Heura says its plant-based “chicken” contains the same amount of protein as traditional chicken, with only a third of the fat. Ingredients include soy and spices. But the key component is olive oil. The company has developed a way to make olive oil into a solid, and so improve the nutritional value of its products. It claims 85% less saturated fat than competitors. And it uses many fewer ingredients. Its burger, for example, has 12 ingredients, while some competitors contain more than 20.

Reducing meat and dairy production and consumption is one of the most effective measures we can take to avoid catastrophic climate change, according to scientists reporting to the UN’s Intergovernmental Panel on Climate Change. Yet at the moment, meat is still supreme. Some 30% of the calories consumed by humans come from, mainly, beef, chicken, and pork. Americans consumed 225 pounds of red meat and poultry per capita in 2020 — up from 167 pounds in 1960. Analysts estimates a market worth $2.7T by 2040.

Yet it is not hard to see an alternative world in which this distinctively 21st first century product commands as much space on the supermarket shelves as our most traditional red meat form of protein, with or without incentives and promotion from governments.

Indeed it has already broken the credibility barrier. Around 16% of supermarket ready meals are now plant-based. Investment has been pouring into companies such as Beyond Meat – which manufactures the plant-based Beyond Burger – and Impossible Foods. Alternative “meat” companies are supplying the big high-street fast food operations, including McDonald’s and Burger King.

Impossible Foods’ founder and CEO Pat Brown has high hopes. “… I think plant-based products are going to completely replace the animal-based products in the food world within the next 15 years,” he said in a 2020 interview. “That’s our mission. That transformation is inevitable.” 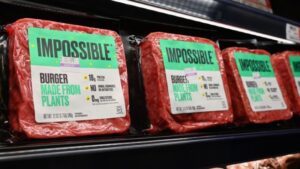 New meat-free kid on the shelves

UK supermarkets now stock a wide range range of meat alternatives, from fake turkey to vegetarian “ham”. There are vegan pork scratchings, made from flash-fried soya pieces, and the well-publicised Greggs vegan sausage roll, which it followed with the vegan Steak Bake.

Moving Mountains’ B12 burger was a hit. The company launched in 2015,  and started selling the burger in a vegetarian and vegan restaurant in East London. Later all of Marston’s 400-plus food pubs began offering it. More pub chains have since put it on their menu.

Companies behind the new products are, however, make it plain that they want to reach well beyond the small, but growing, vegan market. They see a big potential take-up of synthetic burgers by “flexitarians” – meat-reducers – and are using beetroot and other plant substances to make burgers “ooze” and “bleed” just like the conventional thing.

Simplicity Burger is one company determined to create a burger “that anyone and everyone would find delicious”, and with both the flavour and the texture that the true red meat eater would recognise.

That is another non-meat development not far down the culinary road that is likely, in time, to far out-strip the plant-based sector. The production of cultured meat, grown in labs from animal cells, is being taken in up in a number of countries. It’s been a slow, and hugely expensive start, when you look at the price of the first cultured meat burgers, but the pioneer producers have hopes to build factories producing tonnes of cells within a few years.

Cultured meat would then be an alternative for everyone, whether they intend to reduce their meat intake or not, or care about the climate consequences. It would in effect be meat: nothing would have to be done to flavour it to make it taste of meat, because the cells on which it is based would be derived from animals. Advocates see the market for cell-based meat,

Not too far into this century, will the real red meat restaurant become as is rare as the petrol and diesel filling station? Will the big meat producers, whether they care or not about the environment, see the enormous savings to be made from cell-based production as opposed to rearing cattle in fields and sheds?