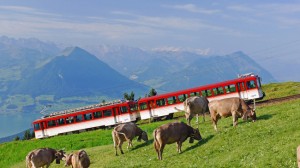 Do you feel inclined to walk? Steep times on the Rigi

In a gloomy recess in Ingenbohl Forest above Lake Uri, a buttercup yellow arrow beamed cheerfully out of a monochrome background. “Trust me,” it seemed to say. “I’m a Swiss signpost.”

Think of a cartographical St Bernard, proffering reassurance, guidance and, if not exactly a drink, then the promise of one. There was more helpful information.A strapline under the arrow told me the next village was 80 minutes away, at walking pace. A symbol promised, unequivocally, “Inn”.

Subsequent yellow arrows widened the options. If I turned left here, in 45 minutes I would reach a bus stop; a branch to the right and I would arrive at the jetty for the lake steamer in 30 minutes. In this land, the signpost is king. Just another strand in Switzerland’s admirably integrated transport system.

They do distance, too. Switching into medieval pilgrim mode, I might up strike off across country. One sign offered destinations that would keep me walking well into next week: the Passo de Bernina in 69 hours; Compocologno, away on the Italian border, 78 hours.

Today’s target, though, was much closer. And it came with an intriguingly Shakespearean note. Fluelen is a small town at the top of Lake Uri. The first yellow sign I found on the edge of Brunnen, where I spent the night, suggested three hours, 50 minutes of walking. I did it in six hours, but with frequent stops at belvederes, century-old terraces from where I could look down through the trees and see eagles corkscrewing over the lake.

There had been musical interludes. Swiss valleys really do conform to their aural stereotype. The sound of cowbells is to the Alpine meadow what Muzak is to the hotel lift. The alert cowman knows where his beasts are without even looking. A regular chime in A-natural means a cow easefully grazing; a feverish andantino indicates the beast is scratching its back, while a cow scratching another’s back is delivered to the rhythm of an urban rap. And a dull clunk, clunk? That’s several recumbent cows struggling to their knees.

I reach Fluelen. I could use my Swiss Pass (free passage on all publicly owned transport systems) back to Brunnen by steamer, bus or train. (There is also a bike route.) I opt for the northbound Chiasso to Basle express and retrace a full day’s walking in 15 minutes.

The next day I am introduced to the Swiss naval tradition. It’s an hour on the paddle steamer Stadt Luzern to Vitznau on the interlocking quartet of lakes that the Swiss call the Vierwaldstattersee and which we know as Lake Lucerne (Luzern in German). Stadt Luzern announced her arrival with an imperious boom, the captain tall and patrician on the bridge at a brass speaking tube. From the stern trailed a Swiss flag so vast it did not so much flap as elegantly undulate. We glided majestically into the quayside at Vitznau and an officer adroitly lassoed a bollard with the hawser to tie us up.

Like Queen Victoria and Mark Twain, I was here to ascend Mount Rigi. They carry the queen. Twain walked. Intending to greet the dawn over the Alps, he took two days and wrote about the experience, hilariously, in A Tramp Abroad. I took the train which meets the boat and, in turn, links up with a veritable spider’s web of footpaths.

Swiss mountain railways, smart, well funded and mostly privately run, are the equivalent of our long-lost country rail system, but on an incline. The Rigi Railway is both tourist attraction and social service. My train carried Japanese tourists on the inside and milk churns (to the vehicle-free communities up on Rigi) on the outside.

At every station a post garlanded with yellow signs fires off walking opportunities to all points of the mountain. The train, a grumble of cog-wheels, took 35 minutes to the top. The final stage to the summit at 1,800 metres was up a slope aglow with mountain primroses.

Like Twain, I peered over Rigi’s southern precipice. A mile down, commercial Switzerland bustled on; main roads and railways tangled and unravelled across a fertile plain. For Twain it was “like inspecting the world on the wing”. I decided to walk one of the summit circuits, but as I set off malevolent blue-grey vapours were beginning to obscure the sun. It was already raining in Lucerne, 20 miles away. The thunder cloud boiled up. With no wind, it had the entire compass to choose from. It chose Rigi. An ominous grey curtain advancing across Lake Lucerne allowed me to plot the exact path of the storm. I had ample time to shelter under a rocky overhang, where I could casually regard unquantifiable billions of raindrops hurtling past, still with 3,000 feet to go.

Five minutes later, this small meteorological event was all over. Now I could see the entire left half of the panorama, composed of wave after wave of snow-capped mountains, rolling away to Mount Titlis and the Gotthard. They remained bathed in sun the entire afternoon.

I was heading back towards the path down to Vitznau when, at 4pm sharp, an unexpected notice stopped me in my tracks. “Twinnings (sic) tea – 30 varieties.” I climbed the path in happy anticipation of a steaming cup of Prinz (sic) of Wales. Not today. The tea room was boarded up. I was a month early. They have been serving mountain visitors here for well over 100 years and they know exactly how much business they can afford to ignore on a wet Wednesday afternoon in early June.

I spent the night in luxury in the Park Hotel Vitznau – the setting for the film of Anita Brookner’s novel Hotel du Lac . It was built in the Belle Epoque style in 1902, so Queen Victoria just missed it. She would surely have found it to her taste – as indeed would Twain after his adventures on the Rigi.

I followed yellow wanderweg or sentier paths with no climbing involved. Stout boots and waterproof clothing (spring and summer rains are frequent and heavy) were sufficient.

The Swiss Pass gives unrestricted travel on lake steamers, railways (but not all privately owned mountain trains) and public transport.