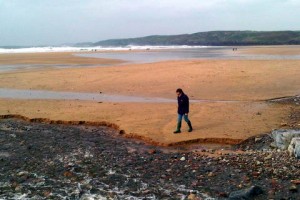 There is a so much menace in Harry Potter films these days (“Nowhere is safe”  is the slogan on the poster for the final film Harry Potter and the Deathly Hallows, depicting our anxious hero superimposed against the London Eye). So it’s a great relief to see them arrive at a location in the film that is genuinely without threat; where the characters, at least for a while, seem to be safe.

There’s a great,wide welcoming beach in the new movie, and Harry and his chums are there  to stay at  the safe address Shell cottage, home of the newlyweds Bill Weasley and Fleur Delacour. Ron, Harry, Hermione Luna Lovegood, Dean Thomas, Mr. Ollivander, and Griphook all end up there.

And where is this serene and carefree strand?  You have to go with the utter end of the M4 in West Wales, and then about 40 miles further on to reach reach Freshwater West, already well-known to surfers. (In the book JK Rowling sets the cottage in Cornwall, but that was rather a long way for the film makers. The West Country County’s loss is Wales’ gain.

The two mile wide beach is swept of huge, tumbling breakers, divided by streams running off  the Pembrokeshire heights. Go there outside the summer peak, and you  could well have the place to yourself, apart from some distant figures in wetsuits rising on the crest of a wave and disappearing into the crashing foam.

For days on end in 2009 it was the centre of Hollywood’s focus, full of camera crews, urgent directors and the famous young stars standing around, watch by  paparazzi and interested spectators. They built Shell cottage –“it stood alone on a cliff overlooking the sea, its walls embedded with shells and whitewashed..”, wrote JK. They put it just inside the dunes, and it stood there bizarre and incongruous, in temporary contravention of the Pembrokeshire National Park planning rules.

We were there in October, 2010. We walked the huge empty strand in the creamy autumn sunlight, as the waves swept in trailing plumes of spray, and a lonely peregrine hunted over the rocks. There is nothing to show now that the Harry, Ron and Hermione characters, or the cottage, were ever here. But the “constant ebb and flow of the sea, like the breathing of some great, slumbering creature”, that Harry could hear, remains.

And perhaps you’ve seen the beach somewhere else, too. Freshwater’s other Hollywood starring cameo was as a setting for a battle in the Ridley Scott film Robin Hood.