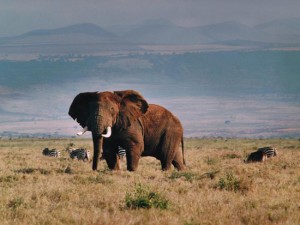 Standing proud in the shadow of Mt Kenya

Munghai, our driver, was never wrong. Not once did he mis-identify a bird, out of a possible 800 species. In pure numbers the rainforest may have avian superiority, but East Africa’s ornithology is far more accessible and conspicuous. It is a wonder of the world. He would stop the landcruiser and hand us the book so we  could see for ourselves his infallible selection from page  after page of sunbirds, weavers, bustards, longclaws and  babblers. Then he would reverently repeat the name, as if  savouring a linguistic delicacy. “Rufous-naped lark.  Emerald-spotted wood dove.” No nuance of colour or feather escaped him. “No, not the  fiscal shrike,” he politely corrected us. “The taita fiscal.”

So when Munghai pronounced on the grey bulk slumped under an acacia half a mile away on the horizon –  to our untutored eyes no more than a boulder – he was  presenting not a hunch but a triumphant certainty: Lewa Downs’ greatest prize.

(Now, of course, it has another famous association – as the place in Kenya where Prince William can seek secluded repose, and where he is believed to have proposed to Kate Middleton, in November 2010,)

Munghai started the engine and we set off uphill,   pitching and jolting at less than walking pace on a track  scoured to the rock by the rain, diverting around a  roadblock of recently elephant-amputated branches. Then we  reached the place.

There before us was the tragic, prehistoric sensation of  Africa. Not one, but five drowsy white rhinos, squeezed  into every spare square inch of shade. As if the sun were  their only problem. To   the poacher their horns represent the most valuable animal product on earth. 300,000 dollars, cushioned on the red earth before us.

If the white rhino is almost suicidally submissive, the  black is three tonnes of blundering edginess, ran indiscriminate menace to friend and poacher alike. Next morning we watched in awestruck silence from 200 metres as one strained beyond its fog of short sightedness to pick up the rumour of intrusion from our direction.

Only last week a black rhino had despatched a fleeing squad of visiting British soldiers into the safety of a tree – I’ll spare their blushes by not naming the regiment – then chased their camels for two miles.  Pliny’s “Always something new out of Africa” originally meant the shock of the rhino itself. Today it might more appropriately describe the ploys for keeping the continent’s mega-fauna from the poacher.

While elsewhere on the continent the last few hundred rhinos blunder myopically towards extinction, on this  private conservancy, more than half the size of the Isle of Wight, they are Fort Knox-secure inside a 110 kilometre long solar-powered electric fence, patrolled by over a hundred armed guards.   We often saw the proud men from the local tribes in green uniform, on their solitary beat. If the guards were stood down, and the fence de-activated, the rhinos would be dead within days. Conservation at Lewa Downs is not for the half, or the faint-hearted.

15 miles north of the Equator, 5500 feet up on the northern foothills of snow-capped Mount Kenya, Lewa Downs  is 55,000 acres of majestic, long African views scattered with acacias and rugged prominences, riddled steep valleys, swamps and rivers. This land was first farmed in the 1920s by the Craig family, who even then had a conservationist vision. The second generation  Craigs initiated the switch from cattle to wildlife, which was allowed to find its way back into their benign estate.

The third generation of Craigs, William and Emma,   working with a trust which now administers Lewa as a  nature conservancy, is completing the transition to a  final balance of 85 per cent game to 15 per cent cattle.

During our visit black and white rhinos numbers were equal after some recent births, 44 in total. Lewa’s other  specialities are some of Africa’s biggest herds of  reticulated giraffe and Grevy’s zebra. It recently   re-introduced the rare sitatunga. Otherwise it admits  anything that wants to enter, through a 30 metres gap in  the fence. Animals are equally free to leave (Lewa is not a zoo) – all except the rhino, which, short-legged, cannot step over a low wall in the fence gap.

Lewa is as persuasive proof as you will find anywhere in Africa of the new and optimistic  proposition that wildlife is worth more alive than dead, that an entire local economy can be sustained by eco-tourism. Several hundred local people now work there.

The Craigs treat the safari experience as if it were a limited-edition print. In many of the East African national parks congestion is becoming a serious problem.  Visitors may have to join a scrum of as many as 30 vehicles to view a pride of lions. Here only 60 tourists are admitted at any one time, accommodated thinly around the conservancy.

No amount of familiarisation by the BBC’s wildlife output could prepare us for the elemental thrill of our first game drive. Here was nature in primeval abundance, spaced out as if by some invisible demarcation.  Safari novices relate with pride how they bagged “the big five” – lion, giraffe, elephant, buffalo and rhino.

The convention that the animals of Africa should be prioritised by size or ferocity made no sense to my family. A party of warthogs, tails erect like car radio aerials, provoked the same whoop of ecstasy from the back seat as the impala; a silver sided jackel, trotting urgently to its next appointment, was the equal of our first monkey sighting.

To adult eyes that had previously seen just one eagle, briefly, distantly, over Western Scotland, here was an  entire double layer chocolate box of them, with the bateleur – broad white breast –  demanding to be picked first. We had never seen a goshawk. Lewa has four species.  Our very first was a passage of epic poetry on wings, the pale-chanting goshawk.

A single tree illustrated the fabulous carrying capacity of the African eco-system. In one small acacia the only two perching places were taken by the assassin and the harlequin. The continent’s smallest bird of prey, the pygmy falcon, sat alongside the scarlet breasted roller, sumptuously quartered in red and green and blue and lilac.

For one memorable afternoon walk we were led out by a immaculate young Masai, hair braided, dressed in a shift of startling scarlet and carrying a spear. Not some tourist gimmick, but a trainee guide on work experience.

Lewa wants to replicate its model of eco-tourism in the Masai’s own reserves nearby. If the tribes can make an income from the wildlife around them, they, better than anyone, will be able to conserve it. There is hope for Africa’s wildlife.