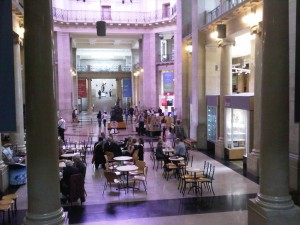 I called in at the new National Museum of Art in Cardiff this week and wondered how it might connect with the world outside, or if it was just a Welsh metropolitan vanity project After all, who builds six new galleries in these straitened times, then opens them up to the public for nothing?

My answer came three days later with the death of Lucian Freud, by common consent  Britain’s greatest living artist. There was a Freud hanging in one of the new galleries, a jaunty and affectionate portrait of Sir Cedric Morris (1889-1982). I assume he did it sometime in the 60s or 70s. To my shame, I didn’t pay it much attention.

I now know the subject was one of Lucian Freud’s earliest teachers, when the artist attended the newly opened East Anglian School of Painting and Drawing. which Morris set up.

So in a single work this new gallery connects to the formative years of one of the great figures of contemporary painting, at the same time casting light on one of the overlooked figures in Wales’s wide cultural community.

The pedigree of the world-class, if cramped, art collection in the existing gallery within the National Museum of Wales was widely acknowledged. Its reputation was founded on the works gathered by two formidable, if unlikely, collectors: spinster coal-fortune heiresses Gwendoline and Margaret Davies. But it lacked space.

The addition of six roomy galleries in the new West Wing at the National Museum puts that right. The National Museum of Art, fitted out at a  cost of £6.5m, can now display for the first time the full range of  Wales’s impressive art collection – a mix of fine and applied art, from the historic to the contemporary – under one roof.

It was in one of the new galleries where I spotted the Lucian Freud, a truly great figure celebrating an unsung Welshman’s part in his artistic education, alongside  works by artists associated with Wales such as Josef Herman and Shani Rhys James and leading British and international artists including David Hockney and Rachel Whiteread.

The new Museum of Art, which opened earlier this month (July, 2011), gives us fresh cause, and the curators more space, to celebrate the amazing Davies sisters. It’s a remarkable story of a quest for fine things. In 1908 two young unmarried sisters, Gwendoline and Margaret Davies, stepped out of a severely buttoned-up  background of mid-Wales. They were strictly religious, teetotal and quite unversed in art.  But they were also heiresses to one of the world’s great industrialists, David Davies, Wales’s King of Coal.

As Britain’s richest spinsters, each of them sat on a fortune worth around £35m at today’s values. Wealth and a commitment to fine art led them across Europe in the early 1900s, at a time when it was still possible to purchase great art outside the auction room. They became two of the world’s greatest collectors of art.

For the next 15 years they toured Europe buying up some of the finest works from a prodigious crop of contemporary painters, including Renoir’s La Parisienne, Monet’s Rouen Cathedral and Water Lilies, and his Venetian View of San Giorgio Maggiore at evening. They bought Turner, Corot, and Van Gogh, creating the biggest collection of French Impressionist paintings outside Paris. When they left their collection to the National Museum of Wales in Cardiff, they created what one writer described as “possibly the most ravishing display in Britain”.

My personal favorite among their acquisitions – it has always hung in the museum – is  Vincent van Gogh’s Rain, Auvers. It’s one of his most lachrymose work, black raindrops lancing in diagonal spears across a gloomy valley, almost scratched onto the canvas. Within weeks he killed himself.

Then there is Renoir’s coquettish Lady in in Blue. Brian Sewell wrote in the London Evening Standard (January 2007):  “The beautiful La Parisienne. a painting from [Renoir’s] early maturity, dates from 1874, the very year of Impressionism’s birth, in which Impressionist handling of paint is almost fully-fledged, fluid and fluent…”

The museum says the extension to the gallery – the Welsh Government invested £3 million, with the balance coming from  various trusts and  foundations – “allows for more elbow room.” Pieces that have long languished in storerooms have been hauled out and paintings and sculptures that were jammed together have been given more space.

I hope the extension and  new focus it brings to this remarkable collection will bring Cardiff the artistic street cred it deserves, among visitors outside Wales and in the capital itself. The Guardian reported an astonished local asking if the eight works by Monet were originals. “”Do we really have real Monets in Cardiff or are they copies?” “I had to convince him they were real,” said Mike Tooby,  director of learning, programmes and presentations. “People need to be reminded that they don’t have to go a long way away for great experiences.”