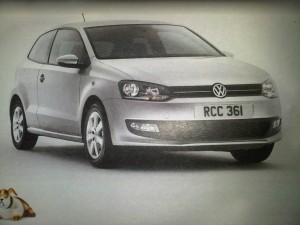 Another stark warning this week that we may have reached, or will shortly reach, Peak Oil. Click here. Simply put, this is the moment when the world produces as much oil as it can, because  there will never be as much again. From now on, or so the experts say,  less and less will flow out of the oil wells,  just when the world wants more of it. You do not need a Ph.D. in energy to work  the consequences of that out.

To reduce the impact  on the developing, and the already developed, world we need some big decisions, and fast.   Pause for ironic guffaws. So what about lots of little improvements instead?

Musing on this over my  coffee this morning, I found two straight away, in this week’s Mail on Sunday Live magazine. On the back cover there’s an advert  for the new Polo Match. Although the  copywriter was much is more interested in the accessories – 15 inch alloy wheels, air conditioning, iPod connection and sleek front fog lights – the  key data is in those boring service notes at the bottom,  where readers over a certain age need  reading glasses.

The car comes in different versions, but  the top one does 67.3 mpg in the urban cycle,and  an astonishing 91.1 in the extra urban (so if you drove  within the speed limit on  an uncongested M1, you could potentially go from London to Leeds on 2 gallons). The combined figure is 80.7 mpg, returning on emissions figure of 91 grammes of Co2 per kilometre (g/km).

So if  you are been driving a standard family car,  probably doing less than 40 miles a gallon,  you could cut your  petrol  consumption in half at a stroke. And that’s still not important enough to put in the main advertising blurb.

Looking inside I found  the  car column by James Martin , who is usually pretty scornful about soppy environmentalists. He was  reviewing the Vauxhall Corsa 1.3DTi EcoFLEX Exclusiv – yes, that’s really its name.

Mentioning the car for the first time in paragraph seven, after some sideswipes against  vegans and people who protect newts, he notes that the original   car seems to have been around forever – since about 1983. He finds  the new version a “smiling” car, with several nice touches and concludes that  it’s a car “to brighten up tough times.”

This fully paid-up petrol head lists the features – a touchscreen sat nav, adaptive front lighting, different coloured seat trims, and an ultrasafe chassis and steering. Then, a paragraph and a half from the end he unearths the selling point, which I would put  at the start of the story. “It’s clean enough to be road tax exempt, and claims to return 80 miles a gallon.

“Amazing if true,” he concludes, although he couldn’t achieve that figure. The  accompanying Tech Spec  actually gives a fuel consumption of 78.5 mpg and   CO2 emissions of 95 g per kilometre, making it congestion charge exempt (the  figure is 100 g per kilometre). And it costs £15,330

Here then, two cars for the range-anxious, who anyway wouldn’t want to spend another £10,000 on an electric car (EV). Conventional vehicles, neat and tidy, with features enough to satisfy the average driver, but both  halving the average driver’s take from those lower- flowing oil wells.