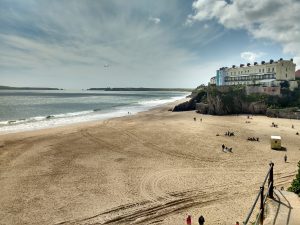 It’s a long way from London to Pembrokeshire, so if you didn’t have too much to carry, you might fancy a nice through train from Paddington to, say, Tenby, famous old resort.

And until 2019 you could do just that. Four and a half hours of Co2-busting ease, bypassing the holiday jams.

But not any more.

Pembrokeshire has long been a desirable, and now world renowned holiday destination. National Geographic included the Coast Path on its list of “100 Places That Will Change Your Life”. In the busy summer of 2021 you will be be hard put to find a place to stay there, even on a camp site.

But in the very year when the county is likely to break visitor number records, it has, perversely, become that little bit harder to reach. For the first time in many years there is no direct train to Pembrokeshire from London.

The GWR (Great Western Railway) launched the Tenby Express, one of its grandest summer Saturday departures from Paddington, in 1896. It evolved into the Pembroke Coast Express, and, apart for wartime gaps, has run, more or less, with or without the name, in holiday high season ever since. Until now.

The holiday service, using smart new units based on the Japanese Bullet Train, was understandably discontinued in 2020, along with many trains. But it was not restored for 2021.

So why does this matter when, let’s face it, most people travel by car to their holiday stay in the UK? And will to continue to do so, however daunting the jams – and on the road to Pembrokeshire the M4 around Newport, and the A40 just before Carmarthen, are notorious summer weekend pinch points. 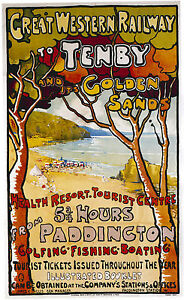 But in the year of COP26, we the travelling public, politicians and the railway companies don’t have the option of shrugging our shoulders and accepting that rail can never compete, still less that train companies should actually be cutting their services. Rail is no longer a “nice to have as backup, just in case” option.

Surely if you are trying to tempt people out of their cars and onto the railways, offering them a direct, fast service using the latest trains, the sort of attractive link you could put on a poster or a TV advert would be the way to do it.

Instead the passenger is advised to leave the London train at Newport and take a stopping diesel service the rest of the way.

The GWR will correctly argue that another company’s trains still run into Pembrokeshire, and by making a change or two, you will get there just the same. But having to leave the swift London train at Newport and take an all-stations diesel service the rest of the way is more deterrent than alternative.

It might also point out that an earlier Paddington train goes all the way to Carmarthen, although passenger still have to change there. But we are not comparing like with like. The mid-morning train, convenient for many all over the Southeast, no longer exists, after 120 years.

This is an unfortunate time at which to reduce a train service in Wales. Earlier this summer the Welsh government (which has nothing to do with GWR) created a new cabinet role of minister for climate change. First Minister Mark Drakeford: “The environment will be at the heart of our decision-making.”

And this week (June 2021) Drakeford’s regime paused all outstanding road schemes in Wales, pending a review. The government in Cardiff had already scrapped a controversial M4 bypass at Newport, scene of many jams, in favour of traffic management schemes and public transport improvements.

However even those few people who might have been pondering the railway alternative, faced with the lack of a through train, may decide that it’s just easier to drive, despite the prospect of summer queues on the M4, and despite the extra carbon hit (68% CO2 emission saving, by train – based on 2 persons in a train, compared to a car.) And the car journey would be cheaper, anyway.

Can we expect that, when it’s established, this “integrated railway” will include Pembrokeshire as a principal destination –currently it doesn’t even feature in the GWR website, which bizarrely stops at Carmarthenshire. It’s good that this often-overlooked county is promoted, but perverse that Pembrokeshire, whose praises the original GWR sang in many posters, is left out.