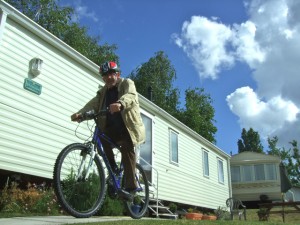 Wanted. Somewhere to take 11 family members and friends, aged 12 to 90, for a big birthday celebration. It had to be in the South of England, and in the country. We didn’t want to pay hotel prices. And we needed self catering. Oh, and entertainment and activity to suite three generations. And it was February, so it would probably be snowing.

Fast forward two months to earlier last year, and an all-action Sunday evening of family fun at Longleat Forest Center Parcs, in Wiltshire. It was the end of our three night stay. This is when most people curl up in front of the TV at home, but we were still going strong.
First a riotous session of 10 pin bowling. Then on to the indoor “subtropical swimming paradise” (with river rapids) for a last dip (some of us were mere bystanders by now) to complete a full and busy break. It was indeed snowing, but nothing the miniature road train that took us all over the big site couldn’t cope with. As we relaxed over late-night drinks in our cosy villa, we agreed it had been as good as a family weekend away gets.
Center Parcs was as close a fit for our exacting demands as we could have imagined. We filled two villas. We hired bikes, and a mobility scooter for our senior citizen.
Our party spread out over the 400 acre forest site, sampling the many activities. We tried abseiling, boating, “tree trekking and zip wire”, falconry and the spa. Some simply cycled.  Cars have to be left in car parks near the entrance, so internal roads were quiet and safe.
I took it easy, admiring the hundred-year-old giant redwoods and counting the abundant wild birds at the feeding station. And watching a rugby international in one of the big bars with a lively crowd. Yet we weren’t “prisoners”. On Sunday lunchtime we left the site for the big birthday meal in the nearby Bath Arms at Horningsham.
I’ve stayed in many excellent hotels, but a good and rewarding break is about more than the quality of room service, or the thickness of the carpet in the lobby. I would never be snooty about holiday parks, and I have sampled a few.
Older readers should forget the humble tin box you may have stayed in on original caravan sites. Todays’s holiday parks offer accommodation ranging from mobile homes fitted out like sumptuous boudoirs on wheels, through to Center Parcs’ treehouses, complete with hot tub and iPod docking station.
The parks’ cons are as mod as you like – with lots of restaurants, pubs and supermarkets. I can still smell the seductive aromas of croissant and baguette from  the resident French bakery on Haven Holidays’ Devon Cliffs park.
And although many parks buzz with night life, the “Cinderella Rule” kicks in by midnight or so and a universally observed peace descends. On some sites I’ve slept in the sort of deep and ancient silence that’s lacking in some of the best hotels.
The quality of holiday parks, their attractions, their settings, and eco-commitment has been transformed over the past 15 years or so.
Butlins, the 75 year old byword for the inexpensive family holiday has had one of the most impressive makeovers. They still have the Red Coats, but the knobbly knee competition and beauty contests have moved over for sandcastle master classes and street dance sessions  – washed down with a gourmet Fairtrade coffee.
Faced with competiton from foreign holidays, Butlins draw back to just three inclusive resorts, Minehead, Bognor Regis and Skegness, It upgraded all its accommodation and restaurants, and adding new facilities, including hotels – its new  Ocean Hotel at Bognor Regis features disco lifts, and singing showers – as well as waterparks, showbars and nightclubs .
Butlins is also championing British beaches, after the shores of its three resorts received a record number of Blue Flags from the Marine Conservation Society in 2011.
I have fond memories of Park Resorts’ Romney Sands holiday park in Kent. There’s a station for the Romney, Hythe and Dymchurch Railway at the entrance. Pint-size locos, their whistles giving it the full Rocky Mountain yowl, rattle off to the mysterious outer reaches of Dungeness.
And I’m impressed with the strong green thread running through Haven’s sites. At their Rockley Park resort, near Poole, they created a pocket nature reserve which is home to all of Britain’s half-dozen reptiles.
Among the smaller, top-end sites, I’m smitten with Celtic Haven, near Tenby, in West Wales. This huddle of 26 white-painted houses close to the cliff tops looks across to Caldy Island. They’ve squeezed a spa and swimming pool into this complex of former estate cottages and farm buildings. There’s even a terrace for sunset cocktails, next to the restaurant, Waves. They source meat and vegetables from the fields around, and buy fish fresh off local boats.

From our breakfast table in Cranberry Cottage we watched the breakers crashing onto the rocks, just days after this magnificent stretch was named the world’s second best coastline.