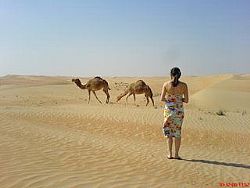 View from the boundary - a desert day trip from Abu Dhabi city.

I was there recently.  The place of the gazelle is less frantic than Dubai, its near nighbour in the  United Arab Emirates in the Gulf.

As well as a peaceful place to play big sporting events, the biggest of the emirates is now a destination on its own. This is a suggested list of things to do – apart from watching cricket –  in this friendly city less than 50 years old, and in the 100 miles of day-tripping desert beyond that make up this emirate.

Walking around the $3 billion Emirates Palace hotel, inspired by an `Arabian Nights’ Palace, I mistakenly read that guests are ferried around in gold buggies. Should have been `golf buggies’, but the first version made perfect sense. If there was an inch of the vast foyer left unpaved in mosaic or shining marble, or a corner of its monumental dome not glimmering with real gold, I didn’t spot it. The government built a contender for the world’s most expensive hotel but managed to not quite decend into architectural schmaltz, green-wrapping it with a ring of 8000 trees half a mile wide. Room prices are somewhere in outer space. But you wouldn’t want to waste a moment by sleeping.

Abu is one of the most user-friendly of cities. There is next to no public transport. That may be ecologically unsound, but the taxis are so cheap I kept looking at the meter in disbelief, expecting the real price to show up. We were at the Abu Dhabi Mall, then wanted to compare the shops in the bigger and newer Marina Mall two miles away. The taxi cost about £1. We headed to the souk (Hamdan Center) to pick up some designer sunglass. That’s another £1 fare. Out at night to a posh restaurant? A fleet of smarter limousine taxis stands by, charging twice the price, but who’s arguing? Want a day out in Dubai, 80 miles away? Say £50 by taxi – so don’t even think of hiring a car. Since my visit, a new taxi system has comes in, which may mean higher prices.

An hour and a bit from this city of wealth and high-rise ambition we peered over the razor-sharp crest of a 100 feet-high sand dune, fresh-minted by the wind that morning. Our driver Ibrahim coaxed the 4 by 4 up there to prove that such a view still existed, a pristine golden world stretching to all horizons, empty apart from the odd oil well and power pylon. Calculating complicated safety theorems in his head, Ibrahim then let the vehicle, my whole family aboard, drift in neutral down the near sheer incline. Thrills over, we crept up on a lonely camel train. In the distance a trio of gazelle sprinted away. Back on the road, we ended up at the Liwa Oasis, on the edge of the Empty Quarter where Wilfred Thesiger made his epic crossing in the 1930s.

There is fine food in hotels throughout the city. It’s normal to eat in hotel restaurants as a non-resident, because they have the alcohol licences. But for a meal as authentic as the red and white-squared dish dash (at perhaps a tenth the price of hotels) call a cab to Maroosh. This is local fast-food, slowed right down at your table. The starters of olives, chillies, garlic paste, mint and hummus with oven-hot flat bread, was a meal in itself. But they would insist on serving more. Plates of chicken and lamb shawarma (wraps), falafel and tabouleh (parsley and cracked wheat salad) arrived. Along with mango, guava and pineapple juice.  Real food at its finest. The bill for four was £10. I think that extra bottled water at 4p did the damage.

Cars of the world

The car was Sheikh Hamdan’s world, and indirectly, as gas guzzler, the source of his family’s riches. So why shouldn’t he make a vehicle the shape (no, not quite the size) of the planet the opening feature of his car museum, in a pyramid-shaped building in the desert just south of Abu? If that monster doesn’t impress Clarkson, the creation inside surely will. It’s a whole house, complete with bedroom, corridor and dining room on elephant-high wheels. They actually drove it, but just the once. The rest of the display is made up of pristine polished marques of the world – New York taxi, original VW Beetles and a gorgeous black Buick from an earlier age of restrained, contoured elegance. And some of the Rainbow sheikh’s customized fleet of Mercs, each a different colour of the rainbow.

With gridlock beginning to grip in Abu, the tourist people devised the perfect city sightseeing solution, a ten minute buzz through the clear (most days) night sky from Port Zayed. You see a lot at a lazy 75 mph. Star lit-up features include the flag, as big as a bus, on a 360 feet pole on the Corniche walkway alongside the Emirates Palace. Abu’s skyscrapers may not match Dubai’s for might and height, but with each one lit in its personal colours, they are a vibrant night spectacle against the black desert beyond. If the moon is up, look for the string of islands out in the Gulf. And, out east, the world’s second biggest mosque – it can accommodate 40,000 people.

City of the future.

Work started on Masdar, promoted as “the world’s first zero-carbon city”, on the edge of Abu Dhabi city, in 2006. The government-backed project to build a car-free city for 40,000 people, designed to rely on renewable energy, is well underway, and it is possbile to visit. The city combines 21st Century engineering with traditional desert architecture. The biggest solar farm in the Middle East is being built to power Masdar. Drivers leave conventional cars at the city gates and then either walk or take the (Personal Rapid Transit) podcars, driverless vehicles guided by magnetic sensors, powered by solar electricity and programmed to go where you ask.

Masdar City is open to the public Sundays to Thursdays, 8:30am to 4:30 pm. Park at the K13 Parking area next to the PRT (Personal Rapid Transport) station where you are free to explore the premises at your own pace.