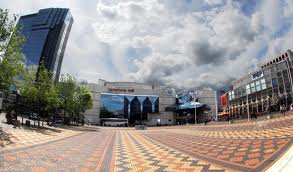 I cannot fathom why Birmingham is routinely mocked, if only in fun. The city centre is grandly impressive, with powerful, restored old buildings such as City Hall, integrated across a great European style piazza with Symphony Hall and the conference centre, leading through to the resplendent canal district.

The mistakes – the Bull Ring and the cramped railways station – were made long ago,  and the newer public works easily outweigh them.

And yet London-based journalists still respond  with predictable amusement at the very notion  that such a place could ever be somewhere tourists might want to visit, in their coverage o the New York Times placing Birmingham at number 19 – above Vienna and the Maldives – in its list of The 45 Places to Go in 2012 thanks, among other things,  to its lively dining.

January 10, 2012 was an even more important day for Birmingham. The government approved the High Speed link (HS2) link from Londom , which will put the second city just 48 minutes from the capital. If tourists can take the Bullet Train in Japan as part of their holiday, what’s to stop foreign viitors popping up from London for a quick trip to the city’s architecture, art and culture?

These are my impressions and suggestions.

Goodnight, old industrial sprawl. Welcome, cool European metropolis. Birmingham is now an attractive and convenient destination for day trips — or weekends away, if you take in a show or a concert. Wide pedestrianised streets lead from the railway stations to most of the key attractions — some of the best performance centres in Europe, acres of sharp shopping, and Britain’s answer to the Venetian canalscape. I tuned tourist in Britain’s second city.

The 2009 Jeremy Paxman BBC series on the Victorians and their art inspired me to revisit the admirable Museum and Art Gallery (free), the grand city centre temple to 19th-century civic confidence. The bold, colourful paintings were the TV screens of the day, ranging from Biblical commentary to social observation — all “screened” in sumptuous colour on big walls.

My pick is Ford Madox Brown’s poignant The Last of England, with the muffled up couple on the boat to Australia. Earlier works include Sir Peter Lely‘s candid “warts and everything” painting of Cromwell, and the radiant bronze Sultanganj Buddha, unearthed in India in 1862. Normally galleries finish with a shop. This one routes you into the tremendous Edwardian Tea Rooms, for tea and scrumptious cakes. www.bmag.org.uk

Mendelsohn premiered his oratorio Elijah there. Charles Dickens took the stage to read from A Christmas Carol. Political speakers ranged from Lloyd George to Margaret Thatcher; performers from the Beatles and Count Basie. For over 160 years the Town Hall, in the style of the Roman temple of Castor and Pollux, was one of the great venues. Then, in the 1990s, that mean old double act Health and Safety closed the crumbling old trouper down. But £35m of grant aid contrived a happy ending, and in 2007 it reopened, restored to mock Roman magnificence, complete with its epic organ, twice as high as a double-decker bus. Even if you don’t stay for a performance, feel free to look inside both the Town Hall and nearby Symphony Hall (both www.thsh.co.uk), built in the 1990s on a equally grand scale, full of golden wood and delicious red lighting. And so acoustically refined you could hear a feather fall.

Birmingham may lack the palaces and cathedrals of European cities, but the “Venice of the Midlands” tag is beginning to stick. They’ve turned dingy towpaths into elegant brick walkways, where you swap banks over ornate iron bridges. Brindley Place is the city’s bright new aquatic heart, waterways lined with pubs and restaurants. Here the Mint Hotel has thrown out its TVs and fitted every room with sensuous Apple computers. The multimedia Macs provide free Internet and e-mail, and double as TV and CD and DVD players. From their rooms guests can research the nearby attractions — the Sea Life Centre, the Ikon Gallery, the National Indoor Arena, Symphony Hall, and the Botanical Gardens. www.minthotel.com

Britain’s bling capital, Birmingham’s Jewellery Quarter, still bustles, though on a much smaller scale than on the day in 1971 when the ageing proprietors of Smith and Pepper closed the business and walked out of the factory where their family had produced jewellery for 80 years, leaving everything as it was. It stayed like that, untouched, for years, as in a fairytale. Then the City Council took it over, made it safe and opened it to the public as the Museum of the Jewellery Quarter, still trapped in its time capsule. A guide takes you through the office and onto the workshop floor. They used to burn the floorboards to recover tiny specks of gold, like prospectors working Klondike rivers. One website voted it Europe’s third top free attraction after the Pantheon and the National Gallery. 75-79 Vyse Street  www.the-quarter.com Nearby is the Pen Museum, celebrating the one-time capital of the world pen trade. www.penmuseum.co.uk

Birmingham became an urban jungle in the 1800s, when a deluge of country folk surged in looking for work. The living was crowded and grim, if sociable, in the infamous “Back to Backs”, a form of housing once common in the Midlands and North. It’s all gone now, except one courtyard of 160 year old houses a 10 minute walk from New Street station. The city council and the National Trust and opened them to the public in 2003, restored in minute detail. There’s an hour’s guided tour through the four houses, each one marking a different period between 1840 and 1977. A restored sweet shop on the street corner is Proof that life wasn’t entirely bleak. You can buy from shelves packed with jars of humbugs, gob-stoppers and aniseed balls. 50-54 Inge Street, 0121 666 7671 www.nationaltrust.org.uk

Forget DVDs, downloads, and that travesty of an image you see on the back of an airline seat.  Nothing comes close to that moment of magic when the lights go down and the sound comes up for the start of a movie in a real cinema. And they don’t come much more real than the Electric Cinema on Station Street (0121 643 7879). In 2009 the Electric, officially Britain’s oldest working cinema, celebrated 100 years in the enchantment business. But rather than bask in nostalgia, they invested in a second screen in 2008, to show films in high definition. Patrons lounge back in soft sofas and text the Art Deco bar to bring them Parisien absinthe, champagne and plum or cinnamon and amaretto ice cream and bowls of nibbles.