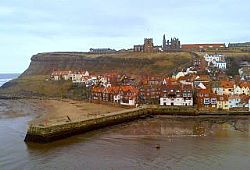 Whitby. Photo by the writer.

Daniel Day-Lewis has been seen (early 2017) in Whitby, where he is believed to be making his first film since Lincoln in 2012.It seem, too, that he has been reunited with There Will Be Blood director Paul Thomas Anderson. Some insiders think the film will be set in the London (or New York) fashion world of the 1950s. It appears to have nothing to do with Bram Stoker’s Dracula, until now the most famous piece of fiction associated with the town, tucked cosily down a deep valley on the North Yorkshire coast.

I visited Whitby recently. It is one of our most perfect little seaside resorts, and an ideal short getaway destination easily reached by train.

My must-do list includes some of Britain’s best fish and chips, lashings of Gothic horror, 199 famous steps, a hotel where Lewis Carroll stayed,  the statue to a great explorer and a peek into a jet black past.

It’s one of the great climbs in Britain, the199 stone steps leading up from the old town to East Cliff.  My ascent was a bit more leisurely than Mina’s frantic dash up to rescue her friend Lucy from an awful end in Bram Stoker’s Dracula – for me, too much stopping for photos over red pantiled roofs (many holiday homes for rent here) to the harbour.  St Mary’s Church, at the top of the steps, is an18th and19th-century compoit delight, with box pews where the faithful could hunker down in comfort for a long sermon, the three tier pulpit and central charcoal boiler.  Whitby Abbey is grey and stark and poignant in any light– smashed up by Henry VIII in1540.  www.english-heritage.org.uk

I travelled by train via Middlesborough. A connecting bus service runs from York to Whitby.  Advance returns, online at www.eastcoast.co.uk.