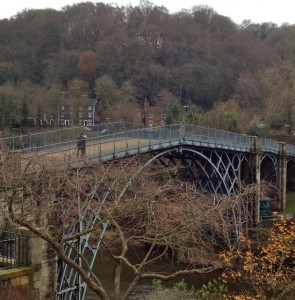 Ironbridge – first and foremost, and now heart of a World Heritage Site

The industrial age, the time of metal and machines and global manufacturing, began 250 years ago in a deep and tranquil river valley in Shropshire.

The fire, smoke and din are long gone, but the world-leading legacy survives on the banks of the Severn. It was a time for making heavy and powerful things, but there is more for the visitor to investigate than the remains of blast furnaces and water wheels.

My list includes pausing on the high apex of that ancient bridge, hauling a steam loco by hand, and a visit to what is said to be Britain’s last teddy bear manufacturer, its exports up, in part due to a weaker pound.

Set aside a long day for Ironbridge, but you still need several visits more to do justice to all ten Ironbridge Gorge Museums. The collection was launched in 1967,  “to protect the heritage and remains of the Industrial Revolution for future generations.” It was a visionary thing to do in a decade not noted for the conservation ethic.

Where should you start? I would recommend the Museum of the Gorge, to see the 40ft model showing the valley as it was on 12 August 1796, the day William of Orange visited the region.

And how do you get around? For a quick overview of the museums, spare yourself some complicated driving and take the “Gorge Connect” bus service. It links all the attractions, running from late March to October, every 30 minutes. The Annual Passport Ticket lets you return as often as you like to any or all museums within a year.

If you have time for only one of the powerhouses of the Industrial Revolution, make it the mighty Coalbrookdale Museum of Iron. They have preserved the original blast furnace. Here Abraham Darby made a technological leap to match the invention of the computer. He perfected the smelting of iron with coke rather than charcoal,

The Victorians dealt in power and fury and big machines. But they could also be poetical and wistful. There is an example in the Boy and Swan Fountain, cast in 1851 for the Great Exhibition. The Deerhound Table, made for the Paris Exhibition of 1855, shows their high design aspirations. The Coalbrookdale Cooking Pots shows them straightforwardly practical.

Next door there is a sharp shift into the 21st-century. Engenuity is a science and technology centre packed with hands-on activities and interactive exhibits. Do you have the strength to pull a locomotive by hand, or the wit to beat a robotic arm through the speed of your reactions?

The symbolic, and fully functioning, centre of this valley full of heritage is the bridge in Ironbridge. This wondrous structure, opened on New Year’s Day 1781, is in fine shape. It rises to a steep peak high above the juvenile river Severn.

The bridge is a testament to British high ambition during the 18th century, and to the endurance of pioneer metalwork. It was the first arch bridge in the world to be made from cast iron, produced at the new Bedlam Furnace just yards away.

It stands today, open only to pedestrians. They closed it to road traffic surprisingly early, in 1934. There is an overwhelming air of tranquillity. Nature has reclaimed what must have been a frightfully loud and odorous place. The original Tollhouse gives an overview of the bridge’s history.

For the best close-up of the iron bridge, you need to book into the cosy little apartment on adjoining Tontine Hill next door, and insist on the front bedroom. The same owner run the cafe below and Eleys Pork Pies next door. (They are made on the premises along with pasties and sausage rolls).

This is a happy example of the power of tourism to revive. This was a shabby and run down place in the 1960s, before the Ironbridge phenomenon.

Other businesses, as distant as you can imagine from cast iron river crossings, grew up around the Gorge. Factories making decorative ceramic tiles and delicate, hand painted porcelain thrive to this day. Merrythought make all its handmade traditional teddy bears in Ironbridge. A small museum displays their historic teddies.

Merrythought has been producing handmade bears here since 1930. Three sisters who took over the business on the death of their father in 2011, run it. The bears have a cult following, particularly in the Far East. A weaker pound, following the 2016 EU Referendum, is helping exports.

At the peak of its activity, Ironbridge would have been one of the noisiest places on earth, all fire and crash, producing metal for the world. And yet people still needed sweetshops and fishmongers, pubs, post offices and drapers. Just like today, they had to shop.

Blists Hill Victorian Town, then, is the Gorge museum to which it is easiest to connect. An authentic 19th Century High Street, contains traditional shops, demonstrating proud old retail values. Behind the dinging bell of each front door, there are attendants, dressed the part, and happy to chat about the finer details of whatever they happen to be selling.

There is excellent walking in Ironbridge and the Severn Valley, now that it’s largely returned to nature. The gorge contains a complex network of footpaths and cycle trails, routed along old railways and following historic ways the workers used to take. You may chance upon tantalising remains of historic buildings. And fine old trees planted to improve the workers’ environment. Some have grown huge and spectacular.

The choice of footpaths include Ironbridge Way, Silkin Way and the Severn Valley Way. It’s an easy cycle or walk down the banks of the Severn, described as “one of the most secluded and prettiest traffic-free rides in England”, the 10 miles to Bridgnorth, where steam trains on the Severn Valley Railway run.

The writer travelled courtesy of Virgin Trains (to Wolverhampton, with local services to Telford). www.virgintrains.co.uk/