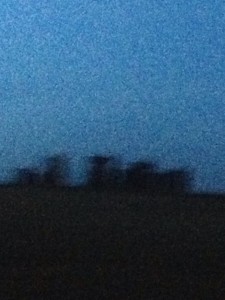 Letter to the Guardian today.

You highlight (Stonehenge tunnel: plans for £1.6bn scheme published, 8 February) Highways England’s misguided belief that the scheme will restore a sense of beauty and tranquillity to the ancient landscape around Stonehenge.

Despite the small changes made to the scheme, it will still cause irrevocable damage to a unique piece of our national heritage, and gouge a widened road across the landscape.

If Highways England was serious about “enhancing and protecting” this unique and beguiling place, it would propose a tunnel that is long enough and deep enough to avoid the world heritage site altogether.

As recent archaeological finds show, the earth that surrounds Stonehenge still harbours secrets about our past, and to damage our collective history in this way would be a national scandal.

The erection of the monumental Stonehenge was an ancient people’s attempt to remake the landscape around them in their image. We seem intent in doing the same; only our attempt is a monument to our inability to sensitively conserve our heritage.
Daniel Carey-Dawes
Senior infrastructure campaigner, Campaign to Protect Rural England

Historic England, English Heritage and the National Trust have all said that although they back the idea of a tunnel for the A303, all three are worried that the proposed western portal is too close to the Normanton Down Barrows, an important collection of tombs which are an important feature of the wider Stonehenge landscape. The three bodies all have a statutory interest in the site.

Transport minister Chris Grayling approved plans for a tunnel 2.9 km (1.8 miles) long on the A303, the London to Exeter road, to ease traffic congestion take the road away from the stones, which it currently passes close by.

The A303 is one of the few major roads in Southern Britain that, in my opinion, is still a pleasure to drive. This is the alternative route from London to Exeter. It’s shorter than the M4 and M5, a
fine and scenic route, cresting the wide open Salisbury Plain, and climbing and speeding down the steep banks of the Blackdown Hills. But there is a place on this road that elevates it to the status of one of the great journeys of the world.

Just west of Salisbury, running down an incline, you spy a circle of grey, gaunt stones, massive, mysterious. We know it’s Stonehenge, yet the thrill is as instant as ever, however many times we see it. Imagine what it must be like to come across this powerful place unexpectedly, as many people surely do every day.

There were innocent days, not so long ago, when you could park your car alongside and walk among these powerful stones, erected between 3,000 BC and 1,600 BC, and whose purpose we still don’t fully understand. As late as 1976 visitors could walk freely in the central circle, and even carve their names on the stones if the custodians weren’t looking. By then we were already well into the “what we do about Stonehenge?” debate.

In 2013 the authorities finally “solved” Stonehenge, in the practical sense of presenting it to visitors, with the opening of a spacious visitor centre well out of sight of the stones.(The land is owned by the National Trust, and administered by English Heritage.) I believe it does “restore the dignity” of the monument, as one of the speeches on opening day put it.

Now it looks as if the one remaining interference from modern life that prevents a sense of utter timelessness descending on this magical and perplexing place is to be removed, so that it once again stands remote and alone in the middle of an empty landscape. In January 2017 the government approved plans for a tunnel 2.9 km (1.8 miles) long on the A303 to take it out of sight of the stones, which are only a part of a wider World Heritage Site encompassing many hectares of surrounding archaeology-rich downland.

But is a 2.9 km tunnel long enough? The National Trust, which owns land in the area, has said it is. Or should it be 4.5 km (2.8 miles)? The organisation 38° launched a petition calling for a “deep bored tunnel” of at least this length.  “Anything shorter would cause irreparable damage to this landscape, in breach of the World Heritage Convention.”

It notes: “Stonehenge World Heritage Site, which has been called “the most archaeologically significant land surface in Europe”…is 5.4 km across. All of it makes up a huge ancient complex that holds many secrets yet to be discovered.

38° contends: “All archaeology in the construction zones would be destroyed and the A303 would become the largest ever human intervention in an area fashioned and revered by over a hundred generations of our ancestors.”
There had been calls to restore the isolation of Stonehenge for many years, but that didn’t stop some inappropriate visitor buildings being erected a short distance away, while the A303 became busier and busier.

This is what used to happen. You approached along the A303, then forked off to the north on the A344, which ran within yards of the outer stones. On the right was the old visitor centre, a 1960s facility connected directly to the stones by an underpass.

You arrived suddenly at this uninspiring touristic pitstop, with no chance for a sense of mystery and wonder to develop. There had to be a better long-term solution, to move visitors and traffic away from the stones, but it took 30 years for it to happen.

I wrote an article for the Sunday Times, in August 1983 outlining proposals to remove 20th century clutter from and around Stonehenge. (Plans to close the A344 were originally announced in 1927. In 1993, Parliament’s public accounts committee described the treatment of Stonehenge as a “national disgrace”.)

In 2011 the £27m project went ahead. The A344 was shut at its junction with the A303, the section that runs past the stones was grassed over, and the old visitor centre removed and replaced with the new interpretation centre, well out of sight. But the A303 rumbled on.

The present road has enabled huge numbers of people to see the stones as they pass, and they are usually going at a respectful crawl on this busy stretch. Who knows what inspiration has been given to young minds by the awesome sight. But the road was never in the plan, and it had to go.

A writer on the New Civil Engineer website noted that the tunnel proposal even at a modest 2.1km long  “would provide the opportunity to re-unite the landscape currently severed by the A303 and re-create a much more sympathetic landscape which would be almost authentic to the stones’ original environment.”

Those arguing for 2.8 miles say this would more fully solve both the traffic problems with the A303 and visual blight around this important part of our heritage. Public consultation on the plan continues until June 2016.

Now is the time, even at high cost, to do the job properly and give this place the full respect it deserves.