The ferry Glansteffan began regular services across the Towy Estuary, from Ferryside to Llansteffan in Carmarthenshire in August 2018.  There was a two year pause during the Covid lockdowns. Now the first amphibious ferry in the UK is back. It makes its first crossing with paying passengers on Good Friday, April 15th, 2022. This is an article I wrote in 2018, updated. All photos are mine, from launch day, unless indicated.

For years Llansteffan has been a tantalising prospect for people in Ferryside and the many tourists who pass through on the railway that hugs the coast and the Towy Estuary in Carmarthenshire, Wales. So close, with a line of prettily-coloured waterside houses and the magnificent ruined Norman castle on the hill, yet quite out of reach over the tidal waters.

Places often lose touch with the specific function contained in their name, but that shouldn’t apply when the key word is “ferry”. You would expect it still to mean something in a practical sense, as in a way to cross over, unless the gap it used to close has been replaced with a bridge or tunnel.

In August 2018 Ferryside recovered its original purpose for the first time in 50 years, when Glansteffan, an agile little boat on wheels, once again made the crossing with the public aboard, from beach to shining beach.

These two places are so close that, at very low tide, you could have a shouted conversation across the narrow band of the river Towy. Yet before the new service, run by Carmarthen Bay Ferries, began in August 2018, the 17 mile road trip between the two villages, via the nearest bridge at Carmarthen, took over 30 minutes by car. Public transport, by bus and train, takes a lot longer. (There is no railway on the western shore to Llansteffan.)

The ferry provides a handy shortcut on the Wales Coastal Path, cutting off a long trek up to Carmarthen. It runs from close to Ferryside station, which has direct connections from Cardiff and Swansea and as far away as Manchester. One train a day links the village with Paddington Station in London. 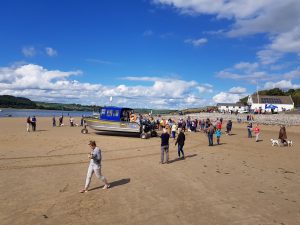 A £300,000 grant from the Big Lottery Coastal Communities Fund, administered by the government and the devolved administration in Wales, drawing on income from the Crown Estate’s marine assets paid for the nimble purpose-built aluminium-hulled boat designed for these waters. It is fitted with a ‘Sealegs Amphibious Enablement System’ developed by a New Zealand company. This enables the boat to drive out of the water onto the sand beaches on both sides of the estuary on three wheels. The wheels work rather like those on an aircraft undercarriage. They are fitted with hydraulic motors; the front one is steerable.

The hull, manufactured in Holland and assembled at a boatyard in Pembrokeshire, allows the craft to skim over the water rather than ploughing through it, at a top speed of 30 knots. Glansteffan makes the crossing in five minutes, for up to 6 hours a day. Because of the wide tidal range the ferry will only operate when there is sufficient water in the estuary.

The boat, which bristles with technology, including a depth gauge, and a GPS chart plotter, seats 10 passengers, and up to 4 bikes or two wheel-chairs. Bikes are free on the ferry.

It was a pleasant, sunny day for the launch in August 2018, which was marked by some sweet singing by a soprano soloist.  There was still enough left of the summer of 2018 for the idea of a quick leisure excursion between the two villages to take hold. 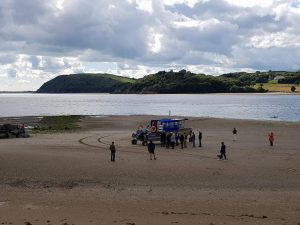 Ferryside and Llansteffan are likely to have been linked by boat for centuries. Pilgrims would have needed to cross these waters on their way to St David’s  Cathedral, further west in Pembrokeshire. The Normans probably operated a Llansteffan to Ferryside ferry 900 years ago when they controlled Carmarthen – seven miles upstream – and operated castles at Llansteffan, Laugharne (west around the next headland), and Kidwelly, just a few miles east.

Thereafter a ferry would have operated down the centuries, a vital link on the coastal trading and travel route, long before the main road was built through Carmarthen and before the London to Pembrokeshire railway was established in the 1840s and 50s.

A sailboat ferry operated within living memory and was popular in the summer when trains brought holidaying miners from the South Wales valleys to Ferryside station for the crossing to Llansteffan. But the motorcar, which finished off so many rural railways, found this river service an easy prey. The ferry last ran sometime in the 1960s.

The ferry service – Carmarthen Bay Ferries is, in commercial jargon, a “Community Interest Company” – created a number of new jobs. As well as operating daily for much of the year, Glansteffan will also make trips to local points of interest. Occasional destinations could include Laugharne, the main location in the BBC 1 series “Keeping Faith.”

The maxim “use it or lose it” is acutely relevant to the new ferry.  One likely use is by cyclists, as a way to miss out the busy road to Carmarthen on their route around the coast.

In the summer months at least the railway could help it stay, figuratively, afloat. Many trains use this line and stop at Ferryside station. The rail companies could help by promoting excursions over the estuary, with the impressive and imposing Llansteffan Castle as one attraction.

The artist Turner painted his  “Llanstephan Castle by Moonlight, with a Kiln in the Foreground” here in 1795 on his tour of South Wales. He would likely have crossed on the ferry. The work is in the Tate Britain in London. 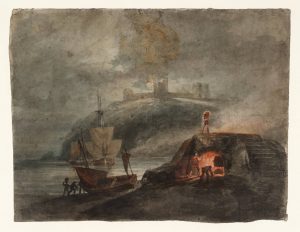 Llanstephan Castle by Moonlight, with a Kiln in the Foreground 1795-6 Joseph Mallord William Turner 1775-1851. Tate Britain.

In an early example of inter-community cooperation, pupils from the two villages’ schools came up with a unifying name for the new ferry, Glansteffan, sensibly, as one news report put it, discarding any thought of the supremely unimaginative Boaty MacBoat face.

This isn’t exactly a Montague and Capulet situation – the two villages have no reason to dislike each other. They just don’t know each other. Market research suggests that over three quarters of residents would use the service. If new friendships can be forged over the water, that might be just another way of supporting the ferry link for years to come.