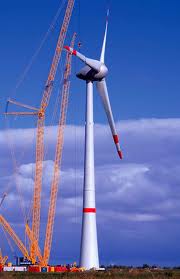 Is this as big as wind turbines get, without a material shift?

To adapt  the  popular misquotation  of Ralph Waldo Emerson – he didn’t actually say the world  would beat a path  to the door of the inventor of the better mousetrap,  but it’s such an optimistic message to entrepreneurs so why waste it? –  will the  green energy industry  soon be looking up the route to Case Western Reserve University  in Cleveland,  Ohio?

Researcher  Marcio Loos  may just have hit upon the superior wind turbine,  capable of capturing more renewable energy per inch of spinning blades than materials currently used.  And he’s done it by applying nanotechnology.

The latest generation of wind turbines,  some as tall as 150 m, do a very good job of converting moving air into clean energy – 7.5 MW in this case.  But they are still mere pinpricks on the renewable energy landscape –  whatever the NIMBYs think of them –  meeting a modest part of our  energy requirements.

Either we  erect an awful lot more  of them,  in the face of fierce local resistance,  or they need to be bigger yet , to capture more wind. But bigger, heavier blades  in existing materials  will affect  the stability of the turbine,  and don’t necessarily convert into more energy produced. Lighter, stiffer blades would make far more sense.

A paper (and video) published by Loos and colleagues notes that to achieve the  projected expansion in wind power,  stronger and lighter materials with  higher strength to mass ratios could enable larger rotors to be cost-effective.

Marcio Loos took to his lab in Case Western’s Department of Macromolecular Science and Engineering on weekends and  may have come up with an answer:  he has built the world’s first polyurethane blade reinforced with carbon nanotubes.  His prototype 29-inch blade is  significantly lighter and eight times tougher and more durable blade materials.

His professor  noted the  “significant potential of carbon nanotube reinforced polyurethane systems for use in the next generation of wind turbine blades.”