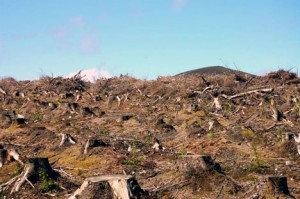 Replanting a cleared forest in China.

Fixing the atmosphere, where (so most scientists believe) a buildup of CO2 is causing the planet to overheat, is an immensely daunting challenge, and with today’s technology probably an impossible one.  All we can do is stop the problem getting worse.

But could there be a much more manageable, even potentially climate-stabilizing, target we could meet right here, down at ground level?

Clearfelling tropical rainforests became the metaphor for environmental destruction in the 1980s, and no sane environmentalist would suggest that that devastating loss could ever be reversed, or at least for many years.  Original forest is an enormously complex organism, where unfathomable numbers of species interact and symbiotically relate.  You can no more recreate that astonishing intricacy, then you can rebuild a mediaeval cathedral with bricks you buy at the local DIY.

But any tree is better than none at all. And proposals for a global effort to restore 150 million hectares of degraded and deforested lands by 2020,  launched in Bonn this summer (2011), is another good example of sensible and forward-looking people fighting back on behalf of the planet.

Göran Persson, former Prime Minister of Sweden, is proposing a Global Restoration Council to kickstart the restoration action, and build support to  implement The Bonn Challenge. The Council will be facilitated by the World Resources Institute (WRI) and the International Union for Conservation of Nature (IUCN).

About half the world’s original forest cover has been lost or degraded, much of it in recent years. The Convention on Biological Diversity (CBD) “Target 15” calls for at least 15 percent of degraded ecosystems  to be restored by 2020. The Bonn initiative could make  an important contribution to meeting that target.

Anyone who has seen the rather desultory cosmetic and landscaping planting around new houses and businesses in the UK, and noted them dying in the next dry spell, may need some convincing that the world can actually plant trees on such a massive scale and see them survive.

However the list of successful replanting schemes is beginning to build.   While the heart-wrenching clearfelling of prime forests goes on – Brazil and Indonesia are among the prime culprits at the moment – there are good examples of replanting in Africa, which is where new research suggests the greatest opportunities for restoring forests to be.

A recent study by the WRI and South Dakota State University, with the IUCN and the Global Partnership on Forest Landscape Restoration,  earmarked about 450 million hectares of degraded land in Africa as suitable for forest restoration. That’s an area the size of the entire European Union.

Sparsely populated, little used areas may be best for wide-scale restoration.  The work needn’t cost much. Projects can be based on keeping fire  and grazing under control so that trees can naturally regenerate.

Areas  of more intensive land use  could be given a patchwork of tree cover –  known as “mosaic restoration”. Intensively farmed and developed areas  may be suitable for “protective restoration”, where trees are planted  to halt erosion on steep slopes, along rivers and streams.  New trees  could serve as windbreaks, and give shade along roads.

In West Africa farmers are already applying the theory. 20 years ago Niger was gripped by famine. Deserts were spreading. Poverty was gripping.  Now five million hectares has been restored to productive farmed woodland. 200 million new trees have been planted,  and they are being looked after. The trees enhance farm yield and provide income from wood sold as fuel.

Rwanda is also committed to forest restoration. It has support from the United Nations Forum on Forests;  outside donors are interested.

In both cases leadership by national governments may be the crucial factor. Rwanda has adopted policies to encourage tree planting. In Niger  moving ownership of trees from the state to farmers whose land they are on is seen as important.They have an incentive to manage the resource as their own.

These new trees series will provide living sinks to absorb CO2. They will shield land from winds and rain to check erosion, and provide shelter  for local people.

They will also provide a limited habitat of fauna and flora, although it’s probably too early to say what the longer term ecological benefit will be. In the UK, for example, it took many centuries for original ancient woodland to establish, and even several hundred years after mediaeval clearances, the same trees growing on the site of  the former wood  are a modest substitute  for the habitat that was there before.

So recreating something as  complex as a Brazilian rainforest, is going to be so much harder and could take millennia to achieve. Nevertheless, WRI was surprisingly hopeful in its release in May, 2011. it identified more than 2 billion hectares of the world’s deforested and degraded lands  as available for restoration, in its assessment with South Dakota State University, and IUCN . That nearly doubles the previous estimate, reflecting greater precision and a better understanding of the conditions needed for forests to grow.

“The policymakers and investors gathering in Nairobi  [for a conference last May] may well be onto something big.”

World Resources Institute WRI is a global environmental think tank “that goes beyond research to put ideas into action”.