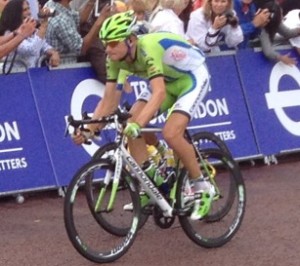 Have we seen the start of a mass spectator event culture in Britain? The astonishing success of the staging of the first three days of the Tour de France on the urban streets and rural roads of England, when an estimated 5 million people are said to have turned out is something very few people would have predicted even three years ago, before the Olympic Games showed how enthusiastic and supportive the British could be.

There are features of a 100 mile or longer bicycle road race that make it particularly  attractive to advertisers, tourist boards, and promoters of any particular landmark or feature that the roving cameras may see. Let’s compare the coverage of the Tour in Yorkshire for visual appeal with the two other, competing, sports events taking place on its second day. The cameramen at Wimbledon show us moody skyscapes over a dramatically foreshortened London, but that’s about as creative as they can get.

At Silverstone, on the border between Buckinghamshire and Northamptonshire, the cameras cannot even see beyond the confines of the grandstand and the course – perfectly fit for the purpose they serve, but with no particular visual impact, and without any tourist appeal.

There is another thing. Compared to those two established events, bicycle racing is instantly accessible. Unlike the knowledgeable spectators at the British Grand Prix, and the men’s tennis final at Wimbledon, a huge majority of those assembled millions knew little or nothing about the sport they were watching. It didn’t matter: it was a race. They could work out what was going on.

The British Grand Prix was a different matter. Motorsport aficionados would have found the British Grand Prix as fascinating as ever, I’m sure, as the milliseconds ticked away during refueling in the pit lane, and drivers played out a tense strategic game on the track. But as a casual observer I must say the most exciting thing was the start, seeing who took the lead after the first two corners, and the high-speed repair team mending the crash barrier after the first lap collision.

Britain’s showpiece tennis event, at Wimbledon, was more accessible, if less essential viewing without a British finalist. The game is more easily understood by the uninitiated, but it will never be a mass spectator, event. Numbers are limited. Spectators who haven’t pre-booked arrive very early, and queue for hours to get in.

Arriving early and reserving your (free) place was certainly advised during the three days of Le Tour in 2014, in London and the other towns and cities, but there were very many people who simply had to walk out of their front door, or down the street to see the best bike riders in the world speeding past. And such spectator numbers have probably never been seen before, even during the 2012 London Olympics for the free outside events such as running and cycling.

The question now is not if, but where, the Tour will return to Britain. I asked somebody at Visit England where he thought it should go next and he suggested Hampshire and the New Forest. I would choose the Cotswolds, and a day in Wales. And I would be surprised if we didn’t see the race back in Yorkshire within the next 10 years.

Le Tour shouldn’t come to Britain every year. We would lose the sense of novelty, and we would expect the same huge crowds, and be disappointed if they didn’t match 2014. Better it comes back in four years time or so, after another big buildup. So how do we fill the gap? There is the Tour of Britain cycle race, which must surely attract a bigger following, just to show that we can support our own race too, after the Tour de France. In 2015 England hosts the Rugby World Cup, with the few games in Cardiff. But rugby is still a minority sport, and one restricted to paying spectators.

That leaves one new and potentially quite exciting sporting event to look forward to, the final round of the new Formula E electric car competition, “the world’s first fully-electric racing series“, to be held in London on June 27th, 2015. There are few details so far, but the organisers are negotiating the use of Battersea Park. Whether or not the race will emerge from the park onto public roads has not yet been announced.

Electric, zero-emission cars capable of 140 mph have been designed for this competition, which begins in Beijing in October 2014 and moves on to various world cities, “racing around their iconic landmarks”. For the first two years all drivers will drive the same standard design car, before developers are allowed to release their own, improved models. Races will last about two hours, and drivers will change cars rather than refuel. (It would take too long to recharge the battery.)

This should be a sport for the general spectator, as opposed to the F1 expert. Spectators will even be given the chance to participate, using social media to say which driver they want to be allowed to use a two second burst of power to enable them to overtake. Driving conventional (non-electric) very powerful fast cars around city streets in a road race is practicable, as we know from Monaco and Singapore. However it’s hard to see how screamingly loud, heavily polluting vehicles could now be allowed onto the streets of cities such as London, particularly after the serious pollution episodes of last winter.

Electric cars are quite another matter. Formula E fits neatly into the category of environmentally acceptable event – and if you think there is far more carbon invested in building a battery powered racing car than a racing cycle, remember that Le Tour came with its own heavy carbon footprint, with all those support vehicles, as well as car journeys spectators took to the various places. And just as cycling is an activity many people will take up, many of us, too, within our lifetimes will be driving electric cars, out of necessity as fossil fuel becomes more expensive, and because we will have to cut our use of fossil fuels to meet CO2 emission targets. The organisers hope these races will encourage people to warm to the technology.

The settings for the electric car races around the world may turn out to be as dull and prosaic as the current Formula 1 racetracks, with no hope of a backdrop as lovely as the Yorkshire Dales, but I would be surprised if the host cities did not try to make a touristic virtue out of them, and show off their attractions. By next summer Battersea, one of the most spectacular settings for events at the London Olympics, will be well prepared to draw maximum publicity from the event, as well as drawing in all those enthusiastic British spectators eager for a fresh road to stand alongside.