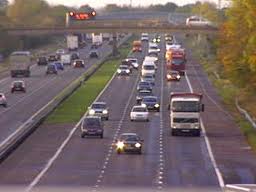 What if motorway driving could be as hands-free as sitting on a train?

Imagine sitting in your car on the motorway at 70 miles an hour.  You’re in the driver’s seat, but your hands are off the wheel, you are drinking a cup of coffee and studying those important notes for the meeting you’re heading to 100 miles away.

Do you want to reread that?  Your hands are off the  steering wheel. In fact, you’re not driving the car at all.

If you think the idea is fanciful, and futuristic in a Flash Gordon sort of way,  realise this:  the concept has already been successfully tested, and it could be available as a transport option in the not so distant future.

This is “vehicle platooning”. Volvo, part  of  the SARTRE project, recently showed that the idea works on a test track at the Volvo Proving Ground , Gothenburg, Sweden.

The idea is that a convoy of vehicles drives up the motorway.  A professional driver in a lead car  heads up a line of other vehicls.  Sensors in each car measure the  distance and direction, and adjust to the vehicle  in front.  Cars are totally detached, and can leave the procession at any time. But once in the platoon, drivers can relax and do other things while the platoon proceeds towards its  destination.

The Swedish tests involved a lead vehicle and single following car. The steering wheel of the following car moved by itself as the vehicle  followed the lead truck around the country road test track. The driver  was able to drink coffee  and read a paper, using neither hand nor foot to operate his vehicle.
Among the improvements “platooning” is designed to  bring  are:

Road safety – it minimises the human factor (and driver fatigue),  the cause of around 80 percent of road accidents.

Platooning allows the driver to do other,  and productive, things; and because vehicles  would travel at highway speed with only a few meters gap, it may also relieve traffic congestion.
A press release from Volvo said   the technology development was well underway, and  it could go into production in a few years.  What may take substantially longer are public acceptance and legislation.  Winning acceptance  across 25 EU governments will be a big challenge.

Realistically it would probably work first on motorways, where drivers  travel long distances, and there aren’t many junctions to confuse and irritate other drivers. It’s hard to see how it would work on A roads, as they operate today, with lots of junctions and roundabouts.  But by the time it is applied to lesser roads,  car technology is likely to have changed enormously;   our vehicles  will be far more automated, and engineered for safety.   This should make integrating with platoons a lot easier.

The SARTRE (Safe Road Trains for the Environment) project started in September 2009 and  runs for three years  (www.SARTRE-project.eu) .  The  programme,  intended to “facilitate the safe adoption of road trains on un-modified public highways with full interaction with non-platoon vehicles” is  part funded by the European Commission.