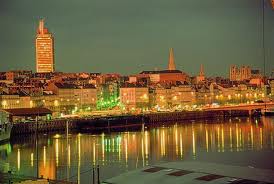 Good old Google.  They don’t need, like everyone else,  the occasion  of the big round number  anniversary  to celebrate  somebody’s life.

How long did it take you to work out what the antique portholes meant in Google’s ornate and rather clever  (well, aren’t they all?)  doodle  on Tuesday  February 7?

It is, of course, the submarine from Twenty Thousand Leagues Under the Sea,  and the man being honoured is its writer Jules Verne,  who would have been 183 years old on that day.

He lived in Nantes,  in western France.  I was there recently, and I wrote this.

Follow the long line of proud châteaux down the river Loire and you reach Nantes close to the end. It boasts the greatest castle of them all. Lured by a born-again biscuit factory, a monster mechanical elephant, a decorated restaurant from the Belle Epoque, and the spirit of Jules Verne, I took a high speed train trip and found so much to do in this handsome old maritime city, voted  the best place to live in France in a recent survey.

“You must see the elephant,” my guide said.  I imagined some sad circus specimen, railing against its imprisonment. But this is probably the world’s greatest, proudest, loudest, free-est and most public-friendly pachyderm. The mechanical beast, 40 ft high, 24 ft wide, emerged trumpeting from its hangar for a 45 minutes circuit of the old Nantes  docklands, with 49 people aboard. It makes even those computer-generated mammoths in Lord of the Rings look small.

It moves at a quarter of a mile an hour, so there’s ample time to trail alongside and marvel at the scale of this £1.5m, 45 tonne behemoth made of American Tulip wood. Complicated gears allow it to lift its feet in a convincing way. Stray too close and people on board will spray you from the creature’s swinging trunk – they press a button and out comes the mischievous water.

The trundling elephant was the first creation of the Machines de l’Ile programme. They are building a carousel of fantastical Jules Verne-inspired dream machines on this once benighted industrial wasteland. I inspected the giant water propelled flying flea. And the first trial branch (stuffed with living plants) of a simply enormous tree.

The “dream machines” are the most exciting feature of this  ambitious, resurgent city’s transformation of the old docklands and shipbuilding area in the Ile de Nantes, in one of largest urban projects in Europe. Two massive cranes, one yellow one grey, honour the old port heritage. The huge metal rings spaced out along the north bank, next to the cafes on the promenade, are the dominant features.

I travelled to Nantes by Eurostar and TGV, in two easy stages from London, now easily reached for a comfortable weekend away. (I prefer to change in Lille, but if you choose Paris, there is a thrilling non-stop sprint back, 200 miles in just two hours, flashing past tantalising glimpses of the Loire Valley.)

The city’s big statement is the sumptuous Castle of the Dukes of Brittany in the city centre, the last and greatest of the chateaux of the Loire, recently restored to high pomp (entry free). It is for locals as much as for visitors. I saw city workers and students spread out on the grass in the deep moat, taking their ease.

I joined the parade along the top of the colossal battlements, 1500 feet long, studded with seven mighty towers, with wide views over the nearby cathedral and rest of the city. (The gorgeous old quarter, Ile Feydeau, has many grand houses from the 1700s.) In the castle’s inner courtyard is the dukes’ 15th century  palace, and a very high-tech museum, telling the city’s story from the Romans, via the Nazi occupation, to its self-confident present.

A short walk away, two of the city finest buildings face each other across the wide Place Graslin. On one side is the gracious Théâtre Graslin, power dressed with eight Corinthian columns topped by muses in ancient costume. Opposite is the remarkable La Cigale brasserie, little changed since it opened in 1895. It has five high-ceiling dining rooms from the extravagant Belle Epoque, tiled walls and ceilings decorated with succulent fruit and fabulous creatures.

In the city centre streets look for half timbered houses, and the C19th arcade Passage Pommeraye. It contains boutiques under a Crystal Palace-style glass roof, with a wide wooden staircase lined with statues. In Chocolaterie Gautier, traditional chocolate shop on Rue Fosse, you sit at a green circular seat while they pack your order.

The most conspicuous display of Nantes’s vision and ambition, as it picked itself from industrial decline, is the tram system. Sleek streetcars snake through the wide pedestrianised city centre, and head along the banks of the Edre, Loire’s pretty tributary lined with parkland and colourful houseboats.

(The Pass Nantes, the go-anywhere card, gives unlimited rides on all public transport, and the boats on both rivers, with free entry to 25 attractions, including the marvellous art gallery. The 24 hour card is Eu18; 48 hours – Eu28.)

I crossed the river by Navibus to the gentrified fishing village Trentemoult for a big choice of waterside eating. Then back to the Museum of Jules Verne, in a C19th mansion on the hill (Butte Saint Anne).The writer was born here in 1828. On another excursion I took the guided busway, to the old Lu biscuit factory, now an arts centre, gallery, bar and hammam.

I stayed in the Hotel  Pommeraye. The clocks behind reception showing other time zones feature, quirkily, only Valparaiso and Zanzibar. (www.hotel-pommeraye.com) It’s a smallish, comfy city-centre hotels with an excellent buffet breakfast. You are in the pedestrianised shopping street in a minute. www.raileurope.co.uk, 0844 848  4070.)