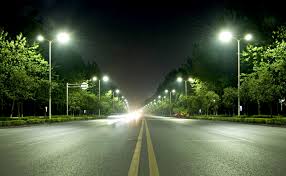 LED streetlights have appeared in my village, one of the first pieces in the jigsaw which will depict a truly low carbon future, as seen from my doorstep.

They come not so long after the first electric car was spotted here. While electric cars are still a better-off person’s indulgence, that essential street light above your head is one of the most conspicuous things the council does for you. And you can’t object to the change, even if you are the most fervent climate denier. Because as well as saving a lot of carbon they are much cheaper to run, and repay the initial expenditure in a matter of a few years.

The county council (it is one of very many councils and municipalities around the world doing the same) approved a three year LED lighting replacement strategy across Buckinghamshire in June 2013. In all 7500 street lights will be replaced, mainly across the A & B road network. The new LED lanterns will be fitted on existing lamp posts.

In a press release the council said LED lamps were now an established and reliable technology. They provide on average a 50-60% reduction to annual consumption over conventional sodium lights. Up to 80% is said to be achievable with the use of smart controls.

The press release notes that the cost benefits of switching to LEDs have increased considerably in the past year or so. Until 2013 the high price of fitting them largely cancelled out the benefits, except in larger projects where all of the units are replaced.

That has changed. Prices are now comparable to traditional lanterns and the case for fitting them is compelling. There has been opposition, however, from people living close to the lights will claim that white light disrupts sleep and may also disturb wildlife.

At the same time conventional traffic lights in Bucks are also being replaced with LEDs. The project is being funded through an interest-free financing scheme that supports technologies that achieve cost effective CO2 savings. With the estimated energy savings alone, this scheme should have paid for itself within six years.