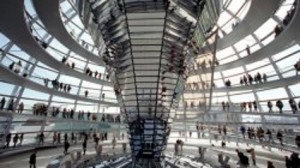 On 10 November 1989, BBC reporter Olenka Frenkiel walked into the Newsnight Berlin studio, unannounced, with a chunk of the Berlin Wall, which she had appropriated just as bulldozers began to demolish the structure that had defined the deep fissure between East and West for a generation.

She put it down on the table in front of presenter Peter Snow, who was leading a live discussion with Jens Reich and Thomas Kielinger.

“I straightened up and walked off,” Freckle recalled. “Peter began to understand it was a brick not a baby. Jens Reich began to cry.”

“It was one of those really rare, truly startling, moments of live television showing history in the making – and all it really consisted of was a lump of brick, a reporter with initiative, and a presenter who let it happen,” said John Morrison, who edited the show that night.

This was the day after the wall simply “fell”, without any violence, as border guards gave up trying to defend it and East Germans began to pour across into West Berlin.

As a simple “Here you are; it’s over; it’s down” image, it summed up to me as directly as any of those other historic shots of flag-waving, cheering crowds and cowering dictators in those ecstatic days of the collapse of communism at the end of the 1980s.

It also meant, more specifically, that the great city of Berlin was open, unified and free once again for the first time in 60 years.

Berlin has boomed since the two halves, East and West, were joined after the fall of the Wall. 25 years on, the city is one of the most dynamic metropolises in Europe.

Germany’s capital is now Europe’s fastest-growing tourist destination, (it is Europe’s third-most visited city, after London and Paris). According to Stefan Nicola  writing in skift.com,, tourism made up 10.6 percent of the city’s gross domestic product in 2013. The figure for London was 5.1 percent.

I took the train to Berlin and drew up a list.

This is the best way to Berlin. Take the afternoon Eurostar to Paris, then the overnight sleeper, www.raileurope.co.uk. You alight at the grand and airy Hauptbahnhof (central station, opened in 2006). Europe’s largest through station is an architectural thrill, under a 1200 feet long arch of soaring steel and glass. Natural light floods the platforms, on five different levels. Trains leave for as far away as Moscow.

The range of Berlin’s architecture is enormous, stretching from  the historical to high modernism and postmodern. From the station, on former no-man’s land between East and West, it’s a 10 minute walk to the rebuilt Reichstag (Parliament building), topped by Norman Foster’s sparkling glass dome. Nearby is the heart of Berlin’s elegant restored Prussian heritage. I walked from the monumental Brandenburg Gate, on down Unter den Linden to the swanky shops of Friedrichstrasse.

To mark the 25th anniversary, the city planted 8000 balloons to mark a Lichtgrenze  (“border of light”), tracing the former course of the Wall over 15 kilometres.

The Wall was mostly demolished in 1990. A small section stands on the southern border of Wedding and Mitte. Checkpoint Charlie, the infamous border control during the Cold War, is now a tourist attraction, although it might have too much of a theme park air for some tastes.

It is a chillingly simple reminder of the power of evil. In Opernplatz I looked down through a plain glass panel in the flagstones onto empty shelves in what looks like a small underground library. There’s space enough down there for the 33,000 books — by Hemingway, Freud, Einstein, Kafka and many more – torched on the orders of Goebbels one May evening in 1933.

Nearby is architect Peter Eisenman’s stark and sombre Holocaust Memorial. I walked through a claustrophobic grid of 2711 grey slabs tombstones, one for each page of the Talmud. Another stage in the city’s exposure of its dark past is Topography of Terror. This plain exhibition hall recounts the crimes devised in Gestapo headquarters, which stood on this site between 1933 and 1945.

There are many green spaces in this city. The vast Tiergarten park (free), for example. Grunewald is Berlin’s largest forest, to the south-west of Charlottenburg. Get there by S-bahn. Wander through the woods on foot or by bicycle.

Teufelsberg is a man-made hill above the woodland. It was created by the Allies after World War II from the city’s rubble.

There’s a lot to see in this big and spread-out city, full of optimism and energy. The best way to take in its many scattered attractions is to buy the Berlin WelcomeCard, which gives free travel with all public transport for 48 hours, 72 hours or 5 days, and reductions of between 25% and 50% on 200 tourist and cultural highlights.

For the best overview of the city, I took the exhilarating trip in Europe’s fastest elevator to the top of Kollhoff Tower on Potsdamer Platz, for the views from Panoramapunkt.

One of the worlds great beauties has a splendid new home. In 2009 the bust of Nefertiti was given a room of her own, with lighting fit for the superstar she is, in the city’s New Museum. This piece of classical magnificence dates from 1830. It was refashioned by British designer David Copperfield, after wartime damage and years of East German neglect.

The Egyptian queen is one of many fine things in the five separate collections on Museum Island (together they form a UNESCO World Cultural Heritage site).The Pergamon Museum houses a partial recreation of the astounding Great Altar, excavated at Pergamon in Turkey and reconstructed here. Another showpiece on Museum Island is a recreation of the Ishtar Gate of Babylon and the great Roman Gate of Miletus.

One hot ticket is any concert in the illustrious Philharmonie concert hall by the great Berlin Philharmonic, with British conductor Sir Simon Rattle in charge. Watch www.berliner-philharmoniker.de like a hawk, because they always sell out.

There’s more room in the Waldbühne, the Forest Theatre, venue for the orchestra’s big midsummer concert. The city’s top musical performers give free lunchtime concerts in the Philharmonie foyer. The Staatsoper on Unter den Linden is one of the world’s great opera houses. www.staatsoper-berlin.de.

Since the Wall came down, Berlin has been an exhilarating blank canvas for architects and designers. So much space to build on; so many grey old buildings to adapt to bright new use. There are new shops all over (the smartest areas are Kurfürstendamm and Friedrichstrasse), clubs, bars, restaurants and a clutch of new hotels.

Among the boutique hotels is Casa Camper, run by — of all people — the smart Spanish shoe company Camper.  I single it out because I like their shoes, but also because it offers bicycles, personalized city maps, and — this really is smart – free 24 hour Tentempié.  The word means “snack”, but there’s much more to it. They replace the minibar, with all those overpriced drinks and nuts, with a free 24 hour buffet on the top floor, views over the city. www.casacamper.com/berlin

The Mall of Berlin in the city center, which will become Germany’s largest shopping center in 2015, opened in September 2014 on the site of the former Wertheim department store, near Potsdamer Platz.