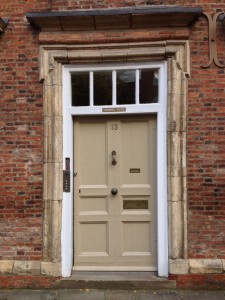 Old York door – there’ll soon be an app for it

Could the guidebook and the tourist leaflet become obsolete, before too long, at least in town and city centres? Using ubiquitous, and free, Wi-Fi, tourists may never again need to look up the height of that steeple, the age of that ancient market cross, the architect of that building. That’s the reality in York.

And for an additional overview the city has become one of the first to have its prime tourist attractions filmed by a drone,  with the videos to be made available online shortly.

In the summer of 2014 the entire city centre was connected to free Wi-Fi. York has become one of the first places in Britain where anyone armed with a suitable smartphone or tablet may plot a well-informed course around its historic features, using various apps tourist board and city attractions have created.

I particularly like this, just one example of the ways in which portable wireless devices improve the discerning visitor’s experience. It’s easy enough to pick out the massive York Minster, just by raising your eyes. But what about all those quiet little churches, scattered around like dim stars on the edge of the galaxy? Many of these fascinating but little-known buildings are easily missed without some hard searching in the city’s complicated inner maze of narrow mediaeval streets.

The York Churches app shows their locations on a GPS map. It provides information on their history, internal features and their current life.

York is one of the first places to benefit from the government’s Super Connected Cities programme which is bringing free public WiFi to 22 UK cities. (Other cities include Birmingham, Bradford,  Aberdeen and Edinburgh.)

The drone is another piece of technology York is using to promote itself. That ultimate symbol of inch-perfect, remote control killing, directed by distant anonymous operatives, has developed into the most useful little flying machine a tourist board could hope to hire.

Some of the first images of a city’s most striking tourist attractions were captured this month (November 2014) from cameras fitted to the small, highly manoeuvrable aerial vehicle.

Four ninety second videos will be available online, showing York Minster, the City Walls and the Museum Gardens. The drone, running on quiet, zero emissions electric motors, was able to work in the confined spaces no other flying machine has ever visited.

This new aerial promotion of the city is part of York’s “First Time” marketing campaign. While many lesser cities would be content if tourists paid them only one visit in their lives, York knows that people will be back, and is seeking to start a relationship with that market segment.  (The city certainly has an enduring appeal. I can still remember my first visit of many, more than 40 years ago.)

York is very fortunate to have a central location on Britain’s train network, roughly halfway between London and Scotland and easily reached from the Midlands and the North West.

It has another publicity push, aimed at a target audience of people living on or near the East Coast Main Line between Edinburgh and London. There is a banner poster campaign on railway stations to draw them in, and then lure them back.