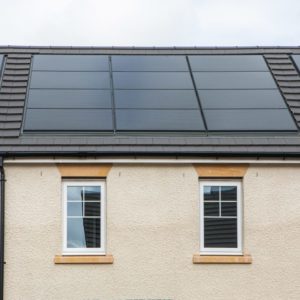 There were many articles last weekend marking the fifth anniversary of the Paris climate agreement. There is little more to be said on that we are the vital decade, on why we need to replicate the urgency of the COVID-19 vaccine developers, and how there is still hope if we really care and try.

The simple answer to the question: “What have we done to limit climate change since Paris?” is “Very little”. And that applies in the UK too, despite our boast about setting “world beating” reduction targets. We cannot even meet our own targets.

Instead I tried to discover what action on climate change actually looks like. Is it reducible to a conspicuous project in your own neighbourhood, to which people could actually relate?

That rules out giant wind turbines in the North Sea or Irish Sea, significant though they are – a single rotation of the biggest blades can power the average house for a day. Or the latest electric car you see passing, still beyond the budget of many people. Or arresting zero emissions projects such as this hotel in Scandinavia.

Then I came across a plan to put solar panels on 650 roofs on a housing estate in Swansea. I had found the perfect scheme, demonstrating how mainstream renewable energy technology brings clear, everyday benefits to people and the planet.

Until now anyone with solar panels on their roofs – I include myself – fell into the category of what the Prime Minister might describe as “eco-zealots”. (The same applied to people driving electric cars.) This is an important point. Our solar example did not catch on, although the government eliminating subsidies was probably the main reason for the lack of take up. It is now clear that action to meet Co2 reduction targets has to come from governments, public bodies and industry. The task is too huge to be left to individuals.

The scheme on the Penderry estate in the west of Swansea is thought to be the biggest renewable energy retrofitting project in the UK.  Ironically it is supported by £3.5m from the European Regional Development Fund (ERDF), via the Welsh government.

The housing association properties, in the Penderry Ward of the city, are owned and managed by Pobl, Wales’ largest provider of affordable housing. They are projected to be able to generate up to 60% of their own electricity, bringing handsome reductions to electricity bills.

‘Spinning wind turbines in the N Sea represents action on climate change, certainly, but nothing like the impact of panels on 650 roofs, with much lower bills bouncing on doormats, and people talking about it at the school gate, in the corner shop and in the pub.’

Batteries will be installed in homes, allowing tenants to harness power generated from the solar panels on their roofs, and store it for later use by the entire community. Sharing energy this way means that homes that do not receive as much sunlight will not be disadvantaged. Every home will be fitted with a smart thermostat and intelligent heating control, managed through an app. Work on the scheme, to be delivered in collaboration with renewable energy supplier Sero, will begin early in 2021.

Renewable energy has been mainstream in the UK and other countries for several years, but I doubt if the person in the street paid the statistics much heed – the fact that more than half our energy on certain sunny, windy days in the summer comes from wind turbines and solar panels, and that the price of both technologies has plummeted in 10 years, to reach rates few predicted. Spinning wind turbines in the N Sea represents action on climate change, certainly, but nothing like the impact of panels on 650 roofs, with much lower bills bouncing on doormats, and people talking about it at the school gate, in the corner shop and in the pub.

Lessons from the Penderry estate project could inform how energy efficiency technology is fitted to a further 10,000 new and existing homes in South Wales. The homes would become “mini power stations”, an initiative of the Swansea Bay City Region, equipped with green technology such as heat pumps and Tesla batteries.