I try hard not to look at YouTube, and other video content on the web to the course of a working day. 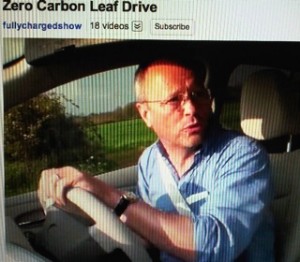 It’s distracting, and I find it a slow way to gather information. But just occasionally I see something quite compelling, that informs me in a way that written material cannot.

I followed a Twitter link to a sequence the actor and presenter Robert Llewellyn (best known as Kryten in in Red Dwarf) filmed for his video blog Fully Charged a few days ago.

It shows him driving a Nissan Leaf, which he has on extended loan from the company, from his home somewhere in middle England, through the Cotswolds.

He has to travel around 60 miles for a particular purpose, and although the car distance monitor promises him over 90 miles he does admit to some “range anxiety”. This is one of the principal reasons people give for not turning to electric cars (EVs), the fear that the electric car will run out of juice miles from a charging point. The early reports from drivers of the first Nissan Leafs delivered within the UK suggest

As Llewellyn drives along through the luscious Cotswolds countryside–we can see the dry stone walls, and the sweep of green fields in the background–he talks about the attributes of a car, which, he notes surprisingly, “I can drive it wicked fast”–. The monitor keeps giving him erratic predictions of range: for example, range falls significantly when he’s driving up hills, then magically turns optimistic as it is coasting downhill.

The purpose of his trip is to visit the Watermill at Tellisford, in Somerset. This was set up a few years ago, harnessing the water  on the River Frome., to produce enough carbon zero energy to power enough to power 67 homes. homes.

Llewellyn doesn’t tell us how long he stayed, although he enthuses about the tea and cake they served him, but we assume it’s some hours. It certainly still light when he set off home, and this is when he’s really excited. He has recharged his car using zero carbon energy, from “rainwater running of the hills of Somerset”.. Some estimates, he says, suggest that rivers could power 2 million homes in the UK.

He now has 93 miles of battery to get him home – “I’m so proud, it’s a privilege, no CO2 was released in creating the energy for the driving I’m doing now.”

Llewellyn, it should be pointed out, is a strong advocate for electric cars. So this is hardly an impartial account. The item is short on and some details–for instance, how long it took to charge the car. He is clearly already very impressed with the vehicle, which he refers to as a good family car, easy and fun to drive, and to drive fast. But it’s not cheap, at £25,000, even with a government subsidy. And this particular model, unless sales increase enormously, is likely to remain relatively high-priced, and beyond the range of many buyers for years to come.

However we are at the very start of what some commentators referring to an electric car revolution, and within five and certainly 10 years the choice of good straightforward electric cars and affordable electric cars is likely to grow significantly.

You can see Llywellyn’s short Carpool sequence on blip.tv, or by following this link, http://FullyCharged.blip.tv/file/5040116/ or  http://disq.us/1q3f7z