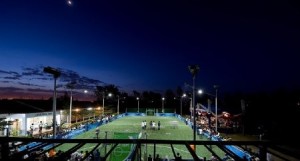 The night is bright–football when it's comfortable to play

Young men in Africa who take part in football must, by and large, do it during the day, when the sun is very hot and the light is harsh.  And that’s how it’s always been. Never since the introduction of the game on the continent have they had the option of playing when it’s more sensible, in the cool of the night – unless they happen to perform  at a  high, professional level, in a league where clubs can afford floodlights.

But could the very thing, the sun, that causes them such discomfort during the day, be the answer to playing at night?  In a pioneer scheme, solar  energy is  providing  free  illumination in disadvantaged communities that would never otherwise aspire to the sort of facilities taken for granted by young people in the West.

This spring (2011) the first solar powered floodlighting scheme was inaugurated at a stadium in Mathare, a poor community on the edge of  Nairobi in Kenya, under the “20 Centres for 2010” programme which  came out of the 2010 FIFA World Cup  in South Africa.

The solar panels, donated by Chinese manufacturer Yingli Green Energy, will provide about 1000 hours   of  floodlighting  in a year,  between three and four hours each night. A similar scheme is underway, under the same program, in Rwanda that will also see solar panels fitted to a stadium.

The solar-charged facilities will have an additional social benefit,   that of taking bored young men off  dark streets  at night, and giving them a purpose. The full remit of the centres is to  “address local social challenges in disadvantaged areas and improve education and health services for young people.”

Until now the advance of solar power has  mainly benefited comfortably-off homeowners  in the  western world, who can afford the initial high cost of  installing panels  on their roofs to generate electricity,  and businesses, corporations and  public sector  organisations who fit  the systems onto their buildings. And while the scheme at Mathare depends on the  generosity of corporate benefactors,  it still costs  considerably less than linking conventional floodlights to  expensive, and uncertain, energy in the grid.

African countries have already demonstrated that they can leapfrog  conventional technological advance, for instance through the widespread use of mobile phones  (instead of landlines, supported by a costly and cumbersome infrastructure) to  communicate,  do business and even  transfer  money and pay bills.

Could the “20 Centres for 2010” scheme  be an early part of  a revolution in the use of  solar power in Africa,   in which  governments will be able to   to dispense with the need to build and develop an expensive national grid based on conventional sources of energy?