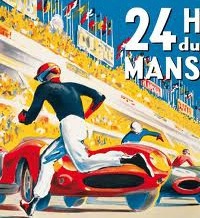 Le Mans is  synonymous with the annual motorsport marathon, the Le Mans 24 Hours, the “Grand Prix of Endurance and Efficiency”. But the city is more than a long weekend destination for petrolheads. Le Mans is now an easy short break trip by train from London St Pancras. In 2010 I spent a day in one of France’s too-long overlooked old cities. My must-do list includes a mighty chunk of Roman wall, a thrilling night time light show, the tomb of Richard the Lionheart’s queen, and a very special tea room.

Le Mans’ Roman Wall is a sensation. Among city fortifications of the time, only Rome’s and Istanbul’s are bigger.  About 1300 yards of it, studded with 12 towers, wraps around the immaculately preserved and restored Plantagenet Old City. This is a maze of narrow cobbled ways, overhung with 14th century timber-framed houses, repainted in mediaeval hues of blue, lavender, green and red. There are tantalising glimpses of select mediaeval mansions behind walls and gates. It’s short stroll to the sleek new Archaeology Museum, (opened in 2009), and the Musée de Tessé, a fine art museum with a three-dimensional facsimile of an Egyptian tomb.  Then on to the new city centre, where trams gently swish down wide boulevards, planted with bowling green lawns to absorb the sound.

The formidable, 1000 year old St Julian’s Cathedral is one of France’s elite religious monuments. Henry II of England was baptised here. And Berengaria, the abandoned wife of Richard the Lionheart, who lived in sad separation in Le Mans, is buried here. Key features include a daring set of flying buttresses, and mid-C13th stained-glass windows, among the earliest of all. One “heavenly’ item is a recently restored 14th century fresco depicting 47 angelic musicians in vibrant colours. This masterpiece of Gothic art is a rare display of instruments of the time: one is an intriguing long-extinct cross between a chess board and harp. The angels give a virtual concert, projected onto the porch of the cathedral, in the summer nights’ light show.

If you thought the British held the monopoly of devotion to the humble tea leaf, consider the quite crazy mission of designer Jean-Pierre Guilbert and his wife Élisabeth  No, they resolved, Pilier-aux-Lumières, a 14th century timber-framed building, totally tumbledown since before the last war, should not be allowed to crumble into dust. They spent a pot of money, restored the building and turned it into one of the most welcoming tearooms you could gratefully stagger up to in search of a cuppa after a hard day’s sightseeing. I sat outside, savouring the herbs and essences of the house tissane, and celebrated their triumph. (Place du Hallai. For dinner I recommend Fou du Roy, just another of the host of small, and not too expensive, family restaurants France does so well. (Impasse Impasse Ste Catherine, 0033 243 28 45 03.)

Round the clock appeal

Le Mans 24 hours is too good a brand name to use just once a year. So if you miss the famous endurance race for cars in July, there are more marathons on wheels to catch, although they don’t use the longer 9 mile course which takes in adjoining local roads. There’s a 24 hour classic cars race, a 24 hour truck contest, and even a 24 hours for cyclists. They do guided tours, and offer the chance to drive the inner circuits. It’s worth the visit for the museum alone – full of fabulous old cars, motor memorabilia, epic posters and photos of stirring races. (They should bring back the start where the drivers sprinted to their cars.) Just down the road is the excellent Chez Janine restaurant, Rue de Laigné (00 33 243 72 61 80), the racers’ and supporters’ very superior greasy spoon.

We’ve come a long way since the son et lumiere presentations they used to beam onto the side of a chateau, with ponderous commentary and marshmallow music. The La Nuit des Chimères light show, on summer nights in Le Mans, sets the standard for a new and sophisticated light show projected onto historic buildings. It’s sure to catch on. At a brisk trot you can just about catch all the presentations, at eight different locations, but it’s best to spread it over several nights. Rolling across the ancient bricks of the Roman walls is a display of Roman gymnasts and a battle with a dragon. The ghost of Berengaria appears at the Plantagenet Museum. She’s also in the 70 minute long Banquet of the Plantagenets, starring Queen Eleanor, Henry II and Richard, in the Academy Garden. Best of all is the titanic battle between heaven and hell playing out over the whole of the east end of the cathedral.

It’s bed and breakfast, but not as we know it. What would the landlady of my student digs have made of La demeure de Laclais, a restored 1700s three storey town house in the Old Town? It would be an insult to this precious historic area to put up a new hotel, but discreet little conversions like this are just the thing – a mix of contemporary and antique furniture, authentic materials and soft colours. I stayed in the top floor Berengere Suite. From my sitting room I looked out over a wide square to the cathedral directly opposite. My bedroom had an old-fashioned raised bath, and my own private balcony, with views out into the countryside of Sarthe.
0033 243 81 91 78.

The writer travelled by train.