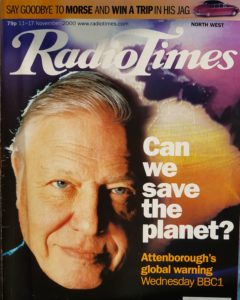 A chilling 2020 documentary on the state of the planet’s biodiversity  A call to urgent action, surely. So why didn’t we heed it 20 years ago?

“The future of the earth is in the balance. It’s up to us – who else?”

Sir David Attenborough, with his unique authority, addresses the camera. His analysis is chillingly succinct. Mankind is just too recklessly successful. Too many people, taking more from the world in energy and resources than it can afford to give. “We are polluting our environment, depleting its natural habitats, altering its climate.”

There is no big fix. “All I can say is it involves everything we do – permanently, forever. How much energy you use in your car, where the wood comes from in the furniture in your house. It is about what the World Bank is doing, what political party you vote for. In the end it’s a kind of morality, a conservation morality that is required.”

Sounds familiar. You probably think you remember it from the soundtrack from Attenborough’s harrowing BBC documentary on global biodiversity loss, Extinction: The Facts, last September (2020). If you could bear to watch.

But you would be wrong. That commentary is much, much older. Attenborough delivered it in a three part documentary, State of the Planet, in 2000, to mark the new millennium.

“This subject matters enormously” producer Rupert Barrington told me for my article in Radio Times at the time. “You’re not going to be told about it in any clearer voice then David Attenborough’s” 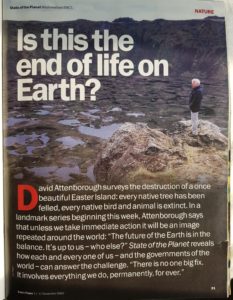 Somewhat apocalyptic intro to my piece in Radio Times. Not my headline, but the Easter Island metaphor was appropriate

As a population we cranked up the action. But it wasn’t enough. Chemicals we don’t even know the names of are still sprayed on the fields all about us. Fossil fuel companies desperate to protect their businesses continued to lobby government ministers and were, and are still, rewarded with tax breaks. Newspapers cast doubt on climate change, or harried campaigners who called for action. They still do.

Governments anxiously eyed the next set of polls and played it safe. As recently as the U.K.’s general election in 2019 the environment barely featured in the campaign.

Now, in his 10th decade, Attenborough is back, once again outlining our predicament with devastating frankness. Now will we listen?

Because the inconvenient truth is that if we don’t heed Attenborough’s message, who will we listen to? There really isn’t anyone else in the world – not the Dalai llama, not the Pope – of sufficient stature to deliver this message.

There has to be hope. Attenborough’s final rousing appeal for us all, in the 2020 documentary, although it could equally well have been in the 2000 one, is to fight for a “better future”.

People power, responding to this call, is certainly a force to be reckoned with. A 16 -year-old Swedish girl roused an entire generation to action, and rattled the establishment. Supermarkets are tripping over each other to phase out plastics. There is more promise in rewilding.

But campaigns and demonstrations can only achieve so much. Fossil fuel companies, fearful of the decline in demand for oil, now propose to increase plastic production.  And the British public’s response to the relaxation of Covid-19 restrictions, fearful of public transport, seems to be to drive even more than they used to.

Ultimately only governments can get us out of this mess. Forget those two week international gravy-train conferences – although that is a habit surprisingly easily broken this year. World leaders must prime their translators, start up Zoom or Microsoft Teams and get talking. Nothing else will work. 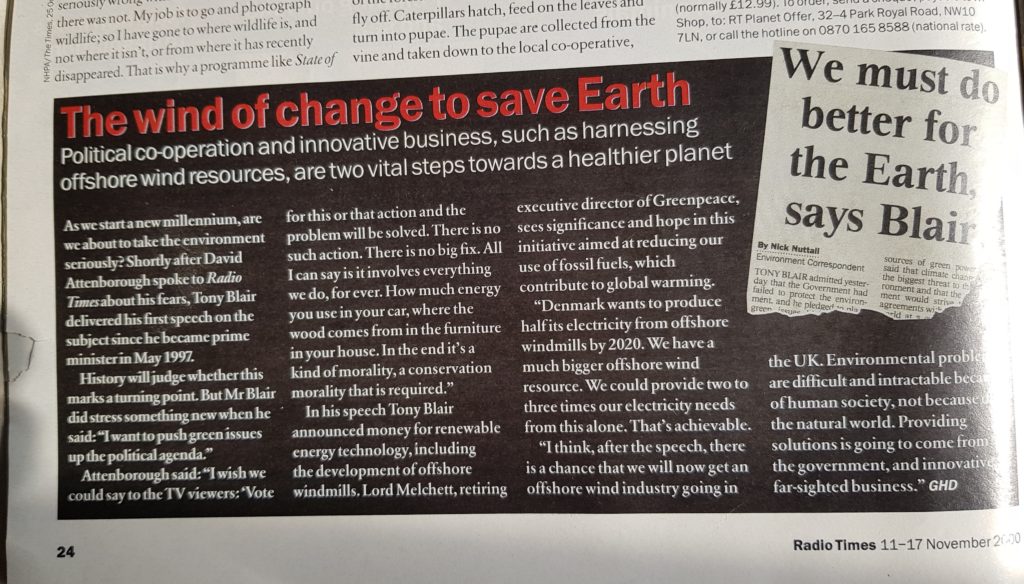 Postscript to my Radio Times article. Tony Blair would be in power for another seven years. There were some modest advances. Then came the Crash of 2008. Another excuse for inaction.