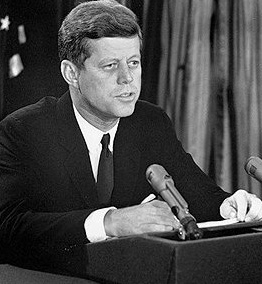 50 years ago today President Kennedy had a cold, or more precisely an “upper respiratory infection.” We soon knew that wasn’t true. It was a “diplomatic cold”, an excuse to cancel engagements so he could attend to the greatest and most pressing International crisis the modern world had known.

That night, October 22, 1962, he addressed the nation, and the world, on the threat posed to the USA by the missiles which the Soviet Union was installing on Cuba, 90 miles off the American coast. He announced a naval embargo, to stop Russian ships carrying any more missiles and armaments to the island.

That was the start of the Cuban Missile Crisis, and it was a very fearful time. Over the next six days people had a justified dread that nuclear war would erupt between the USA and the USSR.

So how does the threat of global warming compare with that crisis, and is it even worthy of a comparison? Then it was the prospect of two superpowers pulverizing each other’s cities with nuclear weapons.

Today it is the still uncertain prospect of rising temperatures causing problems that are hard to exactly quantify for future generations.

In 1962 we were not even sure we would last until the end of the week. They were tense days indeed, I remember an excited clamour in the school playground on Tuesday morning, then gallows humour about what people would do during the four minute warning, then a feeling of denial and detachment as if it wasn’t anything to do with us.

It very much was. If Russia had attacked the USA because one of its ships was halted on the high seas, retaliation would have been total and from all quarters. And that would’ve been the end of everything. Surviving would have been as bad as being obliterated.

People were strangely calm. This was partly due to the way we consumed news in those days. The daily papers were full of the crisis. But there was a big gap before the next instalment of news. TV and radio bulletins were spaced out, with several hours of calming TV in between, unless that was a newsflash. I’ve no doubt that today’s rolling news and saturation coverage would have stoked considerable hysteria.

After six tightrope-walking days days, on the Sunday morning (October 28) we heard that the crisis was suddenly over. President Kennedy announced that he had received a letter from USSR Chairman Khrushchev stating that Russia would remove all its missiles from Cuba within 30 days. (At the same time the USA had secretly agreed to remove Russia-facing missiles from Turkey.)

The view of most scientists working in the field of climate is that we now face a crisis of similar scale, even if events are moving with infinitely less tension, and at a fraction of the speed of 1962. Yet there has not been, and may not be, the equivalent of Kennedy’s grave speech. The conviction that something very serious is going on here is shared neither by the general public, nor, more crucially, by the world’s politicians. And that despite the fact that it’s so much easier now for people to inform themselves about the challenge we face.

Now, unlike 1962, we do have rolling news, we do have saturation coverage and we have instant updates. You could, if you wanted, read many fresh insights into climate change every day of the week. Then, too, you could read a fair few articles suggesting it isn’t happening.

Nobody doubted that six-day crisis in 1962. A significant minority believes climate change either is not happening, or if it is happening it is only partly man-made, or not man-made at all and it’s all down to metrological phases. Others say even if it is happening it would be too expensive to take action.

Scientists, while saying global warming is happening and it is man-made, hold out hope that mitigating action, if taken soon enough, could at least slow climate change, but the critical window of opportunity is in the period between now and 2020.

There are many calls for urgent action. At the same time, as in that crisis of 50 years ago, there is a strange response of not discussing climate change, as if by not talking about it maybe it will go away.

After years of extreme weather, we’ve had even more extremes this year, 2012. Early and extended heatwaves in the USA, and unprecedented melting of the Arctic ice cap. These things are reported in the UK, but they are not the issues our media is concentrating on at present. Since the Olympics, a justifiable excuse of turning away from bad news, newspapers and radio and TV bulletins have been dominated by just a few events. One of them was the long saga of the resignation of a government minister after his verbal altercation with police at the bottom of Downing Street.

I’m a regular listener to BBC Radio 5 in the mornings, and I cannot remember a single mention of the melting of the Arctic ice cap, and the possibility that it might disappear altogether in the summer within five years, since the extent of this potential catastrophe was known in the summer.

We hear a lot about the UK’s extreme weather this summer, the wettest in 100 years, and the following  very wet autumn. Rarely is climate change mentioned as a possible cause, even to give experts the opportunity to dismiss that link, because not everything is global warming-related, and our weather is perfectly capable of misbehaving under its own volition.

It’s a different sort of crisis. Very slow moving, and, most of the time quite undramatic. When did it last feel this mild/cold for October/November? When was a football match last called off in Warsaw because of the rain? Aren’t they just things that happen? Isn’t it too soon to say?

And this is how we will probably carry on, moving from unusual and sometimes extreme weather to the quiet periods in between that suggest  that nothing is really changing, this is how British weather is. Take today, a dull, misty, dank, dreary, windless October morning. What’s so unusual about that?

Nothing much is happening in the weather so maybe we need not worry about climate change today. It would probably be the same tomorrow and for a succession of quiet, misty, dank, grey days. Typical British weather, they will say in the bus queue. Even if it feels different, can you be sure that it wasn’t just as dry 10 years ago or whether it rained just as hard 20 years ago or if we had such sharp frosts in September 40 years ago?

It’s not quite serious enough, is it? And if it snows again this winter, doesn’t that mean that global warming is stopped, and is even in reverse? Those scientists – what do they know?

Yet those scientists are in no doubt that there is more extreme weather now, and the gaps between extreme events are shorter. They say this is consistent with the projected effects of global warming.

So we muddle through a few more months of this very quiet crisis, and our government, which contains cabinet members who are still at least lukewarm about climate change, and other governments in Europe still don’t see it as an important enough to take decisive action at the next climate change talks, to at least mitigate its effects.

The only good news is that there will be big technological progress. The price of solar panels has fallen by 65% in a little over 18 months. An installation for the average household roof that cost £11,000 a year ago, now costs £7000 or under. And that’s essentially the same technology as 2010 and earlier. There is a buzz in the research labs of universities and start-up companiesa round the world. Electric cars do work, and for those many who are unconvinced, the range extender car allows you to do 2000 miles on a tank of petrol. I firmly believe that smart solutions to significantly reduce our take of carbon-based energy (CO2) will be available in the next 10 or 15 years.

Will it be enough to slow climate change, without strong political action, or buy us time time so that even more impressive technology can be developed to reduce its impact? It’s possible, but we shouldn’t rely on it.

In that week in 1962 few people would have bet on us still being here in 50 years, or avoiding some subsequent nuclear conflict even if we survived Cuba. Wise counsels did prevailing, and the prospect of all-out nuclear war, as opposed to limited nuclear strikes, seems very unlikely.

This is a different sort of crisis. If you could look back from 2062, you would probably find that not too many people would have died from global warming, at least in Britain. There will be casualties from floods, and high wind, and heatwaves. There will be higher prices and shortages through drought and rain at the wrong time. But will they be enough to make us snap into action?

The crisis of 1962, which could have resulted in the sudden death of many millions of people, and a barren, blasted future for millions more, was over in six days. The crisis of 2012 has many years to run. Let us at least recognize it for what it is.