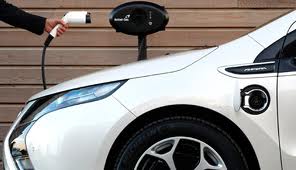 The Vauxhall Ampera with a charger, not a hairdryer. But owners have more time to wash it, as they won’t be calling at petrol stations so much

So, you have £29,995  to spend on a nice new car, or your firm is doing it for you and letting you make the choice. You think about going green. But you don’t want a model that would draw disparaging glances from the Top Gear team, or their many supporters. So that rules out green?

Wrong. The Vauxhall Ampera is Top Gear’s “Green Car of the Year”. Top Gear magazine enthused: “The Ampera’s range-extender set-up is currently the most realistic of all green-car tech. The future starts here…” (And now, with typical Top Gear chutzpah, they’ve gone and driven it through, yes through, the Channel Tunnel.)

More eulogies from Autocar on the electric family car, with a four-cylinder combustion engine for backup: “…like a vision of the future — only better. As an electric car that can be your only car, the Ampera has no peers.“

Top Gear drove one for a week. This was their verdict. “Plug it in overnight, giving you a pure-electric range of 50 miles. [Autocar estimated range at 33.4 miles.] Do this every day, and there may never be a need to visit a petrol station.”

Stop now. Did you read that right? Indeed you did. The car has only been out a few months, and already I’m picking up random tweets from owners in America (driving the Chevrolet Volt, its sister model) and the UK saying they haven’t put petrol in their car since the summer – that’s three or four months. If I had a Ampera instead of my present conventional car, on the journeys I’ve been making – that’s using our car pretty much every day – I would not have used petrol for the past four weeks.

Quentin Wilson wrote this in the Daily Mirror: “I’d say 2,000 miles on one tank of petrol is good going. That’s what I squeezed out of the clever Ampera.

Top Gear point out that the car is a range-extender, not a hybrid. “The front wheels are driven 100 per cent of the time by an electric motor, powered by batteries or a 1.4-litre petrol engine.”

This is how it works. Drivers charge the battery overnight at home – six hours to charge from a 13A domestic socket. Top up or recharge at your place of work or the shopping centre or wherever, or, if you’ve got enough battery to get home, then repeat the process overnight.

GM says that this range could satisfy the daily commuting needs of between 80 and 85 per cent of the western motoring population without using any petrol at all. In the UK Vauxhall claims the cost of recharging the battery is, on average, about £1.

When the battery is depleted to 22 per cent charge, the car enters range-extender mode. The petrol engine supplies the energy. It works as a petrol generator driving the motor, not the wheels. In this mode the car can drive for up to 310 miles, on petrol in a 35-litre tank. And that is range anxiety banished.

Those notoriously hard driving Top Gear people still managed 99mpg over 170 miles, “driving quite aggressively on a mixture of roads; [that figure]  assimilates the volume of fuel used plus the amount of battery drained….”

For an account of how a Top Gear journalist actually drove an Ampera through the Channel Tunnel, on battery power alone for over 60 miles) read here. (They used the servuce tunnel, which has a road.)

Vauxhall claims better than 300mpg for the Ampera in urban use. It also claims a maximum cruising range, with that petrol engine, of more than 300 miles.

In the Autocar article, the combined MPG is given as 235.4mpg (and several owners have tweeted similar results) with a CO2 reading of 27g/km – vehicles under 100g/km are exempt from vehicle license duty and London congestion charge. The BMW 328i SE, at roughly the same price, is five times more polluting, with a Co2 reading of 159g/km, returning 41.5 mpg.

Autocar’s testers managed 54.2mpg over six days in the Ampera, “but we drove it far and often, and our testers did not all have the same access to recharging points.”

Quentin Wilson managed to get “a stunning average of 193mpg, by driving as much as possible on battery alone and using the little 1.4 engine only in emergencies.

“The Ampera is one of the best cars Vauxhall has ever made. Handsome, smooth, distinctive and ­refined, it’s also one of the most usable green cars out there – the reason why it’s won a slew of awards.

Top Gear concluded: “..a far more realistic vision of an electric-car future. It eliminates the range anxiety felt with nearly every pure EV. It feels so genuinely usable. And it feels like driving a normal car, albeit a very quiet one with a surprising turn of speed. Range-extenders? If they’re the future, we’re definitely on board.”

“Considering its game-changing tech, the Ampera’s hefty price tag doesn’t feel entirely unwarranted,” noted Autocar. “That GM has successfully landed its ambitious concept on the forecourt is laudable enough; that it has done so without costing the car beyond all reasonable means is little short of remarkable.”

Finally, Sunday Times Driving, the paper’s new motoring section has the Ampera winning its eco-car group by a clear margin.

“The Ampera offers excellent and silent performance and all-electric transport,’ said a spokesperson. ‘It’s a brilliant solution. The Ampera is also a great-looking car inside and out, comfortable on a long journey and easy to understand and operate.’

For a start, all public sector bodies that are buying cars for senior officers of that price bracket should not be looking at anything else particularly when you consider the relatively short urban journeys many public servants will be making, when they have the opportunity to use nothing but electric power.

It’s becoming clear that the Nissan Leaf and the other relatively short-range electric cars coming onto the market will not be the electric vehicles (EVs) to wean us off oil, at least until there is a significant change in battery technology. The Vauxhall Ampere just might.