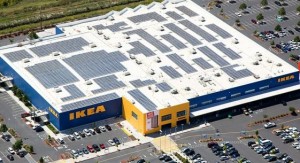 It’s what it says on the factory. IKEA, with solar panels.

Isn’t there something about the IKEA brand that we British don’t take entirely seriously? We are full of respect for John Lewis, and Fortnum and Masons and Harrods, but when we picture this jaunty Swedish furniture and household goods company I think many of us can’t resist a smile. At those funny (apparently) made up names for washing up brushes and placemats and spoons with holes in them. At those sunny yellow shirts all the staff wear. And that meatball-dominated menu fit for a Viking training camp.

Now, though, it’s time to take IKEA very seriously indeed. And not just us the customers. Some energy companies are about to lose some very significant business. And they will never get it back.

IKEA has just announced that it intends to become fully energy self-sufficient by 2020, generating power from its own solar panels and windfarms. Scale that down to consumer level, and it’s as if you or I said that within a few years we will make all our own food and we won’t have to shop in a supermarket ever again.

The international chain, which has 301 stores in 41 countries, aims to meet 70 per cent of its energy demand “from renewable energy [installations] we own and operate” within three years, with an investment of up to €1.5bn in solar and wind energy projects by 2015. In the five following years it intends to expand that figure to 100%.

The company has already installed 342,000 solar panels on its stores and other company buildings. Its energy generating base includes a 12.3 MW windfarm which it brought in Scotland in 2011.

IKEA sees this strategy as a way of protecting itself from spikes in energy prices and the likely introduction of carbon legislation worldwide. Owning its own renewable energy plants will give it complete price certainty. It believes it could even become a net energy exporter, selling its surplus to suppliers or customers.

“All our solar [installations] pay back in 10 years or less and will last for 20 years,” said a spokesman.

Inside its stores IKEA says it will replace 1.2 million lights with low energy consumption LEDs. It had already committed to selling only LED lights in stores from 2016. Replacing in-store lighting with LEDs would cut the company’s global energy bill by about 10 per cent and save around €15m a year, while also freeing up staff from having to more frequently replace halogen spotlights.

IKEA has committed to recycling 90 per cent of store waste and making its products more sustainable by ensuring all main home furnishing materials are renewable, recyclable or recycled. That includes packaging.

The company plans to use only cotton certified by the Better Cotton Initiative, which uses half the water and pesticides of most cotton production, and buy 10 million cubic metres of certified sustainable wood.

It’s not a surprise that the strategy was welcomed by environmental groups.

Mark Kenber, chief executive of The Climate Group, urged other businesses to follow IKEA’s lead and place sustainability at the heart of business planning.

I’ve seen no comment from the energy utilities. Hardly worth it, really. This is one customer they will have lost for good.