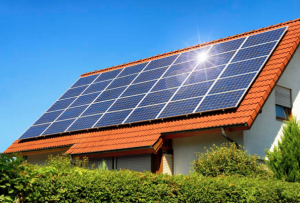 They are good on a roof, even better incorporated into a car

Could Lightyear, a solar power and electric car become the vehicle of choice in the 2020s? How a Dutch start-up is blazing the path towards low emission motoring.

In 2010 I wrote about the launch of the first mainstream all-electric car in the UK. The Nissan Leaf has sold well since then, but it and subsequent electric models still make up only a small percentage of the private cars on our roads. The number of electric vehicles in the UK has grown from 2,900 in 2011 to 133,670 in 2017.

Nissan have just released its latest Leaf, with twice the range – more than 150 miles between charges. And Elon Musk has developed an affordable Tesla capable of well over 200 miles on a single charge. He is building the car, but it remains to be seen if he can meet his bold targets.

The experts caution against us relying on technology to fix climate change. Making a serious dent in our consumption of petrol and diesel in the 2020s has to be part of the solution. And without a sudden shift in the public perception towards them, electric cars on their own are unlikely to make that happen, at least not in the coming decade.

What we need is radical blue sky, or should that be bright sun thinking? And we have exactly that, in the form of a startling ambition from a Dutch start-up which plans to build 100% solar powered electric car, the Lightyear.

In partnership with Dutch engineering company EDAG, it is designing a car that can drive up to 10,000 kilometres a year on the power of the Dutch sun. (That would be much the same for the UK and Germany, where solar levels are not much different, and probably a little better for Spain, France and Italy.) The first prototype is expected by early 2019, with production of the first series of solar cars in 2020.

If it sounds entirely fanciful, consider this. 10 years ago, in 2008, even the most committed renewable energy fan may have balked at the prospect that at times on summer days in 2018, the sun would be provided 40% of our energy needs. In late June PV (solar) generation in Great Britain exceeded 8 GW for 8 successive days. So solar cars, and in some numbers, on our roads by 2028? Don’t rule it out.

I expect most readers share my view of the solar car, as some low, slow and flimsy converted tricycle, every inch of it covered in solar panels, scooting 3000 km across the Australian Outback in the World Solar Challenge.

The first long distance solar car, The Quiet Achiever, crossed Australia in 1982 at an average speed of 23 km/h. Since then there has been a big advance in batteries and solar technology. A category of practical family cars was added to the World Solar Challenge in 2013, and the technology is now considered sufficiently mature for commercial solar cars to be a credible option.

Lightyear (the car takes its name from the combined distance all the world’s cars travel in the course of one year – one light year) started as a team project at the Eindhoven University of Technology. The team entered its cars, the ‘Stella’ and ‘Stella Lux’, in the 2012 and 2013 World Solar Challenges.

The start-up is now working on a commercial variant, ‘Lightyear One’, with the object of making electric driving available for people worldwide, no matter what level of charging infrastructure is available. In large parts of the world, Lightyear contends, there will be no need to wait for chargers to be installed. Solar-powered cars could be introduced wherever there is a good prospect of high levels of sunshine. And the battery would be able to hold enough charge to allow the car to be driven at night.

The car will be highly aerodynamic, and very light. The company says it has developed a solar-electric platform [with an] energy efficiency up to three times higher than current EVs in the market. It believes this efficiency, combined with its PV solar technology, makes a solar-electric car a viable solution. (The company’s website, having discovered where I live, estimated that, of my yearly usage, 40% would be covered by solar power with the first version of the car, Lightyear One.)

There are many spaces to be watched in the field of low energy driving these days. This is one of the most interesting.