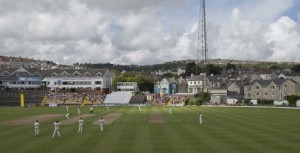 “There was never any certainty about the last ball. Indeed, the vast weight of cricket history, accumulated in so many dusty volumes, now bore down on Sobers, to say: ‘It won’t happen.’ The story of so many matches, where so many thousands of batsmen have played out so many thousands, even millions, of overs. The odds against this [sixth and last] ball going for six too were astronomical.”

On August 29, 2013 Australian cricketer Aaron Finch beat the world record in Twenty20 internationals with a score of 156 off 63 balls in a game against England. It was a mighty knock, but the sort of knock we are now coming to expect.

The opener hit 14 sixes and 11 fours.  As the BBC correspondent inelegantly described it: on his way to his century he “clubbed three successive maximums.”

Twenty20 crowds expect to see sixes – I do hope that awful “maximums” doesn’t catch on – and lots of them. It’s as if you’re watching a fly-fishing competition on what used to be a drowsy Hampshire chalk stream, which is now crowded with people expecting the angler to be reeling in a great fat trout every few minutes.

Imagine, then, a time, long before today’s explosive brutality when this wasn’t so, when, as  Barney Ronay wrote in The Guardian (8th May, 2010) “People just didn’t hit sixes very often. In England hitting a six was even rather despised, a symptom of a kind of flaky foreign‑accented excitability.”

That was the level of expectation at St Helen’s cricket ground, Swansea, 50 years ago, August 31, 1968. Glamorgan was playing Nottinghamshire. It was long before of the frantic slog of Twenty20 cricket, when the game proceeded at a gentle rhythm, the draw was a standard result, and the ball cleared the boundary rope without bouncing far less often than it does today.

I was in the crowd that day. Without any warning we witnessed cricket’s perfect storm. Almost as if he just felt like it, the greatest cricketer of his day hit all six balls in an over for six. It had never been done before.

You can see the over for yourself on YouTube. I’ve written about it here.  People like to note that the ground is rather small at Swansea, and the boundary over which Sobers hit most of the 6s was quite near. (Even so, you still didn’t see that many sixes there in those days.) But other cricketers had played on similarly proportioned grounds in the history of the game, and nobody had achieved this feat. (And they done so in the subsequent 50 years too, and only a handful of players have since managed it.)

That’s all they can say, by way of deflating the achievement. Well, there is the small matter of the bowler Nash, using an experimental style. He was still a very good bowler, however. But there was no suggestion that Nash (for Glamorgan) had  been told to “feed” runs to Sobers, to tempt him into an early declaration. (Sobers was captain of Notts).

The over had followed the correct dramatic course, with a late twist before the triumphant conclusion. On the fifth ball it seems that our hero was out, caught on the boundary. The catcher, Roger Davis, fell over the ropes as he took the ball and the umpire correctly declared Sobers not out.

“However, in giving the other side a chance, Sobers had revealed himself as the fallible hero. That mistake had evened things up. So there was never any certainty about the last ball. Indeed, the vast weight of cricket history, accumulated in so many dusty volumes, now bore down on Sobers, to say: ‘It won’t happen.’ The story of so many matches, where so many thousands of batsmen have played out so many thousands, even millions, of overs. The odds against this [sixth and last] ball going for six too were astronomical.

“Captain Tony Lewis sent all his fielders to the boundary, most of them on Sobers’ leg side. Glamorgan wicket-keeper Eifion Jones is said to have challenged Sobers: ‘Bet you can’t hit this one for six as well.’ In ran Nash. All he had to do was put it on a spot where Sobers couldn’t hit it, or at least pitch it up so he couldn’t unleash that deadly swing.

“If only it was as easy to keep yourself out of the history books in the presence of greatness. For the first time in the over Sobers seemed to be really trying.”

Sobers writes in his autobiography: ”All sorts of things were going through my mind. If he bowled a no ball or wide, that would make it difficult because it would require a seventh ball. [It would not then be six off six.] I felt sure he would try to deceive me, [him] being a former fast bowler I thought he would run up as if to bowl another off-break and then bowl a straight, faster ball.

In a microsecond his brain had processed the delivery, and the instant it bounced his bat was describing a glorious arc over his right shoulder. If they ever recreate the over in a movie, don’t let the director slow this sequence down. The drama is the speed. In a heartbeat, the ball was over the boundary above our heads, still rising.

“Even if I had a top edge it would have have gone for six, but I caught it right in the middle of the bat and not only did it clear the short boundary, but it went over the stand as well running, down the hill towards Swansea town centre.”

We will forgive him the exaggeration of those last ten words. There is hardly a hill, for a start.

“All the way to Swansea” confirmed [TV commentator] Wilf Wooller (more understandable excess) in his television commentary. In another sense, though, the ball went further still. Right around the world.

So many remarkable, frantic, tragic, heroic things happened in ’68 – the assassinations of Bobby Kennedy and Martin Luther King, the invasion of Czechoslovakia, the first Moon fly past – so why shouldn’t the greatest cricket player smash a record. It was part of the iconoclasm.

My book on Sobers’ six sixes: Sobers six hit perfection at Swansea: That was the Day [Kindle Edition]