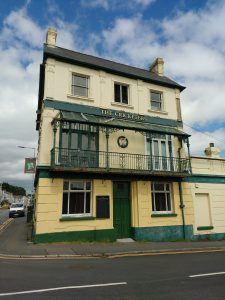 The Cricketers pub, just outside the St Helen’s ground, Swansea. Several balls struck by Sobers whizzed close to this pub in 1968.

This is the first of a number of extracts I shall be publishing in August in the lead up to the 50th anniversary of the day, Saturday, August 30, when Garfield Sobers became the first player in the history of cricket to hit every ball of an over for six. It’s taken from my e-book Sobers six hit perfection at Swansea: That was the Day

Scene: a street in Swansea on a quiet Saturday afternoon in 1968.

You rarely see cricket balls bouncing in the road. Not as unlikely as a meteorite landing in the desert, but, for an object out of its normal environment, it is not so far short, on the level of improbability, of ice skaters pirouetting on grass.

So when a hard, red sphere, weighing five ounces, came fizzing and spinning to a halt in St Helen’s Avenue, Swansea at around 5 o’clock on Saturday, August 31st, any passer-by would have first been startled, then relieved not to have been injured, then puzzled.

The rational observer would have quickly eliminated the possibility of mischievous aliens aiming familiar objects at Earthlings, in favour of someone having hit the ball out of the nearby St Helens cricket ground, a distance of more than 100 metres. The ball has often been struck hard at this famous stadium, but to launch it over the East Terrace and clean out of the ground would have been quite a feat.

If the hit itself, to land the ball this far from the wicket, was as improbable as summer snow, the full sequence of play, of which it was the culminating episode, passed straight into sporting legend.

Let’s loiter outside the ground a little longer, near The Cricketers pub, which features in one of Dylan Thomas’s short stories, and introduce Pontardawe schoolboy Richard Lewis. Now the speculation about the innocent bystander above is no more than that. It seems nobody saw the ball land or bounce. It was Lewis (who was to become a history teacher in Birmingham) who searched for it as he was leaving the ground “on his way home to tea” in one writer’s endearingly old-fashioned turn of phrase. He found it in the gutter.

Lewis’s honesty deserves more than a mere footnote in this epic tale. He could have pocketed his trophy and walked away into obscurity, whistling innocently, as boys do. Instead he took the path of righteousness – this was, after all, in the shadow of several large chapels – and handed it in later, thereby earning himself an honourable supporting role in one of the most famous events in sporting history.

Sport is a fantasy, a suspension of normal life in an enclosed space, shared by like-minded people. The more intense the mood is inside the ground, the more prosaic and humdrum, by contrast, is the everyday life that continues in the streets around – or so the spectators might conclude. Only in fiction – the final scene in Bizet’s Carmen, outside the bullfight stadium, is the best example – is there drama without to match or even exceed what is happening within.

To spectators arriving late, or leaving early, the sudden roar of 30,000 people at a cricket ground is an agony: it could mean a brilliant catch, an imperious drive for four, a menacing batsman clean bowled for 99. It could mean lots of things, all of which you would rather not have missed.

The day not to be outside a ground was August 14, 1948. A sudden volcano of sound from the Oval test match signified Australian batsman Bradman was out for a duck, bowled second ball by Eric Hollies, in his last test match in England. Bradman had needed only four runs to average exactly 100 in Test cricket. He would never achieve that.

Another place not to have been outside was Headingley on 5 June 1952, when Fred Trueman made a dramatic impact on his first appearance against India. “After 14 balls of India’s second innings, the scoreboard read 0-4, three of the wickets to the dashing tearaway” Wisden noted.

But there was no great crescendo from the few thousand spectators inside St Helens cricket ground in Swansea that afternoon, only an admiring susurration (in the days before ritual standing ovations were offered, as they are today for any routine achievement), tinged with utter disbelief.

I know because I was there, sitting on the east terraces with my father.