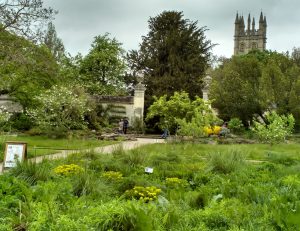 Oxford Botanic Gardens, May 2016. Photo by the writer

Three Daughters of Eve, written by Elif Şafak, is set in Oxford and Istanbul and focusses on three Muslim women, several men, and one big question.

Ron Charles wrote this in his notice in the Washington Post:
Elif Shafak’s new novel reveals such a timely confluence of today’s issues that it seems almost clairvoyant. Sexual harassment, Islamist terrorism, the rising tension between the faithful and the secular, and the gaping chasm between the rich and the poor — all play out in the pages of “Three Daughters of Eve.”

Apart from London, I don’t think there is a city in the UK with more literary and broadcast media connections than Oxford. (I’m puzzled why rival university city Cambridge has so few books written about it, or set in it.)

So many books and TV series have been set in Oxford, making it one of the most familiar provincial cities in Britain, even for people who have never visited. Its fine wide streets and noble buildings – even its pubs – have been the backdrop for countless TV programmes and films, from Morse and Lewis, through the Golden Compass and Brideshead Revisited to Harry Potter.

“Oxford exerts a strong influence on those it touches,” says author Val McDermid, writing in The Guardian on the rich catalogue of fiction set in and around the university and other parts of the city. McDermid read English at St Hilda’s College at the age of 17, one of the youngest undergraduates to study at the college.

In this book, the plot switches between Istanbul and Oxford, an appropriate place to bring certain key characters together in a confined, academic environment to debate the big philosophical question the book poses.

I wrote this about the new service