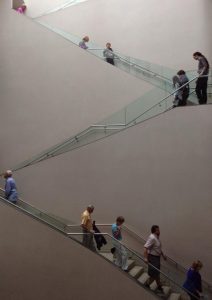 Ashmolean Museum. Photo by the writer

Oxford is one of the most familiar cities in Britain, after London, even for people who have never been there. Its fine wide streets and noble buildings – its pubs too – have been the backdrop for countless TV programmes and films, from C. S. Lewis to Harry Potter.

Now a new rail link between London and Oxford, which opened from Marylebone Station in December 2016, has improved public transport links to the city.

I visited some of the attractions in this day-out or short stay destination. They include Einstein’s blackboard, a Christopher Wren theatre and one of Britain’s best indoor markets.

The connection between Marylebone and Oxford  is the first new rail link between London and a major city in 100 years. It restores long-lost rail connections, such as that between High Wycombe and Oxford, a route closed in the 1960s.

The crucial detail was a new ¾ mile line built at Bicester to link the London to Birmingham Moor Street track with the existing, run-down route between Bicester and Oxford. Track upgrades mean trains  run at up to 100mph. Operator Chiltern Railways operate two services, each way, an hour

The Oxford-London fastest journey time on the new route is 63 minutes. The cities are already linked, via Reading, into Paddington. Fastest time on that route is 55 minutes.

Oxford made it more difficult to visit by car some years ago, introducing a park and ride system, centred on four car parks around the ring road.  You don’t have much alternative if you visit during the day. I recommend you use the park at the Pear Tree Roundabout. The bus journey in to the centre is easier and quickest.

The wonderful Ashmolean Museum of Art and Archaeology (see photo), said to be England’s oldest museum, was given a complete remake in 2009.

There are 39 new galleries in the new building, designed by architect Rick Mather. Spread over five floors, they provide double the display space of the former premises.

Thousands of objects previously in storage can now be displayed. They include rare and fragile items, able to be shown thanks to new environmental controls.

The museum’s focus extends from archaeology – there is an important display on the excavations at Crete, led by Oxford professor Arthur Evans – to Impressionism. A recent acquisition is Édouard Manet’s Portrait of Mademoiselle Claus. In 2014 the Ashmolean raised £7.83 million to acquire the painting and keep it in the UK. It is one of the most important Impressionist paintings in the country. Fanny Claus was a renowned violinist and close friend of the artist’s wife.

The marvel of Oxford is that so many attractions are within an easy stroll of the railway station. Shops, colleges, the excellent covered market and gracious buildings such as Christopher Wren’s Sheldonian Theatre are all close together. A favourite walk of mine leads via the City Museum to Christ Church College, (the Great Hall is Hogwarts Hall in the Harry Potter movies). Uniquely in the Church of England, the chapel, as Oxford Cathedral,  serves both the college and is the Mother Church for the Diocese of Oxford.

A man in a shiny bowler hat (most Oxford college porters are similarly attired) patrols the main gate on St Aldates. The walk leads on through the water meadows alongside the Cherwell, past the spot where James Sadler became the first Briton to fly (in a balloon, and why isn’t he better known?) in 1784, to the University Botanic Garden, the oldest in Britain.

Then back to the Bodleian Library (its Divinity School is the Hogwarts library) for the one hour tour.

In 2015 the Weston Library, Oxford’s newest library, reopened after an £80m renovation. As well as being a research library, it has become a tourist attraction. Visitor numbers were “more than double” those expected in its first year. The library, originally known as the New Library, and opened by King George VI in 1946, is linked to the University Bodleian Library across the road. It is home to four of the 17 pre-1300 copies of Magna Carta.

The Pitt Rivers Museum is one of my favourite museums in the world. It reopened in May, 2009, after a Lottery-funded makeover. This is a spectacularly diverse collection of the objects that make people different. Splendidly old-fashioned display cases are crammed with the unexpected – Hawaiian feather cloaks in brilliant shades of red and yellow, ceremonial ivories from Benin, actors’ masks from Japanese Noh dramas, baskets in so many shapes and sizes, Inuit fur parkas, decorated moccasins and magic amulets. Lt.-General Pitt Rivers launched it with a gift of 18,000 objects in 1884, some collected on Captain Cook”s Voyage in the 1770s. Later travellers added a further 300,000 objects. In many cases, the labels are the original ones attached to the item on display.

This museum adjoins the Museum of Natural History, with its dodo and display on Alice in Wonderland. It was here where Charles Darwin’s disciple Thomas Henry Huxley, “Darwin’s Bulldog”, debated the Theory of Evolution on his behalf with Samuel Wilberforce in 1860. It was a key moment in the wider acceptance of evolution.

Admission to this and the Ashmolean is free.

Even if you have never been there, I think you already know Oxford, through Morse and Lewis, the Harry Potter films, the Golden Compass and Brideshead Revisited. You could easily navigate a route around the settings for so many books, TV series and films, but the city’s official guides know where the bodies are buried, so to speak, in Jericho and the other blood-spattered districts of fictional Oxford.

Other tours take in the haunts of Iris Murdoch and Dorothy L. Sayers, the Victorian art of the Pre-Raphaelites, some of the finest stained glass in Britain, and much more. J.R.R. Tolkien is another past Oxford resident. The best place to detect the aura of, and connect to, this great writer is in the environment where he lived and worked, and that principally means Oxford. He came here in 1925 to become Professor of Anglo-Saxon, a post he held until 1945.

It wasn’t so long after, in 1928, when he is believed to have written the first line of the Hobbit on an exam candidate’s blank paper: “In a hole in the ground, there lived a hobbit”.

Tour guides have the direct route into the colleges, settings for many a TV drama. These ancient cloisters, in the heart of the city, may seem a little snooty. But they were here first, some as early as the 1200s, and their main function is still education not tourism. You may visit, on certain days, for a charge, although it is possible to peer in for nothing through wrought iron gates.

Experience Oxfordshire runs an Oxford “official guided walking tour” starting at 4 PM. It is aimed in particular at new visitors who arrive in the city during the afternoon, to give them an overview of Oxford, so they can plan and make the best use of the remainder of their time.

The University and City Tour passes through the heart of the historic city centre.

When Albert Einstein gave a lecture in Oxford in 1931, adding detail to his Theory of Relativity, a quick-thinking organiser had the foresight to remove the blackboard with the five lines of (to many of us) totally baffling Picasso-like equations which the 20th-century’s leading  genius had written, encase it in a glass frame and put it on display, safe for posterity in the Museum of History of Science.

This is another in the city’s rich clutch of museums. Said to be the world’s first public collection, it was founded in 1685. (Admission free.) The scope is science, from antiquity to the 20th-century. In no particular order I liked the microphone on which Nellie Melba sang Home Street Home, a handbook for young chemists on how to make gunpowder, Lawrence of Arabia’s archaeology camera, one of the oldest pendulum clocks, and a wonderfully detailed drawing of the moon from 1795.

Some famous names, literary fiction and a very unusual use of bar profits collide in the convivial old Lamb and Flag on the broad boulevard of St. Giles. Thomas Hardy set the seduction of his hero Jude by the barmaid in Jude the Obscure in this 300 year old hostelry. Graham Greene was smitten by a real barmaid, who the students christened Queen Nefertiti. And Morse, Lewis and Bill Clinton have all “popped in” for a drink. I ordered a pint of Betty Stogs (Skinners Brewery – Champion Best Bitter) and found a cosy nook, content that owners St John’s College will use all the profits to fund research students. The college also own the even older Eagle and Child, directly opposite, where J.R.R. Tolkien, C.S. Lewis (Narnia) and other friends in the Inklings used to meet.

Oxford’s Covered Market has stood here for over two centuries and as you would expect has a long, varied and interesting heritage, as a building from the 1770s. It’s a calm and pleasing trading environment. Most businesses are independent. Some date from the market’s beginnings, or have links to those pioneering market names.

Ben’s Cookies, though more recent, has been here since 1984. Haymans’ fish is sourced from inshore boats around the coast to ensure freshness and sustainability. The Cake Shop has made designer cakes here for 30 years. You can stand outside and watch their skilled artists at work.

Also in Oxford is the first Jamie’s Italian restaurant. It opened in 2008. The illustrious Randolph Hotel in the city centre often pops up in Oxford murder mysteries. I found this account of a visit by a colourful and very real, Welsh poet.

Philip Larkin met Dylan Thomas in Oxford (writes W.S. Graham, in All Speaking Towards You) in November 1941, when Larkin was an undergraduate and treasurer of the Oxford English Club. As treasurer, Larkin went out to dinner with the speakers before the meetings and was one of those responsible for entertaining them afterwards.

“I remember,” Larkin said, “we took Dylan Thomas to the Randolph and George Orwell to the not-so-good hotel. I suppose it was my first essay in practical criticism.”

Larkin was greatly impressed by Thomas’s performance: he wrote to a friend that Thomas was “hell of a fine man… little, snubby, hopelessly-pissed bloke who made hundreds of cracks and read parodies of everybody in appropriate voices.”

What Matthew Arnold actually wrote in “Thyrsis”, describing the view from Boars Hill,  was:

“And that sweet city with her dreaming spires,

She needs not June for beauty’s heightening,
Lovely all times she lies, lovely to-night!—”