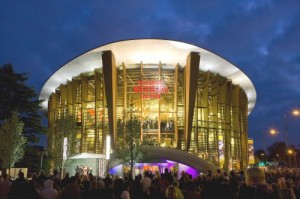 Fancy a night out? No thanks, I'm washing my hair

When it comes to audiences for the performing arts, it’s safe to assume that men and women have differing tastes. I’ve always supposed, although I haven’t seen the evidence, that more women will go to classical ballet performances than men.  And I bet there are more men than women in the audience for a Wagner opera at the Royal Opera house. Or at least it’s the men who buy the tickets.

Plays, and musicals, ought to be a little more unifying, as they tend to deal in universal themes of interest to both men and women. Even a powerful love story, of the literary and musical quality of West Side Story for example, you would expect to have equal appeal across the genders.

There are some musicals, however, which seem to have such a strong attraction to women, while inspiring indifference in men, that you have to wonder if they contradict the first principles of popular entertainment, which is to be “popular” not half popular.

I have personal experience of this. Last week my wife joined a group of 10 other ladies from our village at the new Aylesbury Waterside Theatre to see the touring production of Legally Blonde. She enjoyed the show, which she thought compared well with the movie version we had both already seen. She also noted that women by far outnumbered men in the audience. It was exactly the same for Calendar Girls, recently.

As it happens the friend who organised the outing didn’t ask if any husbands or partners wanted to come along.  I’m not so sure many would have come, even if they would not have felt uneasy about being part of such a large group of women.

The particular appeal this musical to women is clear. It’s about a doughty if apparently ditsy heroine who is dumped by her snooty boyfriend, studies for all she’s worth, wins a place at Harvard, then goes on to a glittering legal career.

There are male parts, and they’re not written so as to make us men feel so entirely foolish by association. However I accept that it isn’t really a “man’s play”.  Just as Calendar Girls is not, even though it is technically about women taking their clothes off.

This leads on to the obvious next question. What exactly is a “man’s play”, or play that can be described in such male-friendly terms that an equivalent group of (exclusively) men, including me, would have gone off in similarly large numbers to see it?

The sad answer to that question is that there is no such play, unless anybody can come up with a suggestion. Not you would not expect to find one covering this particular theme. Women have to work harder to advance in the jobs market at most levels, (if you take out teaching and some other professions)  so you wouldn’t expect to find  a play that celebrated  a plucky man making it through in the jobs market that was biased against his sex (unless it’s about him succeeding as a top nanny, for example).

There’s a powerful theme running through Legally Blonde  which has strong appeal to women, and I don’t think there is a play out there that works the same magic on men.  Something about boxers or football managers perhaps?  Even here the appeal would not be so strong, and  probably would not draw in too many men who weren’t also interested in sport.

What did all those husbands and partners who didn’t go to the theatre actually do that night? Probably, I’m sorry to say, not very much at all.  The last time our wives gathered for a “ladies who lunch” event which was moved to a Friday night in the local pub so that the ladies who didn’t lunch could attend, one of our (the husbands) number organised a rival event for men in the local golf club, based around a curry and several games of pool. Another time someone organised a whisky tasting evening.

This time there was no such rival attraction organised. Nobody suggested that we should go off to see the new Coriolanus movie, a study of a war hero coming to terms with the testosterone-driven world of politics. Nobody invited the rest of us round to watch a video of the Muhammad Ali v Joe Frazier epic. There wasn’t, and I checked, even football on the telly.

The only thing likely to bond a big group of men together (apart from a sporting event) is predictably, something salacious. If the British lap dancing championships was being held locally, I’m sure there would have been an interest.

When my wife returned from the theatre, full of the buzz which we both usually feel after a satisfying night out in company at an event, I felt vaguely frustrated.  We have attended innumerable performances, music, theatre and dance, over the years and this is the first time I have ever felt excluded from something by my gender.

There are good reasons why this all-female event succeeded. Women have a solidarity, more of a fellow feeling, that perhaps makes it easier for them to go out in a group and attend a performance to something that appeals directly to them.  Even if there was an equivalent play for men, would we be so bothered to get together a group to go and see it?

I’m not sure I know the answer.  But I am sure the women had the better deal last night.  And most of the men had a rather sad, lonely and forgettable evening in, in front of the television. That is, unless they took that traditional fallback option, and went down the pub.