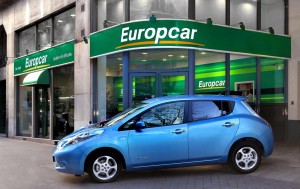 Electric car: worth a one day stand?

In the big electric car debate, two inconvenient truths confront each other.

As far as the naysayers are concerned, range matters. Nissan claim 110 miles for the Nissan LEAF. (People who have driven it say it’s a less, sometimes a lot less, particularly if you drive on motorways, use the air conditioning and blast out too much heating.)

Its supporters counter-claim that this doesn’t really matter, as the daily drive, for most of us, is a great deal less than that. As long as the vehicle can be charged up overnight, there is no problem. Many families run two cars anyway: let them use the other (pertrol or diesel) car for longer journeys.

It is still the case, however, that most people prefer the first argument to the second, and sales for the still quite expensive LEAF, for all its excellent reviews, and the small number of other electric cars now on the market are likely to be sluggish for some time yet.

Now there’s another way to make up your mind about electric cars (EVs), before, in the long-term the market makes your mind up for you. After all, prices will fall, there will be increased battery capacity, and a proliferation of charging points, as well as their clean image, to make buying an electric car an easier choice for millions of us.

Simply go along to Europcar in Marble Arch and hire one.  The company claims to be the first in Britain to offer the electric car as a standard hire option. Trained staff will be on hand to explain how the car works, how to read its energy gauge and presumably what to do if it runs out of power. (Europcar will also be hiring the car in Paris.)

The LEAF’s limited range  should not  worry anybody who simply wants to drive around within Greater London for a day. Traffic congestion would be a far bigger problem if,  for example, if you  wanted to make a tour of the main tourist sites, take in some suburban attractions, and head out to the Olympic Park. There should easily be enough power in the battery for all that.

Europcar will take care of power: they will recharge it completely, free of charge, even waiving the standard service fee usually made for vehicle refuelling

You could comfortably head out to, say, Buckingham Palace or Hampton Court. You should be able to make it as far as St Albans Abbey or Epping Forest.  I’ve never driven a LEAF, but from what I read you would be wise to assume that the range is more like 80 than 110 miles,  which means playing safe with an outward leg of no more than about  35 miles.

There is an excellent, real-life account of driving through London to Brighton and back in a Nissan Leaf on this blog

The car is exempt from the central London congestion charge, which makes plotting a route a lot easier. And it comes with built-in conscience salving. It doesn’t add a single molecule of pollution to the capital’s  grimy, and in some places, toxic atmosphere.

There are fast chargers available in London, even if in smaller numbers than originally projected, to top up the battery in a fairly short time while the driver is out on the road. Recharging from empty to 100% takes eight hours with a normal charger, and 30 minutes from empty to 80% using a quick charger.

This trial availability of the Nissan Leaf is due to last for 3 months, but I hope it will be extended both in time, and to other garages. It’s an excellent way for prospective buyers to find out if they want to buy this car, or other companies’ models, as they come onto the roads of the next few years. It is useful even if it only informs conversation, with so many people so willing to speak in negative terms about the electric car, without even having seen one.