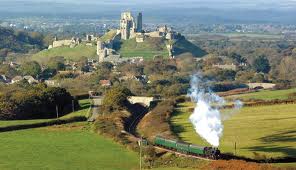 A South Coast resort has been reconnected to Britain’s rail system, 41 years after the link was severed. In its restored state,  running through the picturesque Isle of Purbeck, it’s a line Enid Blyton and her fictional characters would have recognised. Direct steam trains now operate from London several times a year to the resort.

Enid Blyton spent many summer holidays in and around Swanage. “The hills and sea are magnificent. My husband’s golf course is glorious, and we play there every day.”

This landscape is much as it was when Enid Blyton set her Famous Five stories here, and the restored steam railway, which she would have know well, riding it on her visits. is the perfect prompt to anybody who wants to create a mental backdrop to those tales. Try Corfe Castle station, when a preserved steam loco pauses at a platform lined with porters’ barrows, piled high with suitcases.

Then pack lashings of ginger beer and hunt down the locations.

Enid told a rattling good yarn, for all her political incorrectness. She set her smart child detectives Dick, Anne, George, Julian (and Timmy the dog) on the trail of smugglers and other hapless villains along its rugged coast and around Corfe Castle (Kirrin Island) and Brownsea Island (Whispering Island).

(In 2009 the BBC made the story of her life, with Helena Bonham Carter as Blyton and Matthew Macfadyen and Denis Lawson as her first and second husbands respectively.)

The Isle of Purbeck, through which the railway cuts an elegant curve, is on one of this county’s abrupt and intriguing gear changes. (To see how much gears it can change here, just look across the water to the burgeoning city of Bournemouth.)

Most holiday resorts around the coast of Britain are well served by the railways. The closures of the mid 20th century removed some severely loss-making lines and saved money. Yet people in large parts of rural Britain were isolated, unless they had a car.

Seaside places such as Blackpool and Bournemouth and Brighton, as well as smaller destinations – Whitby and Tenby are good examples – kept their link to the main train system.

Swanage was one popular south coast resort which was, for no good financial reason, cut off from the main line network. It lost its link in 1972, which means that today most visitors and holidaymakers arrive by car.

43 years on, that unfortunate, and in retrospect unwise, closure has been reversed. Swanage and the Isle of Purbeck have been reconnected to the main network, thanks to a £1.47 million Government grant.

That doesn’t sound a lot, and it isn’t. That’s because most of the line has already been relaid by enthusiasts, 7 miles of it through the Isle of Purbeck, (not a real island, but a beautiful tucked-away coastal corner of the county behind a high ridge) to the seaside resort of Swanage.

The private railway already runs steam and diesel trains to Swanage from a park-and-ride station at the line’s northern terminus at Norden. The additional money is being used to upgrade track and bridges on the existing three mile single line  from Wareham on the London to Weymouth main line. Without the enthusiasts’ work the cost of restoring the entire line from Wareham to Swanage would have been prohibitive.

The Swanage Railway intends to re-establish a daily service to connect with main line trains from 2015. Excursion trains already run to the resort. Now they will be able to more easily be able to connect from the national rail system, following work, just completed, to make a points link on the main line. To add to the sense of history, the railway has signed a 25-year deal to acquire three classic 1920s Southern Railway engines for the line; one of them ran there in the 1950s.

This railway is more than a service, and a convenience. It’s part of the landscape. Where would you find a backdrop to match Corfe Castle. It sits gaunt and powerful on its high hill above the pretty stone village.

Built by William the Conqueror in a gap in the Purbeck hills to defend inland Dorset from attack from the sea, the castle was smashed up in the Civil War. But enough survived to make it one of Britain’s most impressive ruins, now in the care of the National Trust. if you don’t go in, find a table in the garden of the trust’s tea room next door, order the prodigious Dorset cream tea and study the slightly precarious structure close-up for nothing.

Across the road is the Church of St. Edward King and Martyr, named after our only sanctified ruler, slain here in 978 by his stepmother. There are some good specialist shops. Then you might take the steam train back, or on to Swanage. Don’t tell the Fat Controller, but it’s time to wind down the window and lean out into that nostalgic blast of wind and steam and sea air, just as we used to on that last dash to our seaside holiday.

The Isle of Purbeck, through which the railway cuts an elegant curve, is another of Dorset’s abrupt and intriguing gear changes. (To see how much gears can change here, just look across the water to the city of Bournemouth.)

Purbeck contains Britain’s Serengeti, the Studland National Nature Reserve. Instead of lions and elephants this heathland hosts all six British reptiles – adder, grass and smooth snake, sand and common lizard and slow worm. Heathland, knee-high heather flecked with the vivid yellow of gorse, is nature’s equivalent of the subtle watercolour you might miss in an art gallery, when it’s the most valuable thing there. 25% of the worlds’ heathland is in Britain, and some of the very best is right here. There are nature trails in the RSPB’s Arne reserve, where a true treat is to hear – and see – the Dartford warbler singing its heart out on the gorse on a bright spring morning.

I urge you to walk the soft clifftop turf of this crinkled coast. The 93 mile Jurassic Coast between the Poole and the Exe Estuary is Britain’s first natural World Heritage site. This 185 million year old encyclopedia of rock formations is constantly updated as the cliffs crumble to reveal fresh fossils. It is also the opening stretch of the epic 630 mile South West Coast Path National Trail, starting in Poole Harbour. We walked it west from Swanage, then cut inland for a fine view of Corfe Castle. Next day we walked 2 miles west of Swanage to Ballard Down to meet Old Harry. Not another Blyton character, but a pillar of old chalk downland out among the foaming waves, a dot on the end of a geological sentence.

Another walk took us out to the excellent and eccentric Square and Compass pub at Worth Matravers, full of paintings and photos in cosy low-ceilinged rooms. It is one of only ten pubs to appear in every edition of the Good Beer Guide since 1974. They serve beer, direct from the barrel, and cider through a hatch, along with their own exquisite Cornish pasty. In Swanage itself, the Red Lion is the pick of the pubs that sell food, with the Ocean Bay for ice cream.