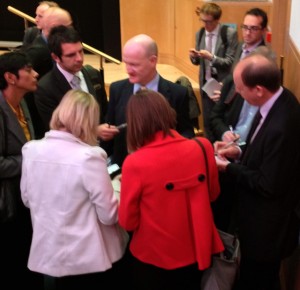 David Willetts MP, Minister of State for Universities and Science, talks to journalists at launch of FutureLearn., September 2013.

I recently read a book, Traveller of the Century, on Underground trains in London. What is remarkable about that? Because that is the only place I read that particular one, on the Kindle platform on my smartphone. I picked it up during those many five or ten unproductive minutes we have on public transport when we don’t have a newspaper and we are too tighly pressed to read one, or a physical book, anyway. This one was always accessible, pages turned at a swipe of the screen. My tube book took a few months but I finished it.

Imagine, then, just as easily doing a course on Introductory Particle Physics, or Innovation and Enterprise, or Muslims In Britain, or Climate Change, or England in the Time of King Richard III while you were standing at the bus stop, or sitting in your seat waiting for a football match to begin, or passing time before you meet a friend in a coffee shop?

This isn’t an article about filling marginal time with an improving pursuit, although you would certainly do that. It is an illustration of how user-friendly and universal the coming revolution in learning is going to be, when anyone with access to a computer, tablet or smartphone will be able to follow a free, degree-level course wherever they are. That could be on the Tube to Tottenham Hale, the hydrofoil to Hyderabad or the bus to Mombasa. Or anywhere you choose.

Time for a very unpoetic acronym. MOOC. I first heard it only recently. Even now I suspect few outside higher education could tell you that it means massive open online course. It is one of those disruptive ideas, like 3D printing, like Internet shopping, that threaten to so shake up an established way of doing things that we can have no notion of how things will look in five or ten years time.

MOOCs are suddenly big in the USA. You might, for example, enrol today on a course on computer science or The Heroic and the Anti-Heroic in Classical Greek Civilisation, given by Harvard University, for nothing, and, if you do it well enough gain yourself a certificate.

Now the concept comes to the UK. In September (2013) The Open University launched FutureLearn, the first UK-led provider of MOOCs, delivering free university courses to learners around the world. These, and other courses in production will have a wide appeal, the OU says, whether people are “studying to improve their career prospects, enrich their lives or enliven their dinner conversations.”

The content can be accessed from a static computer, at a desk. But this is an idea for our times, designed to be followed on mobile devices. FutureLearn has been put together so that learners see, and hear, the same high-definition content, regardless of the screen size.

Courses will be available through FutureLearn’s website, initially as an open beta test capturing learner feedback to inform the way it develops. FutureLearn is a product of the social media age. Interaction will be central to learning. Students will be encouraged to join conversations around the learning material, as they might on Facebook, or vicariously, by following discussions.

Simon Nelson, CEO of FutureLearn said: “We wanted to make FutureLearn a fresh, different and enjoyable user experience. We have designed the website in line with principles of effective learning, such as storytelling, discussions and celebrating progress.”

Online courses, which will be roughly pitched at undergraduate student level, will include video and audio content as well as text articles. This is not, however, an exercise in recycling existing university course material, held together with old film of past lectures. The online material is collated for the specific FutureLearn course, with original content. There will be online teaching assistance from university staff.

Other features, based on the principles which underpin social networks, include “learner profile pages, to help learners build a presence within FutureLearn, interact with and find out more about other learners, and follow and be followed in return.”

Students will test themselves through quizzes, with feedback and hints given after each answer to help learners spot gaps in their knowledge. Progress pages show how much of the course they have completed, and their overall score.

Courses on which people may enrol now or by early 2014 include:

The Secret Power of Brands, from the University of East Anglia.

The Shocking Shallowness of Human Psychology – University of Warwick.

Ecosystems: An Introduction – The Open University.

England in the Time of King Richard III – University of Leicester.

So far learners from over 165 countries have registered their interest in taking a course on FutureLearn.

Martin Bean, Vice-Chancellor of The Open University, said, “Time and again we have seen the disruptive impact the internet can have on industries – driving innovation and enhancing the customer experience. I have no doubt MOOCs will do the same for education – offering people new and exciting ways to learn.”