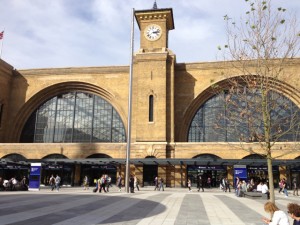 King’s Cross Square, with the station clearly visible behind, first time since 1860s

Yesterday people stood outside King’s Cross Station and celebrated a negative. Empty space. The site of something nobody could possibly have liked, gone forever. Polar opposite emotions to those that would have been felt in 1962, half a mile away, the last time a familiar feature was demolished in front of a station in the Euston Road.

In the case of Euston station it was the Gothic arch, taken down because it stood in the way of developing the modernized station – the outcome was unremarkable. We still lament its loss. Had the Euston Arch survived a few more years, it would probably have been saved by the growing movement to protect important structures.

Back to King’s Cross, a seven minute walk east along the Euston Road. There is a case for describing it as the most famous railway station in the world, serving as the starting point for so many Harry Potter films. It is also the gateway to the north. No train was more illustrious or exciting than the Flying Scotsman, which used to depart every morning prompt at 10.

The station also has an immense, plain brick double-arched facia, under an Italianate clock tower, designed by the architect  Lewis Cubitt. It opened in 1852. Cubitt, we can assume, would have wanted people to walk or ride past and admire his imposing creation. But not many had the chance.

Within 10 or 15 years shops and other outbuildings were being thrown up, without any aesthetic consideration, bang in front of his splendid station. Somebody called this build up of small random buildings the “African village”.

Purists may have called for this ramshackle collection to be pulled down, but they never were. In the 20th century this out of keeping ensemble even included a semi-detached showhouse to promote London’s suburbs.

As if emboldened by the philistinism up the road at Euston, in 1972 British Rail did eventually replace the mash-up in front of King’s Cross, but with an utterly prosaic covered concourse extension. Still the station was obscured. There seemed to be no architectural ambition those days apart from putting up vacuous functional structures that would have impressed socialist Eastern Europe.

There was no interest in even trying to compete with the splendor of Barlow’s station and Gilbert Scott’s grand gothic hotel masterpiece at St Pancras, next door, both of which fading buildings had, by then, a very uncertain future.

There was no thought to integrate this covered concourse with the magnificent edifice behind. I’ve heard that this mood was infected by a reaction to what was seen as extravagant and terribly old-fashioned Victorian architectural style. 20th century politicians were reacting to the values of a century many of them were  born in.

Sweep away those overblown structures and replace them with – what? The featureless,monolithic public buildings of the 1960s and early 70s. Adding just another aberration to the front of King’s Cross was in tune with the times. See them here.

We can close that unfortunate chapter. That mean little lean-to has been pulled down, and replaced with a beautiful stretch of empty space, King’s Cross Square. 7,000 sq m of  Yorkstone and granite paving, ornamental trees and places to sit.

It was opened by Mayor Boris Johnson and the Secretary of State for Transport Patrick McLoughlin on Thursday, September 26, 2013. Architects Stanton Williams note an astonishing point, that this is this first time the station front has been unencumbered, if you don’t count their metal and glass awning to keep the rain off, since the 1860s.

I stood on the Euston Road pavement, on the very edge of what seemed to be station property from where I could see across the square right into the platforms, at any express train arriving from distant parts, Aberdeen or Newcastle or Leeds. I’m not sure you can do that anywhere else in London. The last time you could do this here, the car was still 30 years away from being invented.

What effect do public places such as this have on people? I have no proof, but I’m sure it must raise their spirits. There is so much positive uplift available in the big projects on the Euston Road, in the new St Pancras International, and the new western extension to King’s Cross which opened in 2012, quite apart from in those huge once-derelict acres behind. These stations both offer ample open spaces, with natural light pouring through high soaring glass roofs by day.

An estimated 140,000 people will move across King’s Cross Square, or stand and talk there, or linger and admire, or sit and read. If only 2% of them feel more positive or creative or inspired by the experience, that’s 2800 people. A day. What about all the others who feel more positive and cheerful, and no longer offended by the dreary experience it used to be, without making a direct connection?

What inspirational energy field does the British Library, next door, send out from its lofty redbrick towers to the researchers and passers-by sitting at the cafe on its forecourt. If you’re passing, step inside for another free adrenaline shot to the intellect, in the capacious lobby. You’re a taxpayer: go in. It’s your building.

And then we come to… Euston. I’ve personally directed tourists standing on Euston Road to what is nominally one of our great stations with a despairing hand gesture indicating “it’s sort of over there”, in the direction of the invisible terminal stuck behind office blocks and a curious raised concrete plinth covered in fast-food outlets. The best thing about Euston is its new bus station, and the flourishing real beer pub, the Euston Tap, inside the Western Lodge, one of four lodges that flanked the Arch.

Compared with the restored majesty of St Pancras and King’s Cross, this station is a shambles. Even its wide concourse is cluttered with shops. Ever more busy, it will need a serious makeover before too long, whatever happens with High Speed 2. It can’t be beyond the invention of the architects to find a place for fast food, coffee and retail and give this station the great open space it deserves. For inspiration they only have to stroll down the road to Kings Cross.